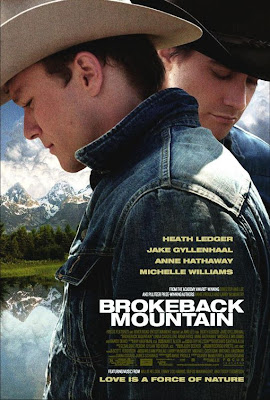 Plot: Brokeback Mountain is the story of ranch hand Ennis del Mar (Ledger) and rodeo cowboy Jack Twist (Gyllenhaal), two young men who meet and fall in love on the fictional Brokeback Mountain in Wyoming in 1963. The film documents their complex relationship over the next twenty years.

My Thoughts: “Love Is A Force Of Nature” I believe much of what true love really is can be summed up to that very quote, love is indeed a force of nature, some will say that you find love, and not the other way around, however I disagree, love is not something that can be controlled, or decided upon, it’s what lies in the soul, and if it’s decided then there’s no changing it’s mind, for a long time I’ve been planning to see Brokeback Mountain but have always put it at the back burner of movies to watch, and I guess for some strange reason I keep putting it off for films that were less then worth watching is because as a film critic and an individual I didn’t want to get mixed up in the crossfire of the controversy that surrounded the film during the time of it’s release, among the masses if you’re a straight guy like myself you’d ether get put into one of two categories, one, being branded a “homo” for liking it, or two, a homophobe for hating it, these were certainly not the choices I’d like to have as both a moviegoer and as an individual, as most of you already know, I don’t care what two individuals do behind closed doors, may it be man and woman, man and man, or woman and woman, I’m ok with it, and neither should anyone for that matter should try to get involved in other’s affairs, because after all, when everything is said and done, all that truly matters is the love, and not who is showing that love to who, call it the one rare thing liberal about me if you will (cause I’m a conservative and a republican by heart and mind) but after finally giving this movie a chance I couldn’t help but feel happy and sadden for seeing such a magnificent film, happy because the film is downright genus work, truly a work of art in my opinion, and sadden because, well, like all love stories, it’s filled with so much romance and discovery which is always surrounded by fear, anger and above all, tragedy, first off, if you feel uneven over the idea of two men making love to each other don’t worry, the whole sex thing in the film was highly over exaggerated by the mainstream media, there is only one real love scene in the whole film between Heath Ledger and Jake Gyllenhaal’s characters. 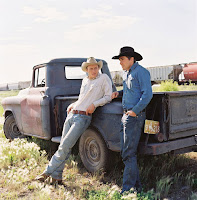 pornographic, it’s (and I will forever regret saying this [laughs]) passionate, the film starts off really slow, introducing both men meeting each other for the first time while looking for work, they both land a job being sheepherder for a ranching company, the two men are stationed near the sheep flock in Brokeback Mountain, at first it’s very slow, not much goes on between the two, they have very little to say to each other and rarely ever look at each other, but as time goes by and the months start to roll in the two begin to feel something between then, here is where things start to pick up, because both men begin to act more loosely among each other, and slowly both can feel there’s something odd going between them and yet they don’t even know it fully yet, well I won’t spoil the scene for you but after the dirty deed does finally happen both men see as a onetime thing that didn’t mean nothing, however even they can’t lie to themselves that it was much more than that, they begin to fall in love with each other, however all things must come to an end, and so does there little thing, after the job was done they go their separate ways, but as the story goes, fate doesn’t allow them to just have this one thing and leave each other for good, the film spans over the course of 20 years and the love that was and could have been so much more.

The plot was phenomenal, nothing short of top notch storytelling if you ask me, the directing w

as beautifully executed by director Ang Lee, he has made a masterpiece for the new and old era alike to enjoy, and truly deserving the Oscars in won, the film manages to do what others have failed at, and that’s helping those who are uncomfortable with the idea of homosexuality, first by introducing our main characters as your usual heterosexual man, at first they act as friends, but over time they get to know each other, and slowly shown as two individuals in a time of extreme prejudice towards gays, slowly fall for each other, yes it may still sound unsettling for some, but trust me when I say on film it’s really not, I’m not saying the film will make you scream out you’re no longer intimidated or afraid of homosexuality, however Brokeback Mountain manages to peel away the unsettling feelings we have on the subject, and show that in a world filled with war, hate, fear, and despair, sometimes love no matter how, who, or where it comes from is the only thing we can truly hold on to and call our own. I really enjoyed myself while seeing this, like I said, at first I didn’t want to be taken in by the controversy, but now I see the controversy was nothing more but mere propaganda to stop those from watching it, but the most intriguing part is the fact that though this film is about two men, the love story behind it is as universal as any other love story ever told, and can be felt by all on some level, that my friends is what I call real movie making.

The story is about in the year 1963; two young men are hired on as ranch hands in the Wyoming Mountains. During the long months of isolation, an unusual bond starts to develop between them, one which they are only vaguely aware of--until one night when it raises to the surface in a passionate encounter. When the season ends, they part ways, only to realize the true depth of their feelings. Thus begins a decades-long affair that the two of them desperately try to hide from those around them one which will prove to be simultaneously beautiful and greatly devastating.

As for the acting; well I can tell you that aside from his exhalent performances in films like

2008’s “The Dark Knight” Heat Ledger gives a breath taking performance, without him this film wouldn’t be as great as it was, he breathes life into his character, and pours such power and sincerity behind it that it’s almost as if a part of him was put into the role, it’s sad that such a fine and talented actor such as him is no longer among us. Jake Gyllenhaal was outstanding, he matched dead on for the role, and some could say it’s because the two had already have a friendship outside of the film long before talks for it being made into film came about, I say that’ a loud of BS, he matched the role because he is a fine actor, and proved it in many previous films before this, and I’m confident he’s going to continue to do so as time passes. Michelle Williams was fantastic, her acting was a real sight to see, and what makes it even more interesting is the real life back-story behind making this great film, the fact her and Heat Ledger became an item while making this film could tell you that if it wasn’t for working together on Brokeback Mountain their love for each other would have never happened, meaning Ledger would have left this earth without a symbol of the man he truly was (the daughter with Williams is proof of the good man he was). Anne Hathaway was spot on, her acting has proven to be great as her beauty which is nothing sort of hypnotizing, I’m glad to see her out of the kid flicks and into the real grown up stuff. Linda Cardellini, Kate Mara, and Randy Quaid just to name a few were also a real treat to see in this, and even though their roles are small, it still adds to the overall art of this film and in some way helps add to this already near perfect masterpiece.

Final Say: Brokeback Mountain was a real treat, I must admit that when going into this I had the thought that this would turn out to be a homophobes worst nightmare, but instead what I got was a painfully beautiful love story of a forbidden love that wanted to become more than just what it was and yet could never be, this film is in my top ten films that should come for 2004, and among my all time top favorite films (which should be around 40 to 50 films by now). If you have one ounce of love in you, then I highly recommend this film to you.
Copyright 2008 TCWreviews.com
All Rights Reserved
Posted by Clifford Kiyabu at 4:32 AM