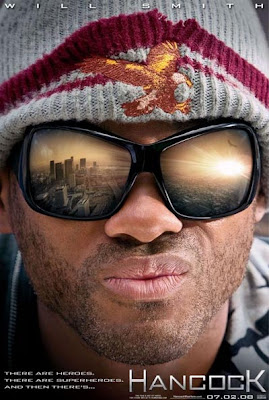 Plot: A hard-living superhero who has fallen out of favor with the public enters into a questionable relationship with the wife of the public relations professional who's trying to repair his image.

My Thoughts: What is a Hero, that is the question?, some would say a hero is someone who saves lives, however this is both true and false, a hero can be anyone doing just about anything in the eyes of those who have been saved and doesn’t always have to mean literally, a hero doesn’t always get the hero’s praise that they deserved, while others are worship for doing little or nothing at all but just simply being the hero in the eyes for some is all that’s needed, to be more general on the matter brings me to the subject of “Superheroes” who in most cases are always looked at as those who uphold the peace and justice for all, they are looked upon as pure do-gooders who are as good and pure in the light of divinity can be, some would even go as far as to say to be a true superhero is almost to be holy,

asically most are usually stereotyped into being like “Superman”, when referred to as “pure” or “do-gooder”, do not mistaken someone like “Batman” as a hero when making such an analyses because there is a huge difference between a superhero and a vigilantly when doing such, but I’m going over my head with this and swaying of course now [Laughs]. the conclusion to my explanation of the term “Superhero” comes boiling down to this; people never see their favorite hero when the chips are down, in fact most people won’t even give into even the slightest of thought of how they’re reaction would be to such a horrible thing, because to give into such a thought would be giving into the thought of defeat, and to acknowledge defeat of one’s hero is to be defeated yourself, which is why when the film Hancock came around my neck of the woods I couldn’t help but become extremely intrigued by the plot, because it was the first time I had seen, then alone heard of a movie in which the hero of the story is hated by those he saves. I mean here is a hero who at one point could very well have been the greats superhero this world has ever seen, but when he couldn’t be the hero people wanted, his image took a dive, and let me tell you; when he fell, he fell hard. And so with spending some many years of being in the gutter ridiculed and deride by the general public he turned to drinking fallowed by simply not caring anymore what the world thought of him or the people who needed saving, in other words this film was really a tale of a hero who needed saving for a change.

The plot is pretty much solid with the exception of a few plot errors here and there, I was

amazed at how the fantastic the special effects was, it sure was a real spectacle treat I can tell you, and the film even carries some really good laughs as well as some very touching moments that will make even some of the coldest of hearts tear up, the only problem I had however was the lack of villains, with a film that has a superman like hero the villains come off as less then common thugs who luckily get the drop on our hero, however some will argue that the lack of villains is because the real villain is the one our hero must fight within himself to become a better person, either way I feel that if there is to be a sequel a villain with power that ether equals or at least come near to Hancock’s, also the other problem I had, but I don’t think of it as a problem, but as an awkward feeling during the film, see the film’s overall feel takes a dramatic change a few times, first the film starts of as you’re usual Will Smith action comedy, but then around the halfway point, the film’s overall feel takes a huge change and suddenly becomes more like a straight out drama than anything else with fewer and fewer laughs as the time role, however by the time it’s nearing to the ending the film takes a very dark tone, with it playing more to the seriousness than anything else and here is where people may find themselves tearing up a bit, however before the film can wrap up to credits it falls back into the light tone it started off with in the beginning, like I’ve stated, it’s not really a negative for the film, but more like a bold leap of fate, ultimately it proves as a somewhat plus for them taking such a risk, and for that I give the filmmakers kudos for doing such.

The Story is about; There are heroes... there are superheroes... and then there's Hancock (Will

Smith). With great power comes great responsibility - everyone knows that - everyone, that is, but Hancock. Edgy, conflicted, sarcastic, and misunderstood, Hancock's well-intentioned heroics might get the job done and save lives of man, but always leaves a jaw-dropping trail of damage in their wake. The public has finally had enough - as grateful as they are to have their local hero, the good citizens of Los Angeles are wondering what they ever did to deserve this guy. Hancock isn't the kind of man who cares what other people think - until the day that he saves the life of PR executive Ray Embrey (Jason Bateman), and the sardonic superhero begins to realize that he may have a vulnerable side after all. Facing that will be Hancock's greatest challenge yet - and a task that may prove impossible as Ray's wife, Mary (Charlize Theron), insists that he's a lost cause, but never the less the fight to fix a broken hero will prove to be a fight both Hancock and Ray will have to face.

As for the acting, I don’t think I have to tell you that Will Smith was fantastic, like all his film

he gives a 110% of his talent to the movie, which is a rare thing now days as most actor don’t usually give it their all in every film they shoot, some will give their talents to some films and then just phone it in for the rest of the time, but not Smith, who is simply amazing, he can make you laugh and when you least suspect it, cry. Jason Bateman who sadly I must say I am not a huge fan of, was, OK, he did an ok job but I honestly don’t see the hype some have for him as I find his style a little dry for my taste, it’s nothing personal as I’ve seen may interviews of him and he seems like a pretty nice guy, but for the life of me I can’t take in his performance without feeling a little nauseated after. Charlize Theron was wonderfully great; I must say I don’t really fancy her as much as other actresses when it comes to acting because I find her acting to be a little too ordinary, but she really came out in this one that even caught my eye; her chemistry with both Smith and Bateman was simply amazing and felt quite authentic, it was like watching a group of old friends having a world of time together and even more so breathless at times. Eddie Marsan who more or less portrayed the villain in this film did great; he did a nice job making you want to hate him as the bad guy.

Final Say: Hancock was a really good film, and even though it carries a few errors you can’t help but ask what films don’t in these times? Either way I had a magnificent time viewing it, it’s well worth taking a look see especially if you’re a will smith fan, then this is a must see, Hancock it defiantly a film I’d like to take another viewing soon, if you’re in the mood for a good film with laughs, mystery, nice FX and some very touching moments then I recommend Hancock!
Copyright 2008 TCWreviews.com
All Rights Reserved
Posted by Clifford Kiyabu at 2:27 AM