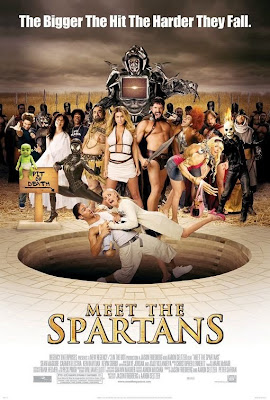 Plot: The heroic Leonidas, armed with nothing by leather underwear and a cape, leads a ragtag group of 13--count ‘em, 13!--Spartans to defend their homeland against the invading Persians (whose ranks include Ghost Rider, Rocky Balboa, the Transformers, and a hunchbacked Paris Hilton--no one is safe when the Spartans take on the biggest icons in pop culture).

My Thoughts: 2007 was a year of many great film releases, one of which was a stunning and fantastic film called 300, it was so outstanding that during the film’s last minutes I was overcome with strong emotions, some of sadness (Because the ending was sad) and some of pure enjoyment. I loved every single bit of it, so much that till this day it remains one of the fewest of few films to ever receive a 10/10 on my behalf as a film critic, and believe me when I say I’ve seen a Lot of films in my lifetime. So it did not surprise me that not even a full year had pass before a spoof based on it would be made, after all it is one of the best films of 2007, so a parody is expected, just not one as soon as Meet the Spartans however, long before the film had been released fellow members of the film critics community had already criticizing that it was going to be by far the worst film ever and so on, I on the other hand knew it probably wasn’t going to be anything worth seeing, not even if it was free, but I believe that no film should ever be judged by a film critic unless that critic watches it from start to finish, no exceptions, and as a film critic I stand strongly by my belief through and through, no matter how much people told me it was bad I still held back my judgment on it until I saw it for myself, now since I did not want to waste money at the theaters to see it, I waited for it to come out on DVD, what I saw left me… speechless, but not at all in a good way I promise you that, I can’t begin to explain just how horrible this film was.

Actually I take that back, I most defiantly can! [Laughs] if I had to choose between watching

films by Jason Friedberg and Aaron Seltzer, or Uwe Boll (God forgive me for saying this…) I’d choose Uwe Boll any day of the week, now with that said I don’t even like Mr. Boll the least bit, but that shows you just how much I can’t stand the idiocy that is Friedberg and Seltzer, their style of film making is basically this; and this is how they’ve made all their films, according to them if you want to make a film spoofing another you need not see the actual film but only it’s teaser trailer, because you get a little insight on what the film is going to be like and you can have it out as soon as the real film is out or even maybe sooner… yes you read that right, they don’t even watch or do research on the film their spoofing, just watching a minute half teaser trailer is more than enough according to them to make it a good spoof, how ridiculously dumb are they to even think that, aberrantly very severely from what I see after watching this train wreck of bad one liner jokers and poorly done spoofs, I mean their style of filmmaking is so idiotic that even someone who is blind, deaf and suffering with Mental retardation would look be a Steven Spielberg of movie making compared to these two idiots, but then again some could say that they do this deliberately on purpose because they make these movies on a budget that can be considered next to nothing compared to the amount of case they walk away with after each film, and how is this possible you might ask yourself, because they spoof any and everything connected to modern pop culture.

which is why they make sure all their movies receive a PG-13 rating by the evil MPAA, so out of their viewing audience only a small handful will be returnees, but these two don’t and won’t care because by the time their next film is due out in theaters there will be a brand new set of naïve adolescents awaiting to see what will only disappoint all. I for one continue to see their films for one reason and one reason only which is the same reason I continue to see everything made by Uwe Boll, to judge these films to the most honest extent a film critic like myself can, and also because no matter how much I dislike filmmakers like these I feel everyone should (even though many will disagree) be given the benefit of the doubt. But still aside from that this film was so horrible that by calling it horrible actually is being kind to it, the film has no real plot, just a series of failed dick and fart jokes that basically go like this; dick joke dick joke fart joke fart joke, and repeat until film’s runtime is over, the whole film basically tries so hard to kick everything that has been in the mainstream eye in the last six nine mounts prier to its release and mash it all together as one movie, not to mention they do so in such a sad way that I actually feel a great deal of sympathy for the actors and actresses who had participated in this film, I mean the embarrassment for being in a film that is as mine numbingly stupid as this is beyond comprehension.

The story is about Writers/producers/directors Jason Friedberg

and Aaron Seltzer (DATE MOVIE, EPIC MOVIE) use the film 300 as the basis for their latest spoof. Born to be the perfect Spartan, Leonidas (Magiure) faces numerous trials en route to becoming a man, including a face-off with the penguin from Happy Feet. Once he has proven himself, Leonidas not only becomes king, but also marries Margot (Electra). When Leonidas learns that Persia's King Xerxes (Davitian) plans to make Sparta his own, he has his captain (Sorbo) recruit Sparta's finest and prepares them for battle against invading Persian forces. Unfortunately, that amounts to only 13 half-naked men with painted-on abs who literally prance to their destination. To make matters worse, Spartan councilman Traitoro (Bader) is, well, a traitor. Still, Leonidas and his men face their enemy in battle, riffing on Stomp The Yard, Ghost Rider, Transformers, and numerous other films along the way, as well as the video game Grand Theft Auto. Freidberg and Seltzer poke fun at virtually every recent cultural phenomenon and pop culture personality, including Britney Spears, Kevin Federline, and Paris Hilton, Dancing With The Stars, American Idol, and Deal Or No Deal. Even Ugly Betty makes an appearance.

As for the acting, well, I don’t think I need to tell you that there isn’t anything here that I c

an honestly deem worthy of praising but for the sake of fairness here we go, for starters; Carmen Electra who in my opinion is nothing more than a pretty face with a body to flaunt around, and if it wasn’t for her sex appeal she would been just another piece of talentless garbage in Hollywood, who uses sex to gain attention, her acting was downright awful, it was like she didn’t even try to act. Sean Maguire was probably the only thing more horrible than Electra’s performance. Unlike her however he does act, problems is he over does it by a mile, what could have been vertically hilarious jokes turned into uncomfortable and rather embarrassing moments, even as a view I felt embarrassed just watching, so imagine how some of the actors felt acting in it. Though it was nice seeing actor Kevin Sorbo on the big screen again I can’t help but ask; is this what he’s been forced to resort to? I mean he was once the man back in the day, I myself grew up watching "Hercules: The Legendary Journeys”, and it’s a real let down to see such a great actor such as him fall so greatly as to act in a film like this, in fact you could see that a part him thought the very same thing as he phoned in his lines on screen. Ken Davitian was horrible, the sad thing is I’ve seen him in quite a few movies now and I’ve always thought his acting was kind of good, but now I’ve lost some respect for the man after seeing this film. And for the record; any film that has Method Man in it is probably not going to be good at all.

Final Say: why oh why to people make such horrible films I’ll never understand, then again why do film companies allow such abominations such as the likes of this to even see the light of day? Seriously though, I have nothing personal against the film nor do I have a personal vendetta against the filmmakers, I am but a humble film critic that only judges to the full extent as a critic can and nothing more, I live to serve the people, and as your humble servant let me tell you; Meet The Spartans is not worth the money it took to make it, nor is it worth the time god gave each and every one of us on this earth, I highly DON’T recommend it, avoid at all cost.

Copyright 2008 TCWreviews.com
All Rights Reserved
Posted by Clifford Kiyabu at 5:37 AM