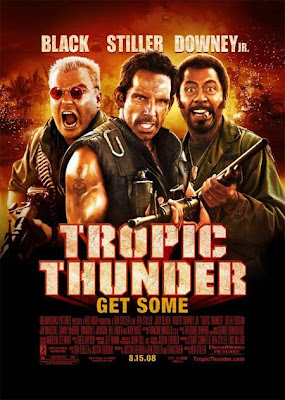 Plot: Through a series of freak occurrences, a group of actors shooting a big-budget war movie are forced to become the soldiers they are portraying.

My Thoughts: Summer films are always known to be the films with the biggest of budget and usually the most anticipated of the bunch, which is why summer is known as the “POPCORN SESSION” for Movies, but with high anticipation also comes disappointment, many of the films never quite live up to the hype that is driven by it from moviegoers, but I must say that summer 2008 has been kind to me with an almost flawless summer for me, with great films like; The Incredible Hulk, Kung Fu Panda, Wanted, WALL·E, Hellboy II: The Golden Army, Hancock, The Dark Knight, and now Tropic Thunder, this has got to be one of the best summer for me and movies in a really long time, never have I had such a great time with so many great films and so little bad ones, it’s just so unbelievable and it true, any true moviegoer like myself will tell you this, and will remember summer 2008 as a dream come true for going to the movies.

ong time, ever since the fall of good spoof films in the late 1990’s it has become pretty bad for this particular genre with little or no hope in site, however, that is until Tropic Thunder came out, and let me tell you, I knew it was going to be a fun film to watch, however I didn’t expect it to be this fun, I was caught by surprise by the fake trailers presented before the actual film starts, I was laughing so hard I was dam near in tears, and that’s technically not even the film yet, and just when I though I couldn’t laugh any harder than I did, the film started to play, then that did it. I spent the entire time trying to catch my breath due to how hilarious the film was, I believe my eyes, the film basically is a great big spoof on Hollywood, but done right for a change, not to mention it look like about half of Hollywood showed up to be in the film, whit so many cameos left and right, I was left in awe, the film is greatly entertaining for both the action fans as well as those looking for a day full of laughter, the plot is outrageously fantastic.

I was amazed at how well written it was, given you a strong plot that doesn’t give up for a single

moment, and so many memorable moments that it’s a film that will stick with you long after you’ve seen it, one scene in particular is a scene which involves Jack Black’s characters tide to a tree, and in an attempt to get someone to free him he offers a perform oral sex on whoever frees him, “I'll Cradle The Balls, Stroke The Shaft, Work The Pipe And, Shallow The Gravy!.” You can imagine just how shocked the audience was by hearing that, the entire room laughed so hard that it could be heard from outside the theater room, [Laughs], With all the action, all the laughs, this is easily the best comedy of 2008, and probably one of the best of the last ten years or so, the plot which is written by Ben Stiller, Justin Theroux and Etan Cohen is so fantastic that I’m convinced it’s a piece of pure genus, and with the cameos of so many of Hollywood’s A-listers you can’t go wrong, to sum it all into a much simpler terms; if Rambo, Platoon, Apocalypse Now and Zoolander had a wild orgy, Tropic Thunder would be its offspring, I seriously did not think I would have this much of a good time watching a Ben Stiller film, I most certainly will be looking forword to his next project!

The story is about a group of self-absorbed actors set out to make the most expensive war film. But after ballooning costs force the studio to cancel the movie, the frustrated director refuses to stop shooting, leading his cast into the jungles of Southeast Asia, where they encounter real bad guys.

As for the acting; Ben Stiller is outstanding, though at times his performance can be seen as

unoriginal he still manages to give a few surprises that are very much enjoyable. Jack Black was fantastic, much like Ben Stiller; there are many moviegoers that don’t care for his out of control style brand of comedy, however rest assure that in this film he does hold some of it back for when it is needed, and let me tell you when the time calls for it, he sure has heck brings it! However the real attraction in this film is none other than Robert Downey Jr. who I cannot tell you in any way possible that will give it the justice he so greatly deserves, his performance is nothing short of magnificent! I found myself at time wanting to see him more on screen than any of his co-stars, to be completely honest it’s just something you’d have to see for yourself to understand, I knew he could act, but damn I didn’t know he could ACT! This is without a doubt one of his best. Brandon T. Jackson was awesomeness all around, as playing Alpa Chino the only black man in the movie they’re making in the movie, his chemistry with Robert Downey Jr.’s character, Kirk Lazarus who is a white guy playing the only black sergeant in the film works magnificently well together for an army of racially based jokes that will have everyone laughing, Jackson has a bright future ahead of him I can tell you. Jay Baruchel who is no stranger to the business has always played second string and often left in the back, however this time around he stands in the back no more; he stands besides the great actors of this film and proves his worth. Funny man Steve Coogan who is well known overseas but not so much here in the states has really made himself know this year with Hamlet 2, and now Tropic Thunder, though his role his small, much like a well oiled machine he is as much of an important component to the film to make it work. Nick Nolte was a real treat, I knew right off from the start his part was going to be pretty hilarious, just didn’t think it would be as hilarious as it turned out to be which I can tell you is a big plus in my book! Matthew McConaughey was great! And at the same time I felt at odds with him, because as most of you know he’s one to always take lead role in a film and never second string, but surprised ,e with this role and did exactly what I didn’t think he’d do and manages to rock the hell out of that role as well! And last but not least; Tom Cruise was, well, shocking! Don’t think for one moment that you know the guy when it comes to his style of acting, he goes way off his usual stuff with this role, and rather you like him or not this is a must see for Cruise lovers and haters alike.

Final Say: Overall I had one badass time watching Tropic Thunder, it (in my opinion) has got to be the best spoof film I’ve seen in well over ten years, it reminded me of the old spoof films of the 70’s and 80’s, which is a nice change of pace for once, I mean with all the crap Hollywood has flushed out over the years I didn’t think such a film like this would ever be possible, but now I see there is still some hope left in the world, and here’s to hoping for more films like this in the near future. I highly recommend it!
Copyright 2008 TCWreviews.com
All Rights Reserved
Posted by Clifford Kiyabu at 1:25 AM