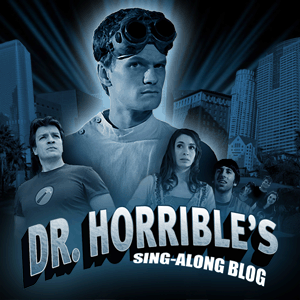 Plot: An aspiring super villain must balance his career and his pursuit of a beautiful do-gooder.

My Thoughts: In every tale of Good Vs Evil the story is usually told from the point of view of the hero, and the hero is almost always presented as this “Knight in Shining Armor” and the villain as, well, the villain.

However this is not the case with Dr. Horrible's Sing-Along Blog, written 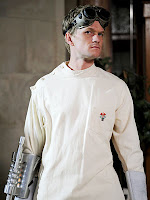 by writer/director Joss Whedon, his brothers Zack Whedon and Jed Whedon, and Jed's fiancée, actress Maurissa Tancharoen. The musical was written during the WGA writers' strike. The idea was to create something small and inexpensive, yet done on a professional level on the internet through the form of three webisodes splitting the movie up into three acts, which were titled Act I, Act II and Act III, all three acts run approximately 14 minutes each, and chronicles the life of a low rent super villain known only as, Dr. Horrible (Neil Patrick Harris) who posts video blogs of himself on the internet of his attempts of being excepted into the prestigious Evil League of Evil led by the legendary Bad Horse, but he’s attempts of impressing the League enough to accept him are always undone by his nemesis, Captain Hammer (Nathan Fillion) who seems to always shows up in the nick of time to stop him at every turn. Aside from having to face off with Captain Hammer almost constantly he also struggles with the fact he is secretly in love with a girl named Penny (Felicia Day) whom he sees at the coin Laundromat once a week, and he tries but always seems to fails at every chance of making a romantic connection with, which ironically Penny starts dating his nemesis. Much in the same theme of Whedon’s other works (Buffy the Vampire Slayer and Angel) Dr. Horrible is not your typical Super Hero film, but instead tells us the villain’s side of the story for a change, and the hard struggles that comes with the territory of being the bad guy. 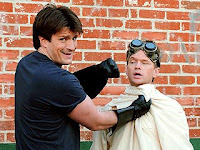 m will have you, you’re rutting for the villain. Dr. Horrible shows the loneliness that comes with being a mad scantest and contains a lovely blend of Sci-Fi and Dark Comedy, topping it off with a nice musical setting making this easily one of the best Whedon experiences I have had in a long time, and this is coming from someone who is a long time fan of his works. It may not be a long film to watch, nor is it big budgeted, but it’s still very enjoyable and a must see film in my opinion, also I’d recommend seeing it twice, because if you have purchased DVD than the second time should be viewed with the audio commentary on because it’s a musical commentary with brand new musical tracks performed by the cast and crew. This is without a doubt a must own for any movie buff in my opinion.

The story is about; Dr. Horrible, an aspiring supervillain with his own video blog, is attempting to join the prestigious Evil League of Evil (led by the legendary "thoroughbred of sin", Bad Horse), but his plans are usually foiled by the egotistical superhero Captain Hammer. Horrible's life is thrown for a loop when he falls in love with Penny, a beautiful and optimistic advocate for the homeless he meets at the Laundromat, a situation which complicates itself even further when Penny begins dating the boorish, oafish Hammer after he apparently saves her life. Faced with the task of impressing the League, can Horrible overcome his own incompetence to ruin the day, kill the hero, and still get the girl?

As for the acting: first off, Neil Patrick Harris is the man when it

comes to awesomeness, he’s just one of those actors who gives off an energetic feel that is hard not to like, many may remember him from his early years of starring in "Doogie Howser, M.D." and in the more recent hit CBS T.V. Sitcom "How I Met Your Mother", but it seems that on an overall look at his career, he’s generally an unappreciated actor in the business and isn’t used as much on the big screen as he should. However with that said he was outstanding in this, he steals the show completely as the one and only Dr. Horrible. Not only does he do the role justice with extreme dedication, but he does so with a pretty decent set of vocals. Nathan Fillion was incredible, some might remember him from the short lived T.V. series "Firefly" which also spawned a movie “Serenity”, as an actor Fillion puts a lot hard work into his roles, and does a magnificent job as the narcissistic yet overly cheesy hero. Captain Hammer, which believe me when I say; the word “cheesy” doesn’t quite fully explain just how into himself he really is. Fillion does the role very well with a blend that mirror’s Captain America’s superhuman strength with Superman’s “Boy Scout” morals, but with the intelligence of an Imbecile. As for actress Felicia Day, she does a very enjoyable performance as Penny the Laundromat girl, and the love interest to both Dr. Horrible and Captain Hammer, Day is best known for her role on the online shorts “The Guild" and does an impeccable job in this. Actor Simon Helberg is known for his dorky personality in T.V.’s "The Big Bang Theory", and lives up to that reputation extremely well as Dr. Horrible’s evil yet dorky moisture buddy. Moist, who is always moist, I’m not sure how that make him a villain [Laughs]. Nick Towne, Jed Whedon and Rob Reinis, who do the “Bad Horse”, chorus was hilarious as heck. Actress Maurissa Tancharoen, who took part in the writing of this film, has a small part as a Captain Hammer groupie and even has a small singing role does a nice job.

Final Say: Dr. Horrible's Sing-Along Blog was outstanding, it’s Joss Whedon at his best, it reminded me a lot of the musical episode of Buffy the Vampire Slayer “Once More, with Feeling”, which as it stands to be one of my all time favorite episodes of the shows entire run, rather you’ve seen the show or not, this is still however a must see and I highly recommend it!

Copyright 2009 TCWreviews.com
All Rights Reserved
Posted by Clifford Kiyabu at 2:03 AM