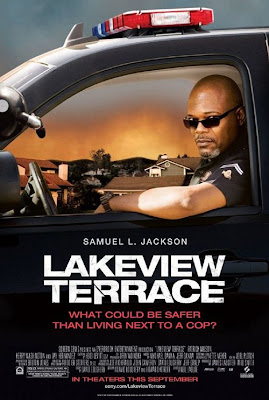 Plot: A young interracial couple move into their dream home and are increasingly harassed by their next-door neighbor, a tightly wound black LAPD officer. When the couple decides to fight back the feud turns deadly.

My Thoughts: Racism has been among us for as long as man has been able to walk the earth, it spans to all race, creeds, religions, and cultures. And though as humans we have come a long way from the type of aggression and oppression that was considered okay, much of us still continue to carry this inner hatred for what we don’t understand, and as you know, we fear what we don’t understand, and fear only causes more hate and pain. The thing is fear and hatred is not bound by the color of one's skin, but rather lives hand in hand with all cultures. Sadly though, even though many have changed with the times, so has racism, to such a point as where it has sup-levels of it carrying over through society’s generations.

Lakeview Terrace shows this very thing in its most profound and

straight forward attitude. Samuel L. Jackson’s character, Abel Turner, projects the very kind of hate I talk about; here you have a middle aged African American cop who fathers two children by himself in the suburbs, he has no problem working side by side with cops of other ethnic groups, he will even gladly lay down his life for anyone of them without hesitation if it came down to it. However when a young interracial couple moves next-door to him he has a serious problem, thing is when it comes down to interracial relationships, practically black and white couples is where he draws the line, he cannot and will not accept the ideology of a white man and a black woman having intimate relations with each other, he simply won’t have it, not in his home, and certainly not in his neighborhood. The film starts off slow and quite calm, and like all films dealing with such a topic it introduces the situation of racism lightly with only mere hints here and there for at first. This of course gives us a chance to know the individual characters one by one, which believe me is a nice thing to see, far too many films fail on this subject in a big way, and trust me when I say I have seen a lot of good films go crashing down on the note of poor character development. Which of course brings me back to Jackson’s character again, Abel Turner, who is without debate a downright hatful person at best; because the things he does in this film made me want to hate him, but, as much as I’d love to hate him, I felt a great deal of empathy for him. Don’t get me wrong now; he is after all one racist A** hole, and I do not agree with ideals, but after learning a little of his back story however, I really empathized him because he wasn’t always this way, he did after all start off as a good man, but one very bad event in his life lead him down the path of hatred and self-loathing.

The pace of the film moves very nicely, it doesn’t rush into things like some films unfortunat

ely do, and it certainly doesn’t drag itself too slowly, it had keep me guessing how it all will conclude until the very end. It has a pretty decent plot, nothing to out of the ordinary and certainly not a bore-fest. Does it have problems? The answer is yes! It does have problems, many in fact, but not so much in the way that would ruin the experience of the film. I will say however, that if there was something about the film I could change it would be two things, the first being the rating, with a film such a topic as racism I felt making the movie for an aimed audience (a. al PG-13) I felt that more could have been done and said on film if the film was made as an R-rating and not PG-13. Because of the rating soo much was left out on what could have made this film truly great. The second problem is the ending, though I was satisfied with the overall performance of the film, I was a little dissatisfied with how it ended on two levels, the first being that though the movie runs on a nice pace, the ending is a little rushed, in the sense of it happens all too fast than it should. The secondly; the overall massage the ending brings, which is the lesser of would it should have been, the ultimate massage the film ends on is simply good prevails over evil, rather than hate will be your undoing and only through forgiveness can you be redeemed of past mistakes. But still despite my dislike of how it all came crashing down in the end, I still liked it very much, and so should anyone who enjoys a thriller that keeps them guessing.

The story is about; Chris Mattson (Patrick Wilson) and Lisa Mattson (Kerry Washington), a young interracial couple, have just moved into their California dream home when they become the target of their next-door neighbor, who disapproves of their interracial relationship. A stern, widowed-single father of two, LAPD officer Abel Turner (Samuel L. Jackson) is the watchdog of the neighborhood. His nightly foot patrols and overly watchful eyes bring comfort to some, but he becomes increasingly harassing to the newlyweds. The persistent intrusions into the lives of Chris and Lisa ultimately take a turn for the worse when the couple decides to fight back.

As for the acting; first off, Samuel L. Jackson does it again by pulling off the role of a bad a**, you

love to hate him, and he loves to put people in their place. Jackson is one of those rare actors who have ability to be loved and hated at the same time, and almost always a bad-motherf*****, he pulls of the role of Able Turner extremely well, in fact so well that see him as the actor, but as the character. Patrick Wilson was great here, but I must admit that there are times where I feel as though he is holding back at what he could in the role, which more or less a little dissatisfying, but still I give kudos for a nicely acted performance. Kerry Washington does a wonderful job alongside Patrick Wilson who plays her other half in this; they carry a nice on-screen chemistry together. Ron Glass is a fantastic actor whom I enjoy watching on screen, I’ve seen a great deal of his past work and I must say he’s good; however I was displeased with the fact that he was very much absent in the film overall, very underused if you ask me. Jay Hernandez is very good, not the best, but still did well. I did however like the chemistry he and Jackson had together as partners in the police force, which was the perfect display of brothers in arms. Regine Nehy and Jaishon Fisher did okay performances; they both gave off a strong energy that siblings naturally give off, like constant bickering with each other. Keith Loneker was just not doing it for me, he’s a pretty okay actor, but I wasn’t really feeling his performance in this one.

Final Say: Lakeview Terrace was a very enjoyable film that give a new take on an age old topic, though incredibly flawed and certainly won’t be wining any Oscars anytime soon it is a film however that will entertain movie-buffs all around. I recommend it for a night in with some friends and a couple of cold ones.

Copyright 2009 TCWreviews.com
All Rights Reserved
Posted by Clifford Kiyabu at 5:44 AM