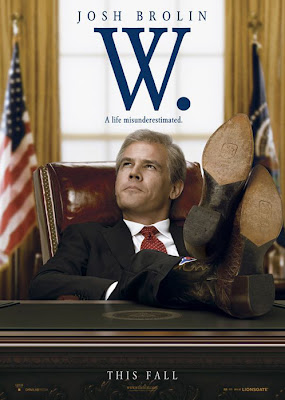 Plot: A biopic on the life of George W. Bush, one of the most controversial, secretive, cynical, and ruthless president in USA history, chronicling from 1967 to his wild and carefree days in college, to his military service, to his governorship of Texas and oil businesses, leading to his 2000 candidacy for president, his first turbulent four years to his 2004 re-election campaign.

My Thoughts: They say a man’s place in history is depicted by his actions in life, and by what those actions are will decide how history will judge him, whether than who he really was, you could say that one’s entire existence will be remembered not by what was right or what was wrong, but decided upon by those who’ll write it. The office of the President of United Sates of America has been an honorable title and leadership among the world, and it’s brought forth a deal of great men throughout the years, some in time of need and in time of great sacrifice, some so great that till this very day they are as loved and admired by people near and far as much as the day they took the oath of office, however the office of the President has also brought forth men that were deemed by the masses as out of touch, incompetent and generally not made for such a prestigious title. One of these men is George W. Bush. Known around the world as the worst president in U.S. history, people from cost to cost, from world leaders to the common man, all have expressed loudly and proudly just how much they loathe him. But whether you love him or hate him, can you really say that you know him?

cted by acclaimed director Oliver Stone, the man who brought forth such controversial films like; JFK, Nixon, and World Trade Center, now bring us a film that gives an insight into the life of the 43rd United Sates president. The film is split up into two parts being told at the same time going back and forth on each other, the first part deals with the events just after the 9/11 attack and leading up to the coming days of the Iraq invasion, much of it expresses that though Bush was wrong on many of his decision makings not all of the buck was his felt, and that he was not solely responsible for everything within his administration since a good portion of it was based on faulty information handed up the chain of command , The other part is told from Bush’s early years in collage and how he met his wife Laura Bush some time after, this part of the story deals mainly on how he found his faith and how he beat alcoholism, and the tough times he went through while trying to get into politics, but mainly it sort of gives the viewer an insight on some of the actions he made later in life were due to some family issues early in life. He and his father George H. W. Bush was never quite on the same page with each other, and that he was always stuck within his father’s shadow, which lead to his running for governor and later president, much could also be said the same about his decision to invade Iraq was partly based on getting done what his father could not the first time around, and that if he had won the war his father could not maybe he’d step out of his father’s shadow of achievements and step into his own. The film also explores the Bush name and shows that it’s much more than a name, it’s a dynasty. W. is not a film that is pro-Bush nor is it Anti-Bush, it’s a biopic that actually humanizes him as a person to its viewers. Rather you supported him or not, this film shows it’s viewers that he’s a human being just like you and me, And in some way empathizes him, I won’t say you’ll be screaming out in support of the man or his views after watching it, but you’ll feel some form of empathy for the man, because his early years deals with a lot of common problems that most people can relate to in one way or another.

in the right place, his mind was not, and because of this his dreams were simply out of reach. One scene in particular in the film does this is a dream sequence where he’s playing baseball in a stadium, he’s trying to catch the ball but the ball never comes down, this symbolizes that he went to achieve a dream that he wasn't capable of doing: to prove to his dad that he can make him proud. But that was just all a dream that he never achieved. Like the ball that never came down, he could not make the ideals he went into office possible, another scene that is most memorable is one where a journalist asked him what was his biggest mistakes, and for a moment he could not answer, and he could not come up with s single word to justify his actions, and for this moment the viewers are looking deep into the soul of a broken man who we called the president and saw that even he realized the mistakes and flaws of his character and could not answer for them. It’s defiantly not a truthful telling of George Bush, some stuff is in fact very fiction based and here say, but what this film does is allows you to take another look at the man many hate so much and allows you to judge him differently this time around. Personally I was never a supporter of his politics even though I’m a conservative, I did not agree with a lot of what he did in office and what he believed in for this country, however I will admit that after watching the film W. I have a new found respect for him as a human being, maybe not as a U.S. president, but as a person he has my respect. The only problem I really had with the film is that a biopic such as this should have not been made this soon, something like this should have been put off a good ten years or so before being made, so for me it was a little unsettling seeing since a lot of this we just lived through. Other than that this film was pretty decent and is worth a view.

The story is about; whether you love him or hate him, there is no question that George W. Bush is one of the most controversial public figures in recent memory. In an unprecedented undertaking, acclaimed director Oliver Stone is bringing the life of our 43rd President to the big screen as only he can. W takes viewers through Bush’s eventful life -- his struggles and triumphs, how he found both his wife and his faith, and of course the critical days leading up to Bush’s decision to invade Iraq.

r the acting; Josh Brolin was fantastic as George W. Bush, he’s done his homework well for this part, Brolin gets so deep into character that there are times in the film where you can easily get fooled into believing he really is Bush. Elizabeth Banks does an outstanding portrayal of Laura Bush, but I must confess that I had a small problem with her in character, noting about her acting in the film but rather the makeup work, for someone who’s supposed to be the first lady she remains extremely hot and young looking, now I’m not saying the real Laura Bush isn’t good looking, but Banks tends to look like Banks in this. James Cromwell gives an fantastic performance as George Bush senior. Ellen Burstyn was spot on as Barbara Bush, Stone made a wise choice in picking her for the part. Richard Dreyfuss was fantastic as Dick Cheney, although I feel he didn’t quite look the part as some other actors who would have made a better visual likeness, but his portrayal on the other hand was just spot on. Scott Glenn is a great actor with a lot of great film under his belt, but I’m going to be honest here, I just wasn’t feeling his portrayal of Donald Rumsfeld, I think he could have done a much better job. Ioan Gruffudd is a wonderful actor, and did a pretty good job portraying Tony Blair, not as spot on as another actor who played the part (Michael Sheen from “The Queen”) but still a nice performance. Toby Jones was not so good, I tried to like his portrayal of Karl Rove but it just wasn’t happening for me, he did a somewhat poor performance in my opinion. Thandie Newton is a magnificent actress, but I really felt that she was holding back on her performance of portraying Condoleezza Rice, she was visually the striking image of Rice with the help of makeup, but in performance, not so much, I think she could have done better. Jeffrey Wright does a very exceptional job portraying Colin Powell; I didn’t think he’d match the part at first, but after seeing his performance I admit he did a spot on job.

Final Say: W. was a very enjoyable film and met my expectations, it’s defiantly not Stone’s best film, in fact nowhere near it, however it’s still a very entertaining film indeed, my only beef with the film is that it shouldn’t have been made this soon, Stone should have waited a few years before making this film. atill though, I recommend it!

Copyright 2009 TCWreviews.com
All Rights Reserved
Posted by Clifford Kiyabu at 3:58 AM