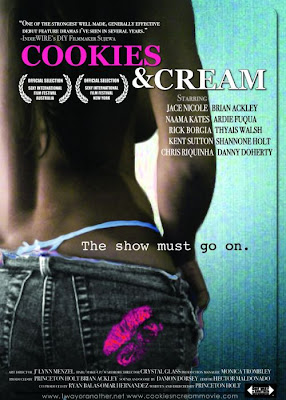 The story is about: a deep character piece that centers on a young woman named Carmen (Nicole), a racially mixed single mother who accepts an adult entertainment job to take care of her daughter and herself, all the while trying to find love in the process of living in the big apple.

My thoughts: Many people go through life without knowing what their purpose is; some won’t ever know what that purpose is. Still though, time waits for no man and life continue to move forward whether you’re with it or not, or as they say in show business “the show must go on”.

Cookies & Cream is the first feature film by Writer/Director Princeton Holt and produced by his own production company One Way or Another Productions, and is an Official selection of the Sexy International Film

Festival. The film is a character driven piece that is about a young woman who accepts a job in the adult entrainment field doing pornography for money so that she can support her 8 year old daughter, the film takes its viewers deep into the life of Carmen (Jace Nicole) a girl who is driven to work for her money regardless, the film shows that she isn’t happy with how her life has turned out at the moment but continues to do it because the most important thing is her child and it doesn’t matter how unhappy she is so long as her child is taken care of, but aside from supporting her daughter the film expresses her deep loneliness that comes with the territory of doing adult films, because of what she does and who may have seen it, she keeps a shield of armor up over her emotions and doesn’t allow things to progress far enough for it to become something truly and deeply real. At first glance the film may look and feel like an X-rated skin flick to the viewing eye, however after given a few minutes the film opens up as a touching film with a lot of depth and an incredible sense of weight within its story, though some might argue that the lack of the daughter's presence in the film is an incredible gap in the plot, but I disagree, because this is a character piece which focuses on the individual and not everything else. the film had such meaning behind it that I felt as though I was right there alongside the characters, which I really enjoyed the concept and direction that Holt took the story in, which believe me could easly be summed up to a bittersweet ending. There were however a few things I had problems with, the first being the film’s deluge which felt a little drowned out at times and a little like gap fillers for the most part, but nothing too harmful that would seriously hurt the film in any real way though.

The second thing is the audio dubbing that goes on throughout the film, which trust me is

nothing wrong in any way, dubbing actually helps improve the sound quality of the film’s audio, and all films to an extent need dubbing to improve sound quality, but for me it felt a little off on some parts, so sometimes it’s okay and works extremely well, but sometime it’s just hard to get into and left me a little adrift, but of course don’t let that put a damper on the film overall, as I’ve stated before; Cookies & Cream was great and very enjoyable indeed, it’s pacing may move a little slower than some might hope for, but does tell a very adequate story about a young woman living life in its whole realism form, it’s certainly not going to paint you a pretty picture to look at nor is it going to give you that typical corporate big budget Hollywood ending that so many are used to seeing in movies now days, but tells you that life goes on and whether you’re on board with what’s going on or not it will continue to move forward, which I agree with the film’s massage there is no real happy ending for anyone, just life, Holt is a breath of fresh air and projects an unique and somewhat uncanny style of filmmaking that reminded me of the late 80’s and early 90’s of filmmaking, and I personally think that with time he will become an even greater filmmaker, like all creative artiest, they all have their rough spots that need to be smoothen out, and I very much look forward to Holt's filmmakings in the near future.

or the acting: most of the cast did an equally fair job in their performances and I wouldn’t want to single any of them out for their high and low points… who am I kidding, of course I am, it’s what I do! [Laughs] Jace Nicole an actress who is very new to the business, so new that Cookies & Cream is actually her first film; it wasn’t that she did a bad performance, but rather holding back, as a viewer I felt that she could have been an incredible force to the picture if she had pushed a little harder in the role. Anyway, normally I would seriously rip on an actor or actress for their performance (if it’s bad) without a care in the world if they read it or not or if they simply want me to go straight to hell for what I have to say about them, but since Nicole is new to it all I’ll give her some leniency (just this once because I’m a compassionate film critic, and I stand proudly by my motto “Everybody gets one”) so since this is her debut I’ll give her kudos on doing a fairly okay job. Brian Ackley did an okay performance, though I did feel he could have done a much better performance then what he gave, but still it proved to be on an okay enough level for me to tolerate. Rick Borgia and Thyais Walsh did pretty decent playing the part of Carmen’s parents, though I did have somewhat of a problem with actor Rick Borgia, noting wrong with acting, which was very good by the way, but rather his appearance, he just naturally looks like one of those wise-guys you see in all the mob movies than a soft hearted father, which I certainly hope he takes as a complement than an insult. Naama Kates, Danny Doherty, and Derek M. McAllister and the rest of the cast did alright performances.

Final Say: Cookies & Cream was a film I had known practically nothing about going into, so with that I generally had low expectations and middle level standards set for the film, and by my surprise the film came out very enjoyable and was a terrific experience. Princeton Holt is defiantly a name I will be looking out for in the near future. I recommend it!
Copyright 2009 TCWreviews.com
All Rights Reserved
Posted by Clifford Kiyabu at 2:47 AM