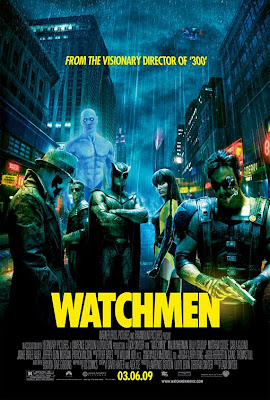 Plot: When an ex-superhero is murdered, a vigilante named Rorschach begins an investigation into the murder, which begins to lead to a much more terrifying conclusion.

“This city is afraid of me. I have seen its true face. The streets are extended gutters and the gutters are full of blood and when the drains finally scab over, all the vermin will drown. The accumulated filth of all their sex and murder will foam up about their waists and all the whores and politicians will look up and shout 'Save us!' And I'll whisper 'no'.”

My Thoughts: September 1986 is a date which holds a fond eventful memory for those within the comic realm, this date will forever be remember as the date

when acclaimed graphic novelist, Alan Moore realest the first issue of his masterpiece mini-series Watchmen, a mini-series that would forever change the way we see comics everywhere, in other words, what Alan Moore wrote could easily be called the “Holy-Bible” of modern age graphic novelization, he redefined the meta-fiction of the graphic novel medium in his own image, and the people saw that it was good, and so it became. Nearly twenty-three years have passed since the series started its twelve issue run, and since then talks of a movie has been circulating around in the mix but never brought to fruition, it seemed that the possibility of a film ever happening was beyond possible, and even after the film “that would never get made” was finally made so much legal red tape was thrown against it that soon the film was known as the film that would never get released, but after a long and heavy battle against all odds fans young and old who waited patiently for far too long finally got their wish. And my oh my did it gleam with satisfaction. Director Zack Snyder wowed audiences everywhere with the stunning film 300, and some speculated and worried that he could not provide us with an encore of such epic magnitude. I myself recently for the first time in my life picked up a copy of the Watchmen graphic novel and gave it a read. I admit my intentions was originally to prove that this book was in fact not the all divine tale that many had make it out to be and revile it as a vastly overrated and if not Un-worthy of such a title… but as it turned out, I too was wrong, and I fell in love with the Watchmen like so many others before me and after, I became a victim to its complexity of in-depth storytelling that was just superb, and to be completely honest, I was deeply moved by every word I read, because it’s a book that carries so much raw emotion and power within it’s very pages that I honestly could not believe my eyes as I turned each page anxiously awaiting what was to happen next, I could not believe that such a graphic novel actually did in fact exist!

uld ever be handled properly on film as it was panned down on book, so know that as hype up for the film I was, I still had very low expectations because I felt as though the film would never live up to its full potential. Well the time had finally arrived and with the long wait only moments away from being over, there I sat waiting for the lights to dim and the film to start rolling. To my surprise the opening scene practically made my jaw drop, I could not believe what my very own eyes were seeing, there for that moment my heart skipped a beat and there I was overwhelmed with hope and feeling as giddy as a child on Christmas morning. Snyder proves that he isn’t a name that’s here today gone tomorrow, but in fact here to stay and make his mark on the world as a filmmaker. The film, though changed in certain areas of the plot and outcome for certain reasons, still carries the same might the book holds and then some, though it may not be exactly like the book due to some of the changes. Much of the concept still remains on film and told in the very same aspect as the book while at the same time not falling into the books shadow, but instead shines in its own light of beauty. The presentation of the story from book to film was done remarkably fantastic, it was like watching art come to life before my very eyes. The pacing was unbelievably gratifying, though a little shorter than I’d hope for in the run time (it clocked in just under 3 hours but would have loved seeing it clocking in at around 3 and a half hours). The scoring was outstanding; the score is orchestrated by music composer Tyler Bates in such a beautiful manner that it contains the very epic foundation of the film in its entirety, and let me not forget to mention the 1970’s/1980’s music setting that plays throughout the film works extremely well and does more than authenticate the film’s era but also gives it a strong sense of realism that is undeniably creepy and yet exciting. Finally, after finishing this film I walked out satisfied, and though it may not have been 100% exactly like the book, I was content with what I saw and I’m happy with that, overall It is defiantly a worth watching film, my only regret however was that I didn’t see it on IMAX.

he story is about: set in an alternate 1985 America in which costumed superheroes are part of the fabric of everyday society, and the "Doomsday Clock" - which charts the United State's tension with the Soviet Union - is permanently set at five minutes to midnight. When a former superhero named The Comedian is murdered, the washed up but no less determined masked vigilante Rorschach sets out to uncover a plot to kill and discredit all past and present superheroes. As he reconnects with his former crime-fighting legion - a group of retired superheroes, only one of whom has true powers, Rorschach glimpses a wide ranging and disturbing conspiracy with links to their shared past and catastrophic consequences for the future. Their mission is to watch over humanity... but who is watches the Watchmen?

As for the acting: it was fantastic. Jackie Earle Haley steals the film with his outstanding

performance as Rorschach, every scene with him in it was a scene to remember, I honestly can’t see anyone playing the role after witnessing his unforgettable performance, I may not have been a fan in the past but after seeing Watchmen I’m now officially a Jackie Earle Haley fan. Jeffrey Dean Morgan did a great job as The Comedian; he acted the role with such dedication that he was the perfect match for the part. Patrick Wilson though wouldn’t have been my first choice for the part of Nite Owl II surprised me with an excellent performance that was more than satisfying. Carla Gugino was dead on perfect as Sally Jupiter aka Silk Spectre I, the flashback scene with her posing for the “Minutemen” group photo was what got me, it was freakishly right out from the book. Malin Akerman was gorgeously stunning as Laurie Jupiter aka Silk Spectre II, though she made the character appear very different than appeared in the book, she managed to still hold the magic that her character has in the book (on a side note am I the only one that thinks Malin Akerman looks a hell of a lot like a young Lucy Lawless???). Billy Crudup did fantastic as Dr. Manhattan, not only did he act the part extremely well, but he gave the character his own personal touch, which believe me is nothing short of spot on my friend. Actor Matt Frewer gave a great performance as Moloch the Mystic, the odd thing is before I read the book I knew nothing of who was playing this part, however I still pictured the actor in the role when I read the book, so perhaps this was a sign that he was meant to play the part, any way, he did a spot on job in doing so. My only beef with the cast of this film would have to be none other than actor Matthew Goode playing the part of Ozymandias, the thing is, the actor is a damn good actor none the less, however I think he did not match the part and therefore was left a little disappointed with the fact that they couldn’t pick someone else he would have fitted the role better. Either way this small bad apple doesn’t hurt the film in any way for me and still enjoyed it as much as I did from the beginning.

Final Say: Watchmen was a very satisfying film for me, the emotion and power the book holds and carried onto screen with this magnificent adaption, it is defiantly a worth watching film not to mention a worth buying film, I can tell you now that Watchmen is without a doubt in my mind one of this year’s best films and I enjoyed every last drop of its ecstasy, I hope to see it again very soon. I highly recommend it!
Copyright 2009 TCWreviews.com
All Rights Reserved
Posted by Clifford Kiyabu at 6:46 AM