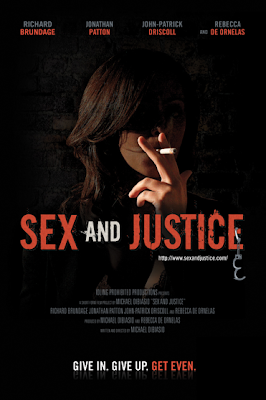 Plot: A pair of frustrated detectives and a confessed murderess goes up against a corrupt but recently vindicated District Attorney in this throw-back neo-noir crime drama.

My Thoughts: Sex and Justice is a movie short written and directed by Michael DiBiasio. The movie is a forty five minute short film that surrounds an unorthodox police interrogation of a young woman who has confessed of being a murderess, but as soon as the police and the district attorney begin the interrogation new suspicions emerge from the young woman’s motive and suddenly the hunters become the hunted. It was a very intriguing film to see; the whole film takes place during a single police interrogation, the integrator (the district attorney) does not wish to abide by the policies of processing the suspect and wants to go straight into interrogating her before police have had a chance with her themselves , but as soon as it begins suspicions begin to arise on the district attorney’s part, and questions begin to surface that will put the district attorney in a situation where he’ll be having to answer too, the film has a nice twist towards the midpoint of it that puts the viewer on the edge of their seat wanting to know what will happen next with a surprising ending that I was not expecting. Though not at all in anyway the same as Basic Instinct nor was it ever meant to be like it, it still gave off this tension that was in the same tone, Sex and Justice was fairly enjoyable, though I will say it isn’t perfect, there was after all some part of the plot I had problems with,

The first being the fact that so much story is talked about in this film, but not shown whi

ch isn’t all that much of a bad thing, but when you have a film that generally gives off this hug sense of weight much like this one did it makes you wish you had more to go with beforehand, and because of this I felt a little unsettled, mainly because I feel that the film should have been a little longer than it turned out to be, there was just so much more I wanted to know before the end and was more or less left in the dark. The pacing was fairly decent except for a part just after the midpoint; there was this scene of uncomfortable silence that felt a little out of sync with the rest of the film, which was a slight problem for me but not in a big way. Though I will say that I’d very much like to see some kind of continuing story or at least another short that includes some of the characters for this film, because I fairly enjoyed the individual characters with the exception of one particular one (Detective Bryant) which I felt was done a little over the top.

The story is about: Sex and Justice is the story of four people ensnared in a complex web of murders and vengeances. It begins with the unorthodox interrogation of a confessed murderess (Elizabeth Fiara, played by Rebecca De Ornelas) whose interview soon causes new suspicions to form around her interviewer - recently vindicated District Attorney Norman Turner (played by Richard Brundage). Turner’s corruptions are already well known to Detective Robert Bryant (aka “The Texan,” played by John-Patrick Driscoll), but the extent of his partner’s (Detective Robert Montgomery, played by Jonathan Patton) involvement in the entire affair remains a mystery.

As for the acting: Nothing against actor John-Patrick Driscoll, but I felt that his portrayal of a Detective Bryant aka “The Texan” was a little too cheesy and overlay stereotyped, but still as an actor he manage to still do very good job, so I will give him that. Richard Brundage gave a very nice performance as the district attorney Norman Turner, he gave the character a nice cynical touch to it without making it obviously noticeable. Jonathan Patton did a fairly okay job portraying Detective Montgomery, but I would have liked to see him push a little harder in his performance than what he gave, but still he did do a fair job in the role. And last but certainly not least actress Rebecca De Ornelas did a great performance as the alleged murderess Elizabeth Fiara, she gave the character a dominant show of force while at the same time showing a sexy femininity, she sure was a treat for these viewing eyes and deserves much kudos for a great performance.

Final Say: I enjoyed viewing this Neo-noir crime drama; though Sex and Justice had its problems I would still very much like to take a second viewing again one day. I recommend it!