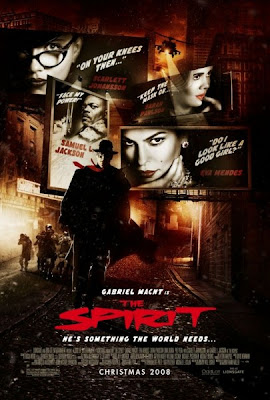 Plot: Rookie cop Denny Colt returns from the beyond as The Spirit, a hero whose mission is to fight against the bad forces in Central City.

My thoughts: on June 2nd 1940 comic legend Will Eisner published Spirit Section #1 which was the first appearance of the masked vigilantly “The Spirit”, Eisner the man behind the creation of the crime-fighting fictional character didn’t quite know that what he created would soon become a monumental foundation piece for graphic novelization. And for years now there have been a number of attempts made in trying to turn it into a live action film. And in all attempts there has been nothing but failure after failure. This ultimately halted any further talk of future attempts.

ake a shot at making the impossible, possible, with Miller having achieved a massive amount of fame for the hug successes of his two previous works adapted to screen (“Sin City” and “300”) no one would dare deny that he has what it takes to make a film like this happen. However, what is the result of when you allow one legendary comic artist to take the helm of another legendary artist’s work? A disaster of epic proportion is what comes out of it. The film is simply a mess of things that just don’t work well together as a finishing product, it’s not that Miller is bad at filmmaking, but how he handled the direction he took The Spirit in as a filmmaker, the film is without a doubt a visually stunning flick with some very beautiful graphics and cinematography work, and it just so happens to be an all-star cast filled with some of Hollywood’s most gorgeous A-list actresses, and not to mention the entire premise of the film carries pretty size amount the comic, it’s funny as well as mysterious with hints of action meets drama into the mix and it’s got a highly respectful name behind the director’s char. One would think that these are all the right marks in making a great film, and yet it isn’t. So what went wrong you might ask? Well the problem doesn’t lie within the plot or the film in general, but rather within the choices made by Miller himself in both filmmaking and in writing the screenplay, the thing is this; Will Eisner’s work on the spirit had a nice blend of mystery, action, horror and even comedy all wrapped up nice and tightly into his comic with a little red bow, but on the other hand Miller tried too hard to incorporate his own writing style of storytelling into Eisner work but altering presence and motives of each character and giving them mind numbing dialogue that is so cheesy that it doesn’t have a praying chance at being taken seriously, not to mention the fact that there was way too many scene in which are meant to be taken seriously but end up coming off more like a joke than anything else.

uation. You don’t try to change a work of art into something that it isn’t, but rather try to understand its perfection and go with the flow on its terms and not yours. Personally; Miller’s work is a favorite of mine among the comic writers, but what he did to Eisner’s work was pure blasphemy to the graphic novel medium, and it will take me a long time to forgive him for causing such pain. However this does show as a sign of proof that as good as a comic may be, three attempts should show as proof that not all of them should become a live action film, and some things are best left in the pages of art. I will say though, that the film did have “its” moments where it wasn’t so bad, and maybe, just maybe a small part of you feels a bit of guilty pleasure for enjoying these moments, but still, when you allow the film to fully boil down in the back of your mind you realize that it’s still a bad movie and you can’t help but wish that so much wasn’t changed. But I will say this; I have a strong feeling that despite it being a hug let down among the critics, moviegoers and fans in general and it bombing at the box-office I think that with time this movie may gain a cult fallowing based upon the certain celebrities starring in the film and or Frank Millers name being attached to it. I won’t recommend this film to buy because I honestly don’t want you to throw your hard earn money away like that, but I will say that if you really want to see it than renting it would be your safest bet. And hey, if you just so happen to like it, then go out and get it, otherwise don’t bother with this flick.

The story is about: Adapted from the Will Eisner's graphic novels, "The Spirit" tells the story of a man who fakes his own death and fights crime from the shadows of Central City. The Octopus -- who kills anyone unfortunate enough to see his face -- has other plans. He's going to wipe out the entire city. The Spirit tracks this coldhearted killer from the city's rundown warehouses, to the damp catacombs, to the windswept waterfront...all the while facing a bevy of beautiful women who either want to seduce, love or kill the masked crusader.

the acting: what can I say, this film has nothing but top notch actors in the prime of their careers, and yet it’s got no appeal, all the actors felt out of sync, like they were acting in completely different movies from each other, none of the chemistry between them seem to work well and half the time some of them seem unsure of themselves or at least unsure about the directions they were getting from the director. Gabriel Macht was a bit of buzz kill for me, I mean he acted the part of the Spirit quite terribly to be honest, during the scenes that were supposed to be sad and full seriousness I laughed, and during the scenes that were supposed to be funny I cried, but not in that “oh that’s so sad” kind of cry, but the kind that makes you say “why! Why must I watch this person act so… badly! Why lord why? ” maybe I’m overreacting or maybe I’m still making him sound better than it really was, but damn, he really killed it for me. Sarah Paulson gives a performance which I found hard to stomach, why is that? because she phones in her performance most the way. Eva Mendes was a letdown for me, I’ve been a fan of hers since the first time I saw her in a movie which was the film “A Night at the Roxbury”, and let me tell you; the very first time I saw her playing the part of the Maid of honor I said to myself “damn, this girl is going places” and in that respect her career has in a big way jumped. But when I saw her performance as “Sand Saref” in this film, I was very disappointed because it was like she didn’t even try to act, it was more like she was just reading lines of a cue card and using her sex appeal to cover for her lack of performance. Jaime King was a little offbeat in her role as “Lorelei Rox”, I loved her in the film “Sin City” but I felt that she was torn between wanting to do this film and having to do it, maybe I miss read her body language wrong but that what I got, it was really mixed. Scarlett Johansson did fairly nice, she may have looked drop dead gorgeous but as talented as she is as an actress, she was still lacking terribly in the acting department, sad thing is, I love her films and have never missed a film of hers yet (this can easily be because I personally have a thing for her) so with that being said, for me to say that about her in this film means something right? Paz Vega was… okay, I’m going to be completely frank with you here; her only reason for being in the film is to be eye candy for the male audience’s pleasure and nothing more, because if there was something else other than that than I was not convinced. And last but certainly not lease is my man, Samuel L. Jackson, who plays the part of “The Octopus” arch nemesis to the spirit. It saddens me to say this but; he overplays the part in a hug way. Everyone knows that when Jackson takes on a role he doesn’t play it, he becomes it, problem though, the role is so corny that it ends up playing a number on him instead. Given the cheesiest of dialogue in the entire film, Jackson is hardly given any chance of redemtion for playing the role, nor does he get any respect from the movie going audience as a mad scientist, but instead plays out as a winy lame duck who spends more time playing dress up than actually being the ultimate bad ass supervillain.

Final Say: The Spirit was a big disappointment for me, I wanted this film to be so much more than it was, than again what I was asking for, was for it to be at lease fairly enjoyable, but that of course was asking too much, this disaster has in fact put somewhat of a damper on my feelings towards Frank Miller and his ability to re-create the successes of his film “Sin City” with its future sequels in the works. Oh well only time will tell and I’ll hold back my judgment until then, however this film is not worth the purchase, save your money and rent it if you must see it.
Copyright 2009 TCWreviews.com
All Rights Reserved
Posted by Clifford Kiyabu at 5:36 AM