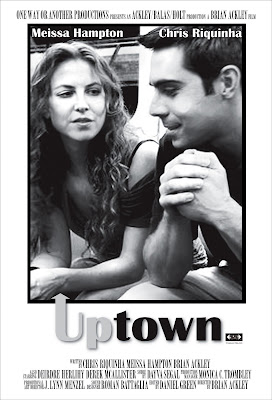 Plot: Two wounded hearts; one lonely, one lost, come together in the uptown side of the big apple to find that something missing inside them only to fine more than either expected.

My Thoughts: Love is a tricky thing, it can make you do some crazy and unbelievable things, things you never would think of doing that would even question your very morals. But we do them anyway because we are blinded by love, and when it comes to doing it all for in the name of what lies within our hearts we will gladly walk off a cliff for it.

Uptown is the debu

t film of actor/director Brian Ackley and is the second installment in the One Way or Another Productions “Naked Series”. Ackley is an actor who also co-starred in another film I reviewed not so long ago called “Cookies & Cream”, and now he has taken a step further and leaped into the director’s chare alongside director Princeton Holt to produce a film about finding new love in the big apple. Uptown is a titillating film about a guy name Ben (Chris Riquinha) and a girl name Isabel (Meissa Hampton), two people who met online as friends and decided to take their friendship a step further to meet and make it a night out on the town with their newfound friendship, it is only than that secrets about each other are shared back and forth. secrets that neither would have ever expected about the other, Isabel, who originally set out to be just friends reveals that she is newly married but has a lonely heart being married to her husband, but Ben, who is a lost soul in the game of love originally set out for finding something more than a friend in Isabel, but is shocked by this reviling bit of news by her, but decides to continue being friends with her regardless, through this though, exceed much more than that of a friendship between the two of them and begins to manifest itself into something much more, but is the risk worth the cost of their friendship or Isabel’s marriage?

in finding the right one will relate too on so many levels that; we as individuals feel what these characters are feeling, the wanting what you cannot have is undeniably heart wrenching, it reminded me of a quote I once read that said “A woman never forgets the men she could have had; a man, the women he couldn't.” I feel that to a degree all men can relate to this quote as do the main character, Ben, who is falling so deeply in love for Isabel, but knowing that he cannot have her because she is unavailable only fuels the need for her to replace the emptiness in his heart. The film projects a great deal of promise for Brian Ackley as a filmmaker, he manages to capture the essence of the out of synch emotions we feel when we want someone so badly, and though it has a few flaws here and there that I honestly feel if worked on could make this film truly an incredible slice of satisfaction. It does however still make up for itself with gorgeous cinematography work that makes you feel like you’re right there in the film, the score was outstanding, it really carries a set of emotion of its own onto film that works well, but the most impressive part of this film would have to be the ending. Because it doesn’t try to sell you short on a predictable ending most films in its genre receives, instead it gives you an ending that is more fitting to reality than anything else, nor does it try to sell you a new method on how to live your life or a message from some brilliant anecdote, no sir, it’s only moral to the story is simply showing you the realism of life in the real world with real people in it, and, even if you don’t agree with the outcome, life goes on and you must take a deep breath and just deal with it. I must say though that with time Ackley could become a name many will come to know by one day. Like all new filmmakers out there whom I’ve had the pleasure of seeing their works, I’m honored to have enjoyed the experience that was Uptown and look forward to Ackley’s next project.

The story is about: Ben has been single for a long time. For his part, he is a loner but as well a romantic: he enjoys the solitude of his simple being but appreciates intelligent and witty company just the same. By yielding to both extremes, Ben remains caught between reason and arousal. Isabel has been married for a year. The passion that had once carried her 5-year relationship has lost its pulse. Passive, protective, and without poise, it now threatens to claim hers. Waiting in abeyance, Isabel is lost between loyalty and loneliness. Uptown is where they come together.

As for the actin

g: all the actors give it their best in Uptown, Chris Riquinha does a great job in the role of Ben, he gives the character a strong sense of realism that is both provocative and impressive. Meissa Hampton was wonderful in the role of Isabel; she gave the character a unique style that was very enjoyable, I feel the raw tension between her and Chris Riquinha characters, plus I enjoyed how she played the character off as naive and sometimes bashful, every time their characters would hug or got really close I would be at the egad of my seat ready to yelling out “kiss each other already!” [Laughs], and believe me when I say; if two actors can get me that wild up than it’s something I really enjoyed because actors and filmmakers who can make the viewers feel that involved in a film is a rare talented indeed, it’s a special kind of talent that doesn’t come by every day. Derek M. McAllister does a nice job portraying Kasheem, Ben’s good buddy, I enjoyed the scene’s was in and only wished he was in more of the film. Deirdre Herlihy did a fairly good job, I liked her style of acting, would be nice to see more of her in more films in the near future. Overall the cast was great, I really enjoyed their acting skills that were projected on screen and showed they have a very decent set of on screen chemistry which was nice to see, far too often do we see good actors with bad on screen chemistry which proves to be tiresome to see as well as ruining the film overall, but this is not the case with the cast of Uptown.

Final Say: I had a great time with Uptown, and despite some minor problems I had with, none of which will stop me from seeing it again someday. I recommend it!

Copyright 2009 TCWreviews.com
All Rights Reserved
On a side note; the film is currently running on the festival circuit. But you can however purchase the “Naked” release festival version of the DVD by clicking here
Posted by Clifford Kiyabu at 5:05 AM