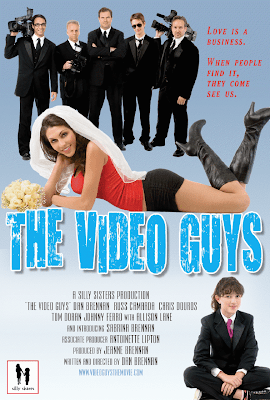 Plot: The Video Guys is a comedy about the wedding business and all the crazy things that happen.

My Thoughts: Every girl dreams of their fantasy wedding, where they eternally become one with their prince charming and lives happily ever after. But what do you do when things go badly on this special eventful day, and every possible bad scenario suddenly becomes a reality? Who are you going to call in such a crisis? There is only one group to call.

e Dan Brennan’s character (Paul) “If you want to know what love looks like, go to a wedding. You see it in the flowers, the vows, the smiles, and the kisses. Everyone sees it. Everyone except the bride and groom. To them it’s a whirl wind blur of hugs and handshakes. They need to see it. Someone needs to show it to them. That’s what we do. We’re the video guys”, that is exactly what the viewer will get with The Video Guys, a comedy about the wedding business and all the crazy things that happen in it, it’s about a group wedding camera men who chronicles your wedding day from start to finish for the bride and groom and if should a problem of any sort arise they will be the first to deal with it or else they don’t get paid. The films’ main plot deals with Paul “Dan Brennan” the co-leader of the video guys, he has the ability to see if a couple is truly in love or not and if their marriage will stand the test of time, however despite this uncanny ability he has which is never wrong, he was unsuccessful in maintaining his own marriage with his wife Elizabeth (Allison Lane), now he spends his time making other people live happily ever after than trying to repair his own life, but when his darling Ex shows up to tell him that she’s getting married suddenly the old sparks start to fly once more between them, but question is will Paul and Elizabeth be able to realize that they’re made for each other before it’s too late?

The Video Guys was a very enjoyable film, it captures a wide range of things that occur at a

wedding, from the typical problems that most weddings usually encounter as well as the not so common unfortunate ones, they will see to it that you will have a perfect day no matter the cost, but what makes this film so darn enjoyable is the fact that with every problem the plot presents to the viewers with, lies a solution that proves to be humorous, thoughtful and touching, this film is fantastically gratifying, and an all around feel good film. But what makes this film truly a worth watching movie is that for an in dependent film it carries an atmospheric style that is able to rival some of Hollywood’s big budget competitors in the same genre with are you ready? An original story that isn’t a carbine copy of another film… I know it’s hard to believe that such a thing is possible in today’s films but it is, Dan Brennan who aside from starring in this gem of a film is also the mastermind behind directing it, which believe me is always a great thing to see, because directors who star in their own films tend to make movies with outstanding performances, why is that you might ask? Because they know what they want and what better person to do the job right than the one who knows exactly what he wants. The film is flawed, true, but every faulty and unsound part of this film oddly does not hurt this film at all, but rather gives it a strange sense of presence that many can relate to in some degree or another. I personally enjoyed this film a great deal and didn’t want it to end, The Video Guys was very entertaining, I honestly didn’t think I’d enjoy myself as much as I did going into this but was glad to be wrong, overall this is a worth watching film.

The story is about: Love is hard to find but it’s easy to videotape. Paul McNamara and his video guys have shot over 2500 weddings. Every type of crazy bride and wacky groom. They manage the wedding day and keep the in-laws from killing each other. Now Paul must face his greatest challenge to date: his ex-wife’s wedding. 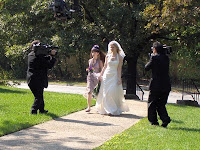 r the acting: Dan Brennan leads an ensemble cast of outstanding that works extremely well together. Brennan give a fantastic performance as the lead, he gives this film the driving force that makes the chemistry between the cast work, and work well it does. Russ Camarda does an fantastic job, he give a stellar performance as the group’s ladies man, Rick, who is without a doubt the member of their gang that makes them cool, and actor Camarda does this extremely well in the part. Actor Johnny Ferro, who plays, Chuck the newest member of the video guys, does a great job in the part, like all other members of the group his character (as well as an actor to the film) has a uniqueness about’em that makes them all function well together. And of course Allison Lane, who plays the leading lady of this film does exceptionally well, she gave the film that touch of Sexy meets classy to the film that works so perfectly, I’m surprised I have not heard of her sooner. Sabrina Brennan does incredible job as the character Miss Pinky, now I’m not one to give praise to child actors because frankly I don’t think most child actors can perform in the same league as the adults, however I must say that Sabrina Brennan gave a very decent performance that has earned kudos from me. I could go on and on about every member of this film but I would probably tire myself out from typing [Laughs], so know that I speak from the heart in my reviews and give only my truest most sincere opining, so when I say that; as a whole the entire cast does an extremely good job I mean it, I enjoyed the hard work these individuals put in to making this film as entertaining for me as well as for those who see it. I commend them with nothing but high praises for this lovely piece of Indy cinema.

Final Say: The Video Guys was a fantastic film that was truly a pleasure for me, I honestly could not stop laughing at the hilarious scenarios presented in the film, I also was touched by the story itself which was full of heartwarming moments that is well worth checking out. I highly recommend it!
Copyright 2009 TCWreviews.com
All Rights Reserved
Posted by Clifford Kiyabu at 12:08 AM