2000 was certainly a year to remember; the majority of Americans were still obsessing over the fact the Y2K panic was simply a scare and nothing more, and many were kicking themselves in the behind for wasting so much money stocking up on supplies. We weren’t as knee deep in national or worldwide debt as we are now. Unemployment was down and our economy was up! Yes folks it certainly were better times with hopes and dreams for a bright and shining future ahead of us.

But what made 2000 truly a good year was the release of what would become some of the most memorable films of the new decade, including Writer/Director Troy Duffy’s masterpiece; The Boondock Saints. What many didn’t know at the time was that this little known film was to going to become a must see film for movie buffs of the new generation and as well of the coming decade.

With such a limited theatrical release and the lack of a major internet community to spread the word around, this film had very little going for it… and yet, it managed to gather a massive worldwide cult following that continues to grow even ’til this day! Now, 10 long years and a sequel later, The Boondock Saints is finally receiving the proper treatment it should have had with it’s 10th Anniversary Event. 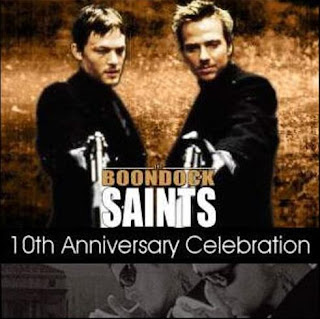 Centennial, Colo. – February 8, 2010 – Ten years after emerging as a cult sensation, “The Boondock Saints” will return to the big screen in a special one-night presentation, The Boondock Saints 10th Anniversary Event, on Thursday, March 11th at 7:30 p.m. local time. Creator, writer and director Troy Duffy will introduce the event and share rare behind-the-scenes experiences and footage as well as exclusive interviews with cast and crew members including Norman Reedus (Murphy MacManus) and Sean Patrick Flanery (Connor MacManus), captured especially for this anniversary celebration. Audiences will also be treated to special performance clips by The Dirges, Ty Stone and Taylor Duffy whose music is part of the upcoming soundtrack to The Boondock Saints II: All Saints Day, along with a sneak peek into the mobile games, comic books and graphic novel currently in development.

Presented by NCM Fathom, The Boondock Saints, LLC, and Hot Topic, tickets for The Boondock Saints 10th Anniversary Event are available at http://www.fathomevents.com/ and presenting theater box offices. For a complete list of theater locations and prices, please visit the web site (theaters and participants are subject to change).

“Twenty-ten is already shaping up to be an amazing milestone year for The Boondock Saints and for the millions of fans who have literally carried us to where we are today,” said Duffy. “I know I speak for Sean and Norman as well when I say that it’s going to be a year-long celebration of our connecting with, thanking and entertaining as many fans as possible just for the pure thrill of it all…and it starts on March 11th.”

Initially released in 2000 as a limited engagement to theaters following the Columbine tragedy, “The Boondock Saints” has gained a tremendous cult following, selling more than seven million DVDs to date. Acclaimed by critics and fans alike, “The Boondock Saints” is a story about fraternal twin brothers Connor & Murphy McManus who embark upon a mission to rid Boston of human evil. After killing two members of the Russian mafia in self-defense, these hard-drinking brothers take the law into their own hands. No public outcry is heard and even FBI agent Paul Smecker begins to feel that the brothers are doing a good deed.

“The Boondock Saints” was previously presented by NCM Fathom in 2006 in 130 select theaters.

“’The Boondock Saints’ special event was a hit four years ago as thousands of fans experienced this cult classic in their local movie theaters,” said Dan Diamond, vice president of NCM Fathom. “For those who have only seen this crime thriller on the small screen, this is a unique opportunity to experience it on the big screen like never before with an exclusive retrospective from Troy and the cast members who are part of ‘The Boondock Saints’ decade-long journey.”