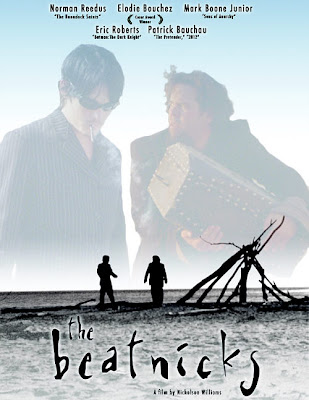 Plot: The BeatNicks are poet Nick Nero (Norman Reedus) and musician Nick Beat (Mark Boone Jr.), a pair of misfits with bad fortune looking for a gig. Their luck begins to change when they find a box on the beach, a treasure chest of infinite beats that will set the stage for the ultimate success, a gig at the Monkey Club. But when Nick Nero falls in love with Nica (Elodie Bouchez), the club's owner, Mack Drake's (Eric Roberts) captive bride, he learns there are some truths better left unsought. Hard knocks and a trip to rock bottom reunite the Nicks to perform the gig of a lifetime, and return the box to its source.

The Story is about: Nick Nero (Mark Boone Junior) and Nick Beat (Norman Reedus) two best friends down on their luck stumble across a mysterious box that maybe the answer to all their

My Thoughts: I‘ve always had a deep respect for poets, because there’s an unspeakable beauty behind the words of poetry. It matter not how poetry is made, may it be written on a piece of paper or verbally spoken, poetry is transgender, it is color blind, and it holds no prejudice towards faith. Poetry tells a tale of it’s own which can undeniably describe pain, pleasure, fear, anger, empathy, and love. No matter how you want to put it, poetry is like food for the soul.

is a remake of a 1996 thirty minute short-film by the same name and directed by the same director, Nicholson Williams. The film is an interesting leap into the world of poetry and with mystery. the movie follows two helpless buddies, Nick Nero (Norman Reedus) and Nick Beat (Mark Boone Junior) two life long companions who’ve formed their own two man poetry ensemble, while Nick Beat is the musician, Nick Nero is the talent with skills to pull random yet remarkable poetic rimes out of thin air, despite their talent it seems they can’t catch a break with their act and is quickly heading towards rock bottom if they aren‘t quick to make some cash soon. While I found the movie to be somewhat interesting, the film in general was (in my opinion) a hit and miss. The Beatnicks presented a mind boggling concept that manage to capture it’s viewer into it's world of poetry, and just enough mystery (The Mysterious Box) to keep you there wondering where they were going to take this film, but than the problems began to arise. For a film that was made just around ten years or so ago the film looks as though it was made in the early 80‘s, the audio and visual effects have disappointedly not aged well. As the film goes on the movie’s plot hits a pretty big fork in the road (or turnpike to better phrase it) very early on into the film, and becomes quite messy, so to speak. Now don’t get me wrong, I love a good multi-layered film as much as the next movie buff, because after all, a multi-plotted based story only enrich the film overall if done right. Unfortunately I found this film a bit disappointing in the sense that it presents an interesting plot and subplot but doesn’t quite reach that point where it’ll give full closure or satisfaction to the audience.

Now don’t get me wrong, The Beatnicks was not all bad. It did in fact have it’s redeemi

ng qualities for what it was worth, for instance seeing actor Norman Reedus recite poetry with such dedication in his performance was really something to see. Another attribute this film had was the weird yet sometime comedic storyline which presented an oddball sense of wisdom within itself that I found most entertaining. The film’s romantic subplot, which I thought had the chance to really develop into something that was going somewhere with it’s set up (Nick Nero falling for Nica) ended up hitting an unfortunately Dead-end which was very disappointing, because the romantic aspect of the film really gave it a decent enough foundation to keep the film grounded and centered, I disliked the fact the romantic subplot fell apart faster than it did coming together, however there is still but one part of that subplot that I feel was a purely redeeming moment for the film, and that’s a scene that takes place on a beach towards the ending, I won’t give much of the details away as to prevent any spoilers, but know that I found it to be romantically touching. Even though I’ve said some very negative thing about this film, I still urge those who express a deep desire to see this film to rent it, if not for anything but to at least check it out once.

As for the acting: The a

cting is fairly decent, though I admit there was a lot of room for improvement here that was overlooked, but still it was pretty okay. Norman Reedus was fantastic to say the least in the lead role of Nick Nero, he stuck strongly true to his performance throughout. Anyone who’s a Reedus fan will want to see this film if for anything, his performance above all. Mark Boone Junior did a fine job in the role of Nick Beat, his character kept the film’s plot out of the norm mostly throughout. his great performance derives really from the fact he’s been playing ‘That Guy’ in movies for years, you know what I’m talking about, the guy who’s always in the supporting role and never the lead, while some might see that as demeaning I on the other hand praise him for it because it‘s kept him humbled as an actor. Élodie Bouchez was lacking in my opinion, she came off rather dull and an extremely two-dimensional in her delivery, I really wanted to believe in her performance because she seems like a sweet person who has a lot of potential, but at the end of the day you really have to step back and judge what you see truthfully to how it played out. Patrick Bauchau gave a fine performance that really stood out for me, because he was like the hippy wise man in the film that has all the answers but none to offer (If that makes any sense at all [Laughs]), it was certainly not in the norm if you ask me. Jon Gries did a fantastic job, I found his character to be one of the most entertainingly in the film, however it was sad to see he had such a short screen time. Eric Roberts is in my opinion, one of the most unappreciated actors to date, the man has starred in a slew of films and shows throughout a number of decades, and yet he isn’t giving as much props for it as his sister has. However the man makes bad look so good and he does so by playing the role of the film’s villain (if can really call him that, that is) his role in the film was somewhat disappointing though because it had the potential to develop into something great and ended up being sub-par.

Final Say: After sitting back and looking at the grand scheme of things I found The Beatnicks to be the type of film that was released after it’s prime, and would have had more success with a movie going audience if it had been realest during it’s original release date. Though the film had many faults to it I found it to be interesting in that artsy kind of way, and though I wouldn’t recommend holding my breath for buying this film I would recommend renting it at least once for the sake of curiosity.

Copyright 2010 TCWreviews.com
All Rights Reserved
Posted by Clifford Kiyabu at 7:12 AM