New Character List Revealed For Up Coming Season of Dexter! 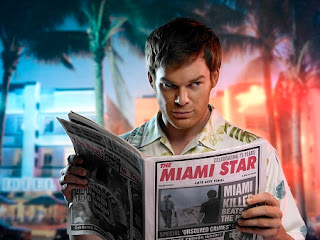 From the moment I watched the very first episode of Showtime’s “Dexter” I was hooked by the twisted sense of humor it projected in each and every homicidal episode. There’s just something about a psychotic Miami forensic scientist that moonlights as a serial killer vigilante who brings blood and justice to the scum of the earth. And what further complements this dynamic force of nature even more is the added ingredient of talent by none of then actor Michael C. Hall.

With that being said, how many of you was left wanting more at the end of last season of Dexter? Well the wait is almost over as production for the sixth season of Dexter is underway to begin at the ending of the month and TVLine has acquired some interesting info regarding the line up of new characters coming on the upcoming season. Be aware you’ve been warned… SPOILERS!

Jamie: Described as an outgoing and fun Latina in her mid-20s, this Florida native relocates to Miami for grad school.

Louis: A buddy of Masuka’s (C.S. Lee) who joins MMP as a new lab intern. Role calls for a Caucasian actor in his 30s who is “attractive in his own way.”

The usual season regulars are expected to make their return on the upcoming season of Dexter which comes after the post announcement when it was announced that Hall was battling Hodgkin's lymphoma and his wife, Dexter co-star Jennifer Carpenter, had filed for divorce late last year. Dexter is expected to air on Showtime this fall.

Side Note: So do you think Hall and Carpenter will be able to continue working together on the show without a hitch or will there be a noticeable show of tension between the two?
Posted by Clifford Kiyabu at 6:53 AM