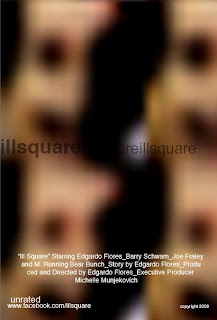 Plot: An ill depressed man in search of love, a neurotic old git and a lonely documenter converge in this offbeat, experimental musical.

The Story is about: Three tales converge in this mind warping directorial debut by Edgardo Flores. A love sick man (Edgardo Flores) sits at home broken hearted and hopeless. After months of rebuilding his confidence, he sets out to find his one true love, but what he ends up with instead is something far more complex. Meanwhile, a neurotic old man (Barry Schwam) and his son (Joe Fraley) prepare for a zombie invasion, after an emergency broadcast sends them off. Armed with a pellet gun and a hand saw, this father son duo will stop at nothing to save the world.

My Thoughts: Originality is a hard thing to come by these days, especially in the film industry since it’s a rat race to the finish line for the next big idea. Filmmakers and writers pushing the envelop and taking things up a notch all the time, pushing the boundaries between what’s acceptable and what’s not. And most importantly, what’s never been done before. And every once in a while there will come a film unlike any another. And when that serendipitous moment arrives for a viewer, it’s always one they’ll soon not forget. 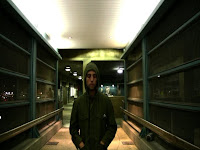 As I sat quietly in my chare viewing Writer and Director Edgardo Flores’ directorial debut “Ill Square” for the first time, one pivotal thought ran through my head as the film began to play out… Just what the heck is a “Ill Square” anyway!?!? Well the answer hit me like a solid brick to the face. Ill Square is a offbeat experimental musical on a very low micro budget of about $2000. Now I know that the idea of a overly ambitious filmmaker directing a low budget indie doesn’t quite go together seeing that it’s the perfect combination that equals for total disaster most of the time (More common then we‘d like I‘m afraid ), and lord knows how many times I’ve personally seen that unfortunate scenario play out in the past. But in this case it doesn’t quite end completely that way. Flores brings something very much different to the table then most wouldn’t be accustom to in a indie feature, to best describe what this cinematic experiment actually is would have to compare to something in line that Tim and Erick from “Tim and Eric Awesome Show, Great Job!” would proudly make had they gone into the feature making business, and with that being said the film works very well for being just that, an experimental piece of filmmaking which no doubt earns my respect for taking a leap into the unknown for this type of genre let alone going into making something as ambitious as this with no sureness or guarantee of an outcome, and only being armed with a loyal cast and a skeleton budget, I tip my hat off to Flores for doing this. The story basically follows a handful of different individuals who’s plots take much different courses of action in terms of theme, one being of a man who’s brokenhearted and hopeless to the love he has for the woman who broke his heart, and after finally building up the confidence to win her back he discovers a shocking revelation. The story proves to be interesting to say the lease, but unfortunately fails to maintain a strong grasp over my attention long enough to keep a hold on me at times mostly due in part that the first story felt overly bland, making it somewhat bitter. 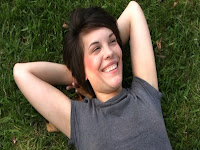 The second story follows a lone documenter who quietly ventures around the city and transit stops filming random people, though this story has no particular plot it does serve the film with some lovely shots of random locations as well as a few interesting people along the way that proves to be quite interesting that a artsy crowd might appreciate. And if you don’t appreciate it then it will also serve the viewer as the perfect intermission point before the next plot driven story starts back up. Now with that said, the third story follows an old man and his son who has purposely trapped themselves in someone’s empty house in the middle of the night after hearing an emergency broadcast over the car radio claiming of a zombie invasion (which if you‘ve been following the previous plot lines then it's most likely a radio prank gone wrong) armed with only a pellet gun and a handsaw the father/son duo prepares for a zombie apocalypse. In all honesty the third story is actually where the film becomes extremely entertaining as it serves up both comedy and horror to the viewers in a very pleasing way. Sadly, because the film bounces back and forth between storylines it leaves you waiting to see the father/son due back in action on your screen rather then the other interconnecting storylines. Now with that said the other flaw I found was that the film prides itself on the music numbers in the film's description, yet much of the music doesn't quite hold up to be the slightest bit memorable and comes off as easily forgettable, which is not the fault of songs themselves but rather it just doesn't fit in with it all to well. But the film’s biggest problem seems to stem from a lack of proper story pacing that would connect these stories together in a more understanding manner and because these stories are very different in terms of theme, it makes it incredibly difficult at times to keep up with the pacing making you wishing the film would just settle with watching the quirky father/son due for the duration of the film rather then anything else, which is not an attack on the other plots in the film or the filmmaker, but rather pointing out the flaws in a constructive manner, because Ill Square is in itself an interesting piece of indie work made out of next to no budget and little film tech at it’s disposal, and I have no doubt in my mind that it’ll gain a cult following with time. My only wish is that Flores will see these flaws presented here and ratify them in his future endeavors. 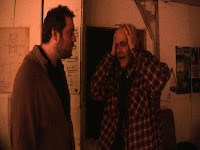 As for the acting: Well the cast did a fairly okay job here, though the real eye catcher is no doubt Barry Schwam, he brings a truly captivating persona to the table that has a life of it’s own, and at times it proves to be an overwhelmingly compelling personality that is extremely hard to ignore then alone dislike. Joe Fraley’s performance only further complements Schwam’s performance with his Simple Simon attitude towards everything, especially everything being told to him by Schwam’s character. Edgardo Flores, who not only wrote and directed the film, but also starred in it, did a pretty good job in his performance, though I really did wish there was more life and emotion put into his character, because the biggest flaw to Flores’ character is that it lacked the emotion one would have had they just gotten their hopes knocked to the curb with a curve ball. As of the rest of the cast, they all did pretty decent in the film, however, because of the third storyline taking the biggest interest here, it’s hard to really follow the performances of the rest of the ensemble cast with a earnest opinion of those actor’s not directly involved in that particular plot.

Final Say: although Ill Square was not the slam dunk I would have liked, it was still very much interesting jumping into, and despite my not recommending it or giving it a somewhat low rating, Edgardo Flores is a filmmaker who is now on my radar as one to lookout for in the near future, and I very much look forward to seeing him prefect his craft.


Copyright 2011 TCWreviews.com
All Rights Reserved
Posted by Clifford Kiyabu at 6:23 AM