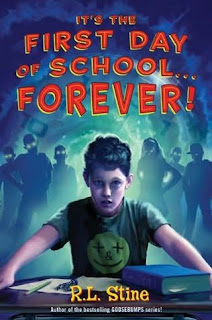 Being a child growing up in the 90’s there was one author that stood so vividly out for me, R.L. Stine. From his “Goosebumps” books, to the TV show, there was just something about his writing that naturally gave me the willies, and this is coming from a guy who watched A Nightmare on Elm Street as a bedtime movie! Maybe it was his storytelling that appealed to the child that I was at the time, but some of the stuff he created scared me more then anything some of the big wig horror icons to come up with, one memory that easily comes to mind is seeing the cover art to his novel Night of the Living Dummy and watching the Goosebumps episode “The Haunted Mask” (which is one of my favorite episode by the way) creeped me the heck out!
But with that being said, R.L. Stine is the master mind responsible for scarring the bejesus out of an entire generation of youngsters, and it looks like one of his works will be finally getting a theatrical treatment. The Hollywood Reporter is reporting that one of Stine’s latest books "It's the First Day of School...Forever!" has been optioned by the Gotham Group for the silver screen.
The story will follow "12-year-old Artie, whose second day at his new school is exactly like his first, which just happened to be the worst day of his life. The boy finds himself reliving the same horrible day and must find a way to change his nightmare." The book is expected to hit book shelves sometime in July. Meanwhile The Gotham Group commented of what they in vision the live action adaptation will be like "a thoroughly reimagined Diary of a Wimpy Kid meets Groundhog Day," also saying it combines the elements that have made Stine a household name among the kid-lit set, namely horror and humor." at the moment no writer is currently attached to write a script, but it is expected that a writer/s will be attached in due time.

Side Note: So what say you, are you down for a R.L. Stine movie hitting the cinema?
Posted by Clifford Kiyabu at 1:14 PM