THE BOONDOCK SAINTS’ GRAPHIC NOVEL TO LAUNCH ON NOV. 21ST WITH A SIGNING EVENT AT LOS ANGELES BARNES & NOBLE

There’s a lot to be thankful for these days, especially if you’re a fan of the “Boondock Saints” films. It seems like there isn’t a month that goes by these days that word comes out from the Duffy camp regarding Boondock Saints goodness. And to think there was a time where there was little to nothing regarding the series. But if that’s not enough, there will be an entirely new reason to be thankful this holiday season especially if you live in the Los Angeles area. On Monday, November 21st. Troy Duffy and his skilled comic team will be making a special appearance at the Barnes & Noble in Los Angeles for a book signing and also giving away special goodies to the first 200 people who show up and an additional special goodie to only the first 100 people who arrive there first! Now before you drop what you’re doing to secure a place in line, I must stress that you first read the details below before making any hasty decisions. So read on fellow movie buffs! 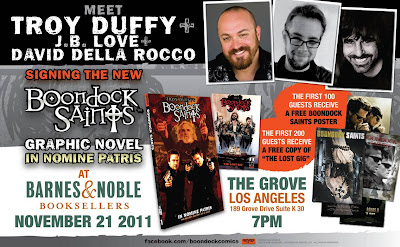 TROY DUFFY and J.B. LOVE - the writers behind The BOONDOCK SAINTS' initial foray into comics will be signing the collected GRAPHIC NOVEL edition at BARNES & NOBLE in LOS ANGELES and they’re bringing DAVID DELLA ROCCO as well!


TROY DUFFY’s original BOONDOCK SAINTS film is one of the most successful independent movies of all time, with a fiercely devoted fan base - with nearly 5 million online followers of the franchise. With the hit comic series "IN NOMINE PATRIS", creator/writer/director TROY DUFFY launched the first "Saints" story to take place outside the iconic films. Written by Duffy and comic scribe J.B. LOVE, the comic series is the perfect companion to the films.


The story masterfully interweaves the events of the BOONDOCK SAINTS II: ALL SAINTS DAY with brand new material to reveal the secret history of the original saint, NOAH MACMANUS (IL DUCE) as he wages a bloody war against 1960's New York's Underground Crime world. The storyline is intercut with brand new adventures of the BROTHERS MACMANUS (The Boondock Saints) doing what they do best; doling out their special brand of justice to those that deserve it. "In Nomine Patris" brings a new chapter of the Saints saga to life while revealing the family legacy that created this trio of "Shepherds".


Featuring a forward by Connor MacManus himself - actor, SEAN PATRICK FLANERY - Join Troy Duffy and his comics team in this thrilling new Saints Adventure by pre-ordering the collected edition. This special trade paperback collects all six comic issues, never before seen art, a cover gallery, behind the scenes sketches and more. This is the collection the fans have been waiting for!


BARNES & NOBLE will HOST the first signing of the Graphic Novel before it’s available in stores! The FIRST 200 Guests will Receive a FREE COPY of the Exclusive Comic, “THE LOST GIG” starring fan favorite, ROCCO. The FIRST 100 GUESTS will also receive a FREE BOONDOCK SAINTS POSTER.


Side Tidbit: I wonder if someone will be lucky enough to get him to commit to making a 3rd Boondock Saints film within the next 3 to 5 years. If someone does they’ll no doubt earn The Critic’s Word’s undying respect! [Laughs]
Posted by Clifford Kiyabu at 2:28 PM