Review: What They Say (2011) [Reviewed By Clifford Kiyabu] 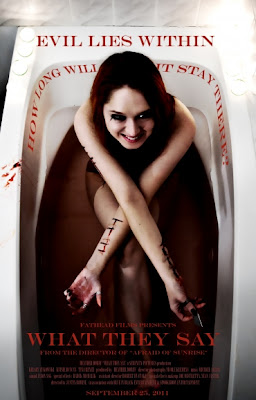 Plot: They thought she had the perfect life; wealthy and privileged, an honor student with her whole life mapped out. What they didn’t know was what lied inside of her; pain and anguish; tearing at her until there was nothing left. Lost and alone, the young women (Heather Dorff), finds solace in the form of a glistening blade, splitting her skin deeply. Her self-indulgent mother and obnoxious sister (Kelsey Zukowski) are completely oblivious to her inner-turmoil. She has long since become numb to the world around her, getting that sensual release, as the razor cuts deeper, watching the blood drip, is all that matters. As soon as the last drop falls, the calm is stripped away from her with it. How far will she go to silence the hunger that now consumes her? Will she be able to regain control of her life, body, and sanity?


My Thoughts: Over the course of 2011, I’ve covered the Fathead Films project “What They Say” in multiple articles throughout the spring and summer, though much of the plot has always remained vague to you, the reader and I, there was always a sense of what’s to be expected from a film such as this. From the eerie tone the movie stills displayed, to the darkly themed synapses, everything regarding this project including the gory details shown in its teaser trailer called out a darkness that was equally compelling as was seriously disturbing. But to speak completely frank here, there was no way of preparing me for what was to come next when I actually screened WTS. To try and describe what I had seen during the screening without giving away any specific details or spoilers for that matter, would be calling it twistedly delighted. Its gory visuals are bloodstained yet oddly beautiful, setting an atmospheric narrative that captivates you in a cloud of physical and emotional pain. The film’s plot is indeed astonishingly unsettling and yet weirdly enough calming with beauty.


Within the first few minutes of viewing the film it becomes perfectly clear that WTS’s plot is deeply personal from the heart and mind of the writer, the story carried such a level of remarkable storytelling that it felt rich with raw emotion, that its essence was captured from a dark place in their life. Or at least that’s what I got out of the experience itself. That’s another thing I found so compelling and deeply fascinating with “What They Say”, is that it’s hardly something that one can summed up in words. Like an emotion, it must be felt and experienced firsthand to get a full detailed understanding of the experience itself and to fully comprehend its message. Some will argue that WTS is a horror with dramatic themes, while others will say it’s a dark drama themed with horror elements. I however, would classify it as neither. The way I saw WTS play out, or at least in my opinion, was more in line of a character study into the human soul and the darkness that dwells within. A dark passenger if you will, that lurks within us all. For many that darkness is always kept at bay never seeing the light of day, but for some that darkness is always just beneath the suffice trying to scratch and claw its way out. The question this film left me thinking with by the time it was over was; what happens when that darkness suffices?


As for the acting: the acting here is quite impressive. Heather Dorff delivered an outstanding performance in the lead. Her delivery is so well done and on mark that it felt less like a role and more like the character was living through her; the way she handled herself was dignifying and graceful to say the least. Her performance expands beyond the role itself, but rather on a deeper level that brings a certain aspect to the role that one could argue was as intimately personal to a role that any actor playing a character could get. Kelsey Zukowski gave a stellar performance as a co-star alongside MS. Dorff, showing a remarkable performance for someone still fairly new to the acting scene. Aside from her astonishing writing as a screen writer and columnist, Kelsey displayed another talent to add to her résumé with acting, making her the ultimate scream queen to look out for in the near future. Tina Renée Grace also did a fine job in her performance. Though my first encounter with her work as an actress was just earlier this year with the indie short “Love is Not Enough” I ‘m very impressed with her thus far and would even consider her as one to watch!


Final Say: What They Say managed to live up the hype and so much more, in my opinion. If there’s anything I take away from watching this film, it’s that it will take you on a personal journey to the edge of insanity and show you that it’s only through the darkness that we see truth. If there’s any indie short to see this year, What They Say is it! I highly recommend it!