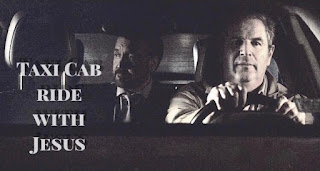 Review: Imagine if you had a chance to talk to Jesus Christ for 20 minutes. What would you even say in a situation like that? More importantly, would you even believe him? In my honest opinion there is no correct answer to this question because even the most faithful would likely question the legitimacy of a total stranger claiming to be the son of god.

But I digress, from director Dan Brennan, the creative mind behind The Video Guys (2008) and Maggie Marvel (2010) comes Silly Sisters’ latest production Taxicab Ride with Jesus (2020) a short film about Billy (Dan Brennan) a down on his luck cab driver who’s going through a rough time having to balance a growing mountain of bills and medical debt, his wife Clare (Marybeth Paul) stressed and worried, and their daughter Wendy (Juliana Sousa) hospitalized in a coma, and who’s health is rapidly declining. Billy’s latest fare, however, happens to be Jesus Christ (Russ Camarda). Yup, THAT Jesus.

TRWJ is a heartfelt short that teaches one to find the inner courage and faith to take responsibility in life, even in the bleakest of times. Seeing Dan Brennan and Russ Camadra together on screen is always a treat to behold. While both actors are without question fantastic performers on their own, it’s whenever this dual share the screen together that, in my opinion, is when the real magic happens. Dan’s performance as Billy comes off as sympathetic and relating. He delivers an accurate representation of the every day man fighting through the day to day struggles of life. Russ’s take on Jesus is both fresh and to be frank, quite enjoyable. This isn’t the overly praise the lord churchy Jesus. This is a variation who quietly observed humanity in all their flawed ways for the past 2000 years, and quite frankly, have grown somewhat annoyed to see how little we have learned from past mistakes. This iteration of Christ might be viewed as a little controversial to some, sure, but I personally found it to be a welcoming breath of fresh air. Ed Cryer as God was perfection, absolutely perfection! With a cast like this I wouldn’t expect anyone else in the role of the all mighty! I also enjoyed Marybeth Paul performance as Clare, and Juliana Sousa as Wendy. Both did exceptionally well in their respective roles.

Final Verdict: I really enjoyed TRWJ. It’s well shot and well paced with suburb editing done by Russ Camadra himself. I really loved the Taxicab Confessions vibe the film gives off during Billy and Jesus’s conversation. It’s blunt and comes across in a no-bullshit attitude, but also doesn’t come off as too preachy. I also really appreciated the piano score, which in my opinion, added that extra special touch. My only complaint is that, I really wished it were just a tad bit longer than 20 minutes. All in all, TRWJ is a worth watching short, especially now more than ever with content being somewhat limited in availability.