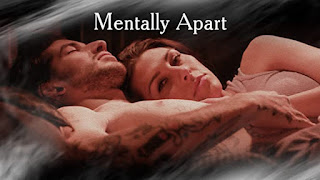 Review: Mentally Apart is definitely not your every day run of the mill horror movie. It is deep, thought provoking horror full of symbolism and clues, many of which you are likely to miss on a first time viewing. But it is certainly worth multiple revisits. So what is it about? Well, the movie is about the relationship of beautiful couple, Luna (Christine James Walker) and Chuck (Larry Bernardo). As weeks pass into months in their apartment, bizarre things begin to manifest. And dark emotions begin to surface. What happens when the dream becomes a nightmare? And the perfect relationship sours..

I don’t want to divulge too much about the movie because it really boils down to something you must experience for yourself to get the full effect. But I will say that it likely won’t be for everyone. Some will no doubt love it, but by the same token there is going to be others who will likely hate it, or simply find it too bizarrely out there to really formulate an opinion. But that isn’t necessarily a bad thing. Because what that proves is that, Mentally Apart is a thought provoking film with a dash of psychological horror, that, while it might not be horror in a conventional manner, it definitely hits you where it counts. In short, it is a work of artistic brilliance!

In his feature debut, writer/director Joe Pomarico brought the goods with Mentally Apart. He captured the atmosphere and spiritual tone of something straight out of a Lars Von Trier film. It will be very interesting to see what his next feature will be. As for the acting. Christine James Walker was fantastic in the role as Luna. She has a very likable and charismatic personality which perfectly compliments her acting skill. There’s also a classic pinup look about her that fit the atmospheric dream like setting like a fine glove. And her on screen chemistry with Larry Bernardo really makes everything about the film work. I wasn’t too impressed with Larry Bernardo as Chuck at the start of the film. But, by the second act I was easily won over by his solid performance. As a duo, these two work incredibly well, and I hope to see them team up again.

Final Verdict: Mentally Apart is not for every horror fan. But regardless of whether or not you liked the film, you cannot deny the lasting impression it will leave on you. Does it have repeat value? In my Honest opinion, it certainly does.. because upon my second viewing I noticed a bunch little details that really added to the overall quality of the film that I hadn’t noticed in my previous viewing. And when a film manages to give you something new with each repeat viewing, that shows true cinematic quality. I highly recommend!