Review: Alvin and the Chipmunks (2007) [Reviewed By Clifford Kiyabu] 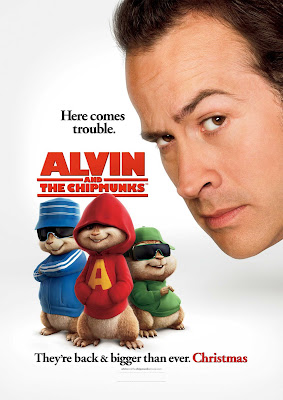 My Thoughts: Alvin and the Chipmunks – A group of fun loving critters that has been a household name since the 1958 Christmas classic; “Christmas Don’t Be Late.” With many singles and albums to follow throughout the 1960’s to the 1990’s, and a cartoon hitting TV networks in the late 60’s, with a revamp cartoon in the 80’s for a newer generation including a hit theatrical film called The Chipmunk Adventure (1987), but as the 90’s rolled in and the times began to change, so did their fan base due to the generation the show was revamped for had grown up, the cartoon began to die as well as the sales in the music, soon the show was canceled and they started to only release a new album every few years or so, with an occasional direct to Video/DVD movies which were very miner success, it was clear that the world had forgotten about our cute little friends and slowly by slowly they slipped away into a mere memory of the past. That is until in 2007 when they had been brought back to the spotlight, revamped and modernized for a brand new generation of viewers to appreciate their cute little voices, and of course to welcome back the older generation, which is a known fact is one of the main reasons why the movie was such a success at the Box-Office pulling in 356 + million worldwide for a budget of only 60 million, some could say it made a ridicules amount of money, and there is no doubt in my mind that a large amount of their audience was made up of the “baby-boomer” generation taking their children and grand children to see this film. Now let me tell you, I am a really big fan of Alvin and the Chipmunks, heck I grow up watching the re-runs of both shows as a child including the animated movie on VHS which I watched so many times that I literally ran the tape down [Laughs].

They after all were before my time, heck the animated movie itself came out in theaters only

one year after I was born. But that didn’t stop me from watching it, you could say I’ve always had this passion for old films (80’s classic films) and old music (from classical music to 80’s cool rock) because they have this certain quality that films today don’t have, it’s hard to explain really, it’s more of a feeling from appreciation of the classics, you know? So with that said I wasn’t too happy to hear about this being made into a live action film at first because after witnessing the catastrophe that was Scooby-Doo (2002) and its sequel which fallowed two years later Scooby Doo 2: Monsters Unleashed (2004), and if that wasn’t bad enough I was even more so disappointed with Garfield (2004) and Garfield: A Tail of Two Kitties (2006) which was so mind numbingly stupid I felt incredibly embarrass just watching it by myself which was on DVD of course (you couldn’t pay me to see it in theaters), so after having to endure these bad experiences with adaptations of classic cartoons turned live action film you can see why I had lost faith in the genre, so I avoided this film at all cost while it was in theaters because after all I felt it just wasn’t worth nether my time nor money.

So after giving it a chance, I must admit; it wasn’t at all bad, it was nothing that I expected i

t to be, I thought it was going to be as bad as the other films I mentioned above so naturally I had low expectations for the film, but instead I got something that was quite enjoyable and worth giving a chance on, if you are a fan of the genre or a downright Chipmunks fan. As I watched Alvin and the Chipmunks I was flooded with memories brought back to me, the very moment I heard Justin Long voicing as Alvin singing “Bad day” I was quickly overwhelmed with emotions from my childhood, something I honestly wasn’t expecting, as you know I grow up to these little critters singing and dancing around, not to mention the albums which I listen to like crazy, if you saw me listing to music at that time it was a good chance I was probably listing to one of the Chipmunks albums. Now there was a few things that had been changed for the very original concept, one of which was the fact they made Alvin, Simon and Theodore into life size chipmunks, unlike the cartoon and their original image which had always made them out as over grown chipmunks that where as big as small children, I normally wouldn’t like this sort of idea because anytime a film studio tampers with the original concept it never ends well, but this time it does, and does so in a very good way, also I liked how they introduce Alvin Simon, and Theodore into the plot, on their own like real wild animals and then finding themselves in the company of straggling song writer Dave Seville who together they form a unlikely family bond, and I must say the one chipmunk who was made 100% accrete was Theodore which I must point out if you like the chipmunks as much I do then; there is no way you are going to be able to make it through seeing little Theodore without tearing up a little, I know I did. Also I like the fine CGI work done on the little guys, although I will say there was one or two scenes where I thought it could have been worked on a little better, and also the fact there was one montage way too many (about 3) in the film’s second and third act which showed a bit of a weakness in the story, however it saves itself by backing up into full gear around the third act for a finishing wonderful fourth act.

The story is about; in a tree farm, three musically inclined chipmunks, Alvin, Simon and

Theodore, find their tree cut down and sent to Los Angeles. Once there, they meet the frustrated songwriter David Seville, they impress him with their singing talent. Seeing the opportunity for success, both human and chipmunks make a pact for them to sing his songs. While that ambition proves a frustrating struggle with the difficult trio, the dream does come true after all. However, that success presents its own trials as their unscrupulous record executive, Ian Hawke, plans to break up this family to exploit the boys. Can Dave and the Chipmunks discover what they really value amid the superficial glamour around them?

As for the acting: Jason Lee is a very talented actor whom I’ve come to enjoy watching over th 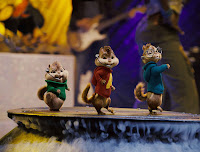 e years, however, playing the part of Dave Seville is not one of them, it’s not that he did a bad performance or anything, no far from it, it’s just he didn’t quite match the role, no matter how much I tried, I couldn’t see him as Dave, all I could see was the character from his TV show "My Name Is Earl” and believe me when I say I really tried!, however this little bump doesn’t kill the film, after all he isn’t exactly the film’s main attraction, so in a way it balances out. David Cross did a great job playing the villain of the story, though I tend to find him a little annoying at times, I have to say isn’t that the who point of being the villain in this story, so in this case I say; mission accomplish Mr. Cross! Cameron Richardson was a sweet heart in this, but I felt at times she was being sidetracked a little from being the love interest and just forgotten during the film. Justin Long, Matthew Gray Gubler, and Jesse McCartney were spot on as Alvin, Simon and Theodore, I really didn’t think the three had it in them to do the parts justice; however I was wrong and they did a great job, perhaps this is a sign that movies such as these can be made in a manner that will be loved, oh well here’s to hoping it’s sequel lives up to this one.

Finale Say: Alvin and the Chipmunks was an incredible film to watch, I really didn’t think I’d have this much fun watching it, but I did and I’m glad I did at that too. If you have children and at least free spirited enough to enjoy movies like this, then this is without a doubt for you and I recommend it!
Copyright 2008 TCWreviews.com
All Rights Reserved
Posted by Clifford Kiyabu at 2:02 AM