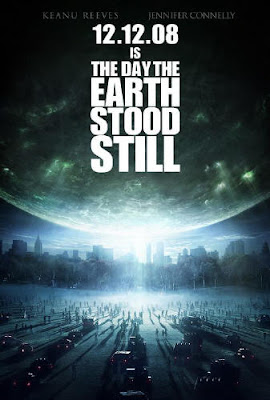 Plot: A remake of the 1951 classic sci-fi film about an alien visitor and his giant robot counterpart who visit Earth.

My Thoughts: American science fiction editor and writer Harry Bates wrote a short story called "Farewell to the Master" which later became the bases to the hit 1951 black and white film “The Day the Earth Stood Still”, which is known till this day by Sci-Fi fans as one of the groundbreaking films of its genre, much like the phenomena that was “The War of the Worlds” it was both entertaining and very terrifying, it was a coming of age cinematic sensation, and now after over 50 long years since its release a remake by the same name has finally arrived, but can this new millennium remake live up to the integrity might of the original? Well you’re about to find out.

The 2008 remake has style, flash, and a dazzling amount of special effects that is a spectacle

wonder, however, the film lacks a great deal of substance, where the 1951 original hit it big with a quality storytelling, this sad attempt of a remake fails on a hug scale, what was an amazingly fantastic plot has been modernized into a travesty of mind numbing action, the only thing that seems to remain the same is a small handful of scenes and elements which are pretty much re-done scene for scene, other than that the film feels as though the filmmakers as well as the studio only used the title so that they could cash in on the successes of the original, this film in its own theme is much like the remake of War of the Worlds, where everything that made the film great is replaced with obnoxiously bad product placement and, lousy dialogue that proves to be a serious nuisance, but that’s just the tip of the iceberg, the real problem lies within the plot of all things which I cannot stress enough was a great disappointment, the original’s plot was fantastic, which had the bases of terror embedded into its mysterious yet entertaining plot warning humanity of its ways and gives us the choice to abandon all forms of warfare and join the universe of peaceful alien races or suffer the consequences, this however was shot down in the remake with a more environmental approach, which proves to be a disappointing lackluster among other things, and to make things even more worse they even tried to add a few humorous moments into the film which proved to be more uncomfortable to watch than anything else, and some of the more serious moments (which felt more humorous than anything else) felt more like gap fillers for the films major action scenes which it’s basically just building up to and from, and when you think about it, this is not what sci-fi fans paid for, they paid for a film with style, excitement, mystery, and a rollercoaster rid of chills and thrills with a decent plot, but this unfortunately had none of that, but that just the beginning, please read on and see why the film WASN’T all that it could have been.

I’ll be blunt with you, this film started off very interesting and had me intrigued to cont

inue watching it, and for a brief moment it had the chance of being a really great film, but that was flushed down the toilet after about 30 minutes into the film, it felt more like a chore than a pleasure, I was beginning to look at my watch continuously throughout the performance counting down the time remaining wondering when the ending would be approaching, and let me tell you, for a film that was only an Hour and forty three minutes long it felt like three hours, most of the film was predictable to the point I was able to call it long before it happened and it seemed as though the cast phoned in their performances the whole way, and if things where bad, it gets even worse when the filmmakers decided to make gort godzilla size! which the very first thing to come to mind was are you kidding me? this is most definitely NOT! The day the earth stood still, but rather the day the earth stopped due to a lack of good story telling, one of the biggest problems I found would have to be the lack of fear among the characters in this film, let’s be honest here; who wouldn’t be terrified at the idea of an alien bean invading the planet with an armada of mini ships all over the world? The fact that people were divided between accepting the current the situation or just going about their normal lively routine only further proved my point that it was a very cheese film, I don’t know about all of you, but if the planet suddenly got invaded by a hug alien sphere fallowed by an army of mini spheres I’d be already heading for the hills! The only ones acting out aggressively and being in a state of fear was the military. The point I’m trying to make here is that; remakes have and always will be nothing compared to the original, revamps, remakes and re-imaginings are all the same to the extent that they are and always will be second string, and never be able to live up to the full potential, in short this is a prime example that not all films (especially classics), should be modernized, something’s are best left alone.

he Story is about; renowned scientist Dr. Helen Benson finds herself face to face with an alien called Klaatu, who travels across the universe to warn of an impending global crisis. When forces beyond Helen’s control treat the extraterrestrial as a hostile and deny his request to address the world’s leaders, she and her estranged stepson Jacob quickly discover the deadly ramifications of Klaatu’s claim that he is a friend to the Earth. Now Helen must find a way to convince the entity who was sent to destroy us that mankind is worth saving--but it may be too late. The process has begun.

As for the acting; the acting was poorly done, despite the incredible cast put together for thi

s film, I found myself in a real yawn-fest, I seriously thought that with a cast such as this the acting would at least be s sure thing for entertainment, but even that proved to be wrong; Keanu Reeves, who I’ve always enjoyed watching on the big screen turned out to be a real disappointment, I’ve always looked forward to watching his films, and even when the film in general would be a downer his acting would always save it for me, however he could not do the same for this film, perhaps this is a sigh that even he knew this film was beyond saving. The lovely Jennifer Connelly did okay, despite I calling the cast’s overall performance a bore-fest, but I do however feel that she could have done a heck of a lot better than she did, it felt as though she just phoned in her performance for a paycheck. Kathy Bates who I just adore her acting was, well, subpar; her performance did not measure up to traditional standards of her previous performances. Jaden Smith was, well, as much as I like seeing the offspring of big name celebrities picking up the mantel of their parents, Smith did not live up to his father’s name, and as I found his performance to be rather annoying above all things to do with this film, I know some will feel I’m over criticizing a child’s performance but, he is no Will Smith, or as I like to say; the acorn does fall far from the tree. Whoever decided to cast Robert Knepper as a military colonel must have done it as either a favor to the actor or lost a bet, but Knepper does not match the role he was put into. James Hong has a small part in this, and gave lest bad performance which I must say was appreciated on my end. John Cleese is yet another fantastic actor that suffers the fate of a lacking performance, it seems to me that there’s a pattern here, could it be a bad script, or bad directing, you decide. Both actors Jon Hamm and Kyle Chandler did an equal amount of ok acting, but for the life of me it sure was hard telling them apart! It’s not that they look alike or anything, but their characters are so much alike that half the time I confused them for each other which shouldn’t happen in a film.

Final Say: The Day The Earth Stood Still could have been so much more, this film did not come out as gratifying as the 1951 original, it had promised so much to the viewers and yet it lacked in all the places needed, if the earth stood still it would have been because of this lackluster, watch at your own risk.
Copyright 2008 TCWreviews.com
All Rights Reserved
Posted by Clifford Kiyabu at 11:31 PM