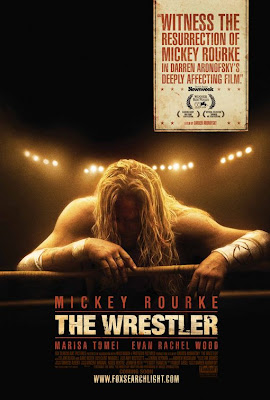 Plot: A drama centered on retired professional wrestler Randy "The Ram" Robinson as he makes his way through the independent circuit

My Thoughts: In many stories told, the main character who starts from nothing rises up becomes the person we know and loves, he’ll save the day, get the girl, and rides out into the sunset having his own happily ever after, simple as that right. But, what about what happens after the story ends, what happens to our hero when his light has faded and his sun has set, what becomes of him when he is obsolete and no longer useful.

The Wrestler is a fictional story about wrestling superstar Randy

'The Ram' Robinson (Mickey Rourke) a man who at one point during the 80’s was one the biggest wrestlers in the business, his fame was beyond that of any other typical wrestler and was consider a legend in the wrestling industry. He had it all, a wife, kid, money, fame, and all the women he could ever want begging to be with him, he had everything a wrestling superstar could ever want and then some, but the one thing he did not have and proved to be his ultimate flaw was that he never had the strength to be there for those who cared for him and needed him most and instead took the easy rout out and left, and in doing so began his slow dwindle out of superstardom and into being forgotten by all those around him. The wrestler proves to be a heart touching story about a man who’s fighting a losing battle with father time and refuses to give into the failures of his past, but when he suffers a sudden heart attack he then turns to redemption and wants to try and pick up where he left off and fix the broken piece of his life. Director Darren Aronofsky, the man behind such phenomenal films like; Pi, Requiem for a Dream, and The Fountain. Does it again by bringing us a coming of age film about life within the ring and how for some, the love of the fans is all they have left in life. The plot proves to be much much greater than I had originally anticipated. I went into this film with a medium level of anticipation but was suddenly blown away by a masterpiece of storytelling; emotions run high for The wrestler with almost no stopping to catch ones breath. Every scene for scene will either have you feeling great sadness, anger, and or pure enjoyment, I being at one point a fan of the art of ringside wrestling was brought back to the wonder years of the sport when it was purely for the entertainment and not always money, the film runs on a nice and steady peace, with an outstanding soundtrack of some of the best 80’s classic rock bands, and if you have lived through the 80’s or was born during it’s time then you’ll very much appreciate this film.

among all things, because despite his choices and his outcomes you can’t help but relate to him in so many ways. Who hasn’t made mistakes in their lives, who doesn’t wish they could undo the wrong of their past mistakes. So despite the main character sounding like a dead beat you feel for him because he lives in regret. The best part of the film in my opinion would have to be the ending because of the past outcomes leading up to the big finally of the film it had me all teary eyed, yep I said it! I fell made me tear up damn it! [Laughs] but I won’t dare spill the beans to you on how it end because that it up to the viewers to find out for themselves, but I will tell you this; it will have you running high with emotions, I guarantee it! The cinematography is simply fantastic, it gives the film this biopic like setting that makes it feel very much real and ever so believable, you’d swear this film was based on a true story after watching it. But the part that makes The Wrestler truly great is the fact that this film is what you’d call out of Director Darren Aronofsky’s normal settings; I mean after looking at his past track record this film seems hardly the type of film he’d direct, which doesn’t mean it’s bad. No no no, hardly the case, in fact it proves that he is a batter director then one has thought of, because being able to leave ones cul-de-sac, or safety harness, and still succeed in telling a fantastically compelling story is very rare and admirable indeed and I commend him for doing such a thing because many in his case has done so and failed. 2008 was a year of many surprises, many horrible disappointments and many outstanding and surprising works, and Aronofsky’s The wrestler is now one film among them, I hope it’s nominated for an Oscar because there is no doubt in my mind that it deserves to be a contender for the Oscars. Overall it was well worth the watch, I will say it won’t be for everyone, that’s a guarantee, and it is for most part a love it or hate it type of film, for me I loved it and can’t wait to see it again someday.

The story is about; Randy "The Ram" Robinson, a 1980s-era pro wrestler, has become a burnt-out shell of his former self. After he has a heart attack during a small-time match, a doctor tells him he could die if he fights again. In an effort to build a new life, Robinson takes a job at a deli and rebuilds the relationship with his daughter. But the prospect of a rematch with his old nemesis, the Ayatollah, proves too tempting to resist, even if it means risking his life.

As for the acting; so rarely do actors make a comeback for a failing

career, actor Mickey Rourke who has had a somewhat downhill career over the years went from being a hotshot to a nobody, the 90’s sure was not kind to him I will say, but his performance in The Wrestler proved to be powerful and a breakthrough, I will say if any films is to be his comeback film this would be it. He puts so much emotion and himself into the role of Randy "The Ram" Robinson that it’s more than just a role, it’s a part of him. Marisa Tomei is in my opinion a much underused actress in the business, she is a great actress who I will admit was not at all fond of her in the beginning, but over the years I have slowly began to like her acting, perhaps it’s due to age, but I found that as she gets older her acting has gotten better than ever, much like Rourke. She too puts a lot of emotion and herself into her performance which was a joy for my end. Evan Rachel Wood was spot on in her performance, I must say, I’ve been watching her career closely and I have to say; she has really blossomed in the last couple of years, being in such great films like; “Down in the Valley” “King of California” and the 2007 musical hit “Across the Universe”. I can tell you now, she is going places. The rest of the cast is built up on B and C-list actors and actresses who prove to be less than any real significant to plot, but still does a spot on job in doing their part in making this film as best it could be.

Final Say: The Wrestler has got to be one of the best films of 2008; it had an atmosphere that consumed me from start to finish, I enjoyed it a lot, and despite the style of wrestling being overall fake the film does teach it’s viewers one very important lesson, that as fake as it is, as scripted as it may be, you don’t work that kind of profession without make sacrifices and losing something dear to you. It is a sport that will work the individual down to the bone until they’re merely a shell of the person they once was. I highly recommend it!

Copyright 2008 TCWreviews.com
All Rights Reserved
Posted by Clifford Kiyabu at 9:30 AM