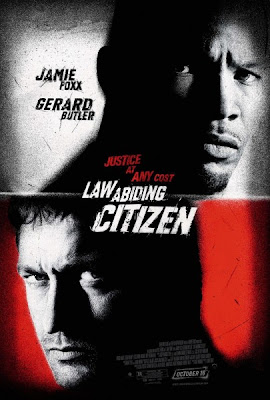 Plot: A frustrated man decides to take justice into his own hands after a plea bargain sets one of his family's killers free. He targets not only the killer but also the district attorney and others involved in the deal.

The Story is about: Clyde Shelton (Gerard Butler) a brilliant inventor orchestrates a series of high-profile murders that grip the city of Philadelphia - all from inside his jail cell. The prosecutor assigned to his case Nick Rice (Jamie Foxx) realizes he is the only one who can end the reign of terror.

My Thoughts: There’s a saying in show business; “it's not what you know, it's who you know!” which sadly is at times the inconvenient truth that is the business. Is it fair? No, but what are you going to do about it, business is business right? Well how about a different saying that is used in the legal system but with the same meaning behind it that is a frightening one to hear “It’s not what you know, it what you can prove in court.” This is a very sobering thing to hear, because the thought that an innocent person may take the rap for something they were not really at fault while the guilty party walks free is something no one in this great country wants to hear. But just like the industry, business is business and what are you going to do about it?

ng as that may sound to some I sat down to watch a film in which someone actually does something about this easily corruptible legal system. From director F. Gary Gray (director of The Italian Job (2003) and The Negotiator (1998)) and Writer/Producer Kurt Wimmer (Writer of Street Kings (2008) and Equilibrium (2002)) comes Law Abiding Citizen, a film that dives deep into more than your average revenge flick, but proves to be a rollercoaster ride into the mind of psychological mastermind that packs more punches than a bare brawl! Clyde Shelton (Played by Gerard Butler) was a mild mannered husband and loving father who had it all, but on one unfortunate night everything he ever loved was taken from him in a moment of despicable violence. After surviving a horrific home invasion which brought him close to death and witnessing his wife and daughter raped and murdered in front of him, all he desired was to see these men tried for the crimes they committed, and even though they may be a chance they could walk free due to a lack of evidence he would still be happy knowing they got put through the system accordingly. However when you’ve got a power-hungry attorney who is more out for his own personal gain by trying to maintain a high conviction rate. The odds of getting what you want are most likely not going to be in the cards. After one of the men who killed his family walks free from the death penalty, Shelton feels he’s been wronged by the system that was built to bring justice to those who seek it, and now seeks to avenge his family by killing the one who got away, as well as all those in the legal system who allowed it to happen. What I most liked about the film is the fact it blurs the lines between good and evil and straight-out anarchy. It’s unforgiving and never lets up for a single moment.

Though Gerard Butler’s character, Clyde Shelton, is seen as the film’s antagonis

t while Jamie Foxx’s character, Nick Rice, is considerably seen as the protagonist of the story, anyone with a single bit of a conscience can see that its complete nonsense to chose a side in this film, nor can you truly categorize either of them as such. Though Nick Rice is considered the “good guy,” his actions in the beginning of the film as well as throughout can be deemed as questionable due to the fact he’d rather take a small win and let one of the criminals walk free than nothing at all, which serves his hunger for power and personal gain within the system. But as the film goes you begin to feel remorse for him as he witnesses his friends and colleagues start dying one by one. Shelton, a man who is considered the villain of the story can’t really be seen as a full fledged “Bad guy” because you feel a great deal for him after he loses his family, and thus you sympathize for him. Overall the film’s two main characters can be seen more as couple of unfortunate people who was thrown into a predicament that neither really deserved. Does the film have problems? Sure it does. One of the main problems I had dealt mostly with the editing with the film. The scene in which Shelton is escorted outside the prison to have a privet conversation with Rice was great scene, but a poorly edited one at that, in the beginning of the scene we see Shelton getting roughed up by Rice, and he’s got blood coming out of his mouth and on his face. However in the very next moment he doesn’t have a single drop of blood on him at all. This was very frustrating for me, and I wished they’d have never edited it that why. Aside from that I didn’t have any real problems with the film.

ting: Gerard Butler was fantastic, he’s manage to prove his worth as an actor time and time again with films like “RocknRolla,” Nim's Island,” “P.S. I Love You” and “300”. His performance is nothing sort of brilliance! And he continues to show this in Law Abiding Citizen. Jamie Foxx is an actor that has gained great respect from me over the years. It wasn’t long ago I used to see him as a C-List comedian and a hack in the acting department. However that has seriously change for me over the years, after watching him give stellar performances one after another in films like “Collateral,” “Ray,” “Jarhead,” “Dreamgirls,” “The Kingdom” and “The Soloist”. It’s intriguing to think it wasn’t long ago he was such a terrible actor, and now today it’s very much the opposite. I was never a Regina Hall fan, mainly because I didn’t care for her lackluster performance in the “Scary Movie” films, as well as her inability to be humorous in them. However I got my chance to see her act in a serious role for a change. And believe me when I say: not only was it great, but it was the first time I saw her put hard effort into her performance. Emerald-Angel Young did a pretty decent and adequate job in her performance. Acting alongside Foxx and Hall as their daughter in the film worked fantastically. Christian Stolte and Josh Stewart did a fine job in their brief roles as the film’s real villains. From the get-go the viewers are put in a situation of wanting to just hate these two in the most unforgiving manner, that when their grizzly demise comes to pass you’ll be cheering it on. Stolte and Stewart were outstanding. Other notable mentions in the film go to Colm Meaney, Bruce McGill and Leslie Bibb who are magnificent in this.

Final Say: Law Abiding Citizen was a fantastic film from start to finish. Though the film has its faults, and mild plot holes, you can’t help but appreciate this film’s fine quality for being blunt and unforgiving. I highly recommend!

Copyright 2009 TCWreviews.com
All Rights Reserved
Posted by Clifford Kiyabu at 12:32 AM