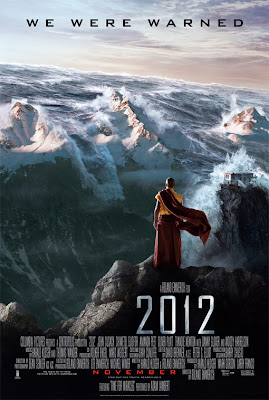 Plot: An epic adventure about a global cataclysm that brings an end to the world and tells of the heroic struggle of the survivors.

The Story is about: Centuries ago, the Mayans left us their calendar, with a clear end date and all that it implies. By 2012, we'll know -- we were warned. Never before has a date in history been so significant to so many cultures, so many religions, scientists, and governments. A global cataclysm brings an end to the world and tells of the heroic struggle of the survivors.

My Thoughts: Why are people so infatuated with the idea of the end of the world? Better yet, why are people always contemplating if the end may or may not be in their lifetime? Perhaps it’s because people want the answers to what cannot be so easily answered, or perhaps the majority in this world (even if they won‘t admit it) is as wickedly cynical as I (yes folks I too wonder when the end will be!) It does however baffles me sometimes when I hear people bring up the conversation of whether or not they’d be alive to see the world come to an end. I have no problem with talking about such, as it does in fact amuse me quite a bit and arouses my imagination with the infinite possibilities of how the dramatic end will be like, and if man will go out loudly with a bang or silently drift off into the quiet slumber of history, but what interests me is that the majority of people in the world would prefer not knowing when exactly they’d meet their maker (provided they have a spiritual based faith) compared to the small minority of people out there who would most certainly want to know when their own time was approaching, yet this same majority of people who prefer to live life impaired from the knowledge of how many years they have left is in usually the most curious of the bunch as to wanting to know when all life as we know it was coming to it’s end. *cough, cough!* Hypocrisy! *cough, cough!*

Seriously though, I don’t know how or when the end will happen, I just know that history has shown everything has both a beginning and an end, and though the discussion over our beginning has been debated upon for as long as man was able to count the number of fingers and toes on his hands and feet, it’s only a matter of time before our species bears witnesses to it’s inevitable end, and I, however, believe that when humanity’s chapter comes to a close life will go on without us and the world will continue to spin around the sun without us on it’s back.

merich, the man behind such notable big-budget popcorn flicks such as: 10,000 BC (2008), The Day After Tomorrow (2004), Godzilla (1998) and Independence Day (1996), brings us his latest film, 2012 (2009). A disaster flick to end all disaster flicks, and at the same time, becomes it’s own disaster! The film’s plot is loosely structured around the premise of the end of the 13th baktun cycle of the ancient Mesoamerican (Mayan) long count calendar, the film explores the idea of “What if” the Mayans and other past civilizations really did foresee this day coming thousands of years ahead of their time. The film is without a doubt an orgasmic spectacle for these viewing eyes, with gorgeous cinematography and pulse pounding adrenaline fueled scenes being thrown at you almost nonstop leaving you almost breathless, one would normally argue that this modern-day Noah’s ark tale would no doubt be the blockbuster popcorn film of the year. However I cannot stress enough how much this fails on a grand scale. For one thing it’s logic should not be taken to heart, because the illogical conclusions this film runs on not only undermines the original Mayan prophecy, but also blast’s viewers with false incoherent and somewhat laughable scare tactics of how the world will come to an end on 2012! and how there is little next to nothing we can do to prevent it, if you ask me it reminds me a heck of a lot like the Y2K incident (Speak up folks, who here overstocked their homes with useless survival supplies for that humiliating event?) when you take into account all the mindless action and needless awkward comedic moments thrown around in 2012, you can’t help but feel that Michael Bay’s Transformers: Revenge of the Fallen (2009) was a masterpiece plot-wise compared to this, and believe me that’s saying a lot coming from me.

But to be fair, 2012 does have it’s fair share of redeeming moment, I’ll give it that much, the film manages to capture it’s audiences at quite a few tear-jerking points that wi

ll no doubt have you overwhelmed with emotions. One of these emotional wrecking scenes in particular revolved around the characters Harry Helmsley (Mankuma) and Tony Delgatto (Segal), these two men are your typical odd couple-like characters who are enjoying their twilight years lounging aboard a cruise liner as jazz performers, keep in mind that their storyline plays no significant role to the film’s overall plot, but rather a side story that is only a fraction of what’s going on in the film, however their screen time manages to manipulate the audiences into feeling a great deal of empathy for them from the get-go, meanly because it shows that their chance of survival in the film is next to zero, leaving them S.O.L. and J.W.F. (S*** Out of Luck and Jolly-Well F*****). To make matters worst, their only connection in the film is that Harry is the father of American geologist Adrian Helmsmen (Ejiofor). Other than that I felt no sympathy for the majority of the characters that bite the big one, meanly because it’s hard to feel anything for them when they are so poorly developed as two dimensional characters. To be honest, what I found most disappointing with 2012 is the fact I (FYI, not socking one bit, but I was not the only one in the theater reacting to the film like this) ended up finding myself rolling my eyes with despair at every sad attempt at humor and chuckling my butt off at the more serous of moments in the film.

As for the acting: Well what can I say, despite the slew of A-Listers, acting isn’t t

his film’s strong point, in fact it often plays out as it’s weakest. John Cusack has always been a favorite of mine, and often at times I’ve been a bit bias towards his films, and yet his presence couldn’t even win me over in this than alone save the film. However he does mange to pull off a somewhat okay performance, however don’t hold your breath because it’s defiantly not him at his best. Generally I like Amanda Peet because she’s a fairly talented actress that can make you easily laugh or cry and no matter what role she’s in she always has that gentle sweetheart look on her face that easily wins people over, and it saddens me to see that the chemistry between her and Cusack was greatly absent in this film, which is even more so disappointing because Peet and Cusack have don very well together in the chemistry department in past films like: Identity (2003) and Martian Child (2007) just to name a few, but it seems that this was not the case with 2012. Chiwetel Ejiofor was fantastic in his performance despite my displease with the acting in general, though I will say I felt the romantic courting that was being set up between Ejiofor and Thandie Newton characters in the film was not only rushed, but did not at all feel the slightest bit believable.

Oliver Platt was not so bad, though at times I did feel a bit disappointed in his performance because here‘s an actor that normally co-stars in films that are

somewhat decent, and even though he at times star in films that are just down right embarrassing to watch (can somebody please explain to me why the film “Year One”? (2009)) than alone acting in it, he still manages to pull his charm into what ever role he‘s in, however this was not the case with 2012 as I found his classy charm was gravely absent. Woody Harrelson is well known for playing controversial roles in past which for better or worse I’ve always found very amusing to see, his role in 2012 is yet another one of those head turning roles yet, which doesn’t cease to amaze me, because it seems the man love to be “that” guy in every film I see him in, is his performance good? Well that debatable, if you were to ask me it seemed like he was just being himself in the film [Insert pun here]. Last but certainly not least, actor Danny Glover, the man who graced the big-screen with his signature phrase “I'm too old for this shit!” was the biggest of all disappointment, why? Because he gave such a dull performance in the role of President Thomas Wilson that he left me unsold, and believe me, being a hug fan of his work over the years I was very disappointed. George Segal and Blu Mankuma were among the few in this film who I enjoyed performance-wise. I could go on and on about the rest of the cast but I won’t dare bore everyone who reads this to death.

Final Say: Despite my feelings toward this film not having much a chance of being a major critical success among film critics like myself long before it’s realest, I took the high road and withheld my Judgement and went into the film with hope and optimism, I hate to play devil's advocate here, but sadly I told you so, the film was just as much as it was expected of itself, a mindless disaster film that’s only purpose is to serve one’s fears and nothing else and believe me it more often than it should it fails at that too! If one is still curious to see this disaster of a film than I recommend you do the courteous thing and check your brain at the door first. Watch at your own risk!
Copyright 2009 TCWreviews.com
All Rights Reserved
Posted by Clifford Kiyabu at 6:24 AM