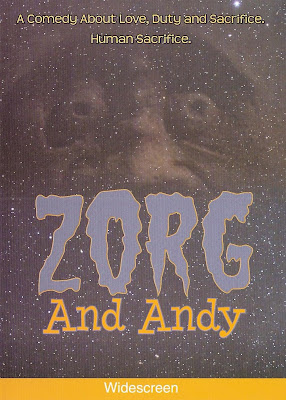 Plot: Andy (Ganyo) an undergraduate who’ll must recover an idol that was stolen from him after it was placed with him to be cleaned, he’ll go up against a mysterious woman killing anyone and everyone who knows about the idol, a cult that wants it for themselves, and if that wasn't enough already, trying to win the girl. Can Andy pull it all off?

The Story is about: Perpetual undergraduate Andy has one last chance to keep his financial aid: a work-study job at the mysterious Kungsbaden Museum. After a beautiful stranger steals an ancient fertility idol in his care, Andy sets out into the night to recover it. In the process, he discovers that his idyllic campus is home to a network of bloodthirsty pagan cults, all of whom are fighting over the idol.

My thoughts: Today’s modern moviegoer will spend their time looking for the next best thing in film. The ever so Oscar worthy film or the next big popcorn flick to see, because anything less is just icing on the cake. This of course is where I stand at odds with my own generation, because they don’t know how to appreciate the fine quality of a classy B-Movie. Then again most of the modern movie going community didn’t spend their nights staying up into the wee early morning hour watching marathons of cheesy B-films like I did growing up. Which of course is why you could say that it’s because of this that I’ve learned to see pass the simple qualities of visual filmmaking that is only skin deep.

Zorg and Andy is a film that purposely sets itself up as a B-style movie. Because it’s not trying to be the next big hit, but rather a cheap check your brain at the door thrill! This is a form of moviemaking that is at times forgotten and unappreciated. The film follows Andy, a perpetual undergraduate who screws up time and time again and never seems to get a break. And when he’s down to just one last chance to keep his financial aid he gets a job working for the Kungsbaden Museum where his first assignment is to clean and prepare a small idol that just arrived, however little is known of the idol, other than the fact a mysterious woman is killing anyone and everyone who comes in contact with it, and to make matters worst an on campus cult has stolen it. Now it’s up to Andy to recover the idol and uncover the secrets behind it. As cheesy as it may sound, it’s actually kind of entertaining for those looking to checkout a film that doesn’t require much out of you but a set of eyes and an hour of your time.

Where I appreciated the film for its cheesiness, it does however have a lot of problems that I had with it. The big problem I had with the film was that, though the film’s premise is to be as much a B-movie as it can be, it overdoes itself at times with over the top jokes that instead of being delivered in a humorous manner instead hits the viewing audience as being rushed and amateurish which serves more as a weakness to the film rather than keeping with the theme of the genre. But the biggest weak point stands to be the film’s runtime, which is only 62 minutes from start to finish. Though I have fairly enjoyed short films in recent history, Zorg and Andy’s Achilles’ heel seems to be the fact it lacks character development. Because the film does not allow the character’s to be more three dimensional we are left unable to have any compassion or will for these characters. Though I will admit that despite me being displeased with the film in general I will say that the film does have its moments of enjoyment. Sadly though, these moments of enjoyment never expand into becoming anything more than just moments. And because of this, no matter how much I tried, it simply was not my cup of tea.

As for the acting: Well what can I say, the acting was very problematic for me. First there is Scott Ganyo, who I could not get into liking his character, nor could I find an ounce of myself to enjoy his performance. Kate Rudd was probably one of the only performances I fairly enjoyed, though there are times in the film where I felt she could have done much better. Jennifer Wilkens was okay, except for the part where her character annoyed the heck out of me. If it was meant to be like that than she did a good job, otherwise I was not enjoying her on-screen time. I was not at all thrilled with Sally Weatherston performance, mainly because she didn’t sale me on the character’s attitude all that much. Last but certainly not least there’s Nick Kraynak, who plays “The Pig” was probably the most interesting thing about the film, because the actors spend the whole course of the film with a pig’s mask on. Sadly though as much as I thought it was fascinating I found it rather weak on the fact there is no explanation as to why this person where’s the mask or a punch line to it assuming it was meant to be a joke that is.

Final Say: Zorg and Andy was an interesting film with a lot of promise to become a cult hit but ends up missing it’s target half the time due to it’s failed attempts at trying to be funny. Nothing personal against the film or filmmaker, but a comedy not being humorous is in my opinion, a deal breaker.

Copyright 2009 TCWreviews.com
All Rights Reserved
Posted by Clifford Kiyabu at 12:19 AM