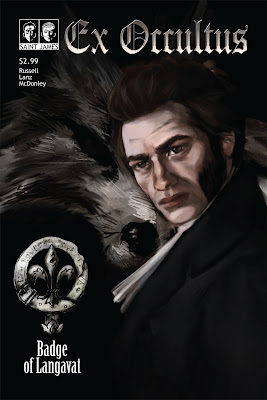 Plot: 1864, Scotland - Francis Wakefield and fellow occult hunter Fergus Duff find themselves investigating the disappearance of children from nearby villages. Their hunt leads them to a forgotten castle belonging to a family of undead, cursed werewolves who have nefarious plans for the taken.

My Thoughts: It’s a well known fact that I’m a hug fan of the graphic arts (Sophisticated Slang for Comic Book Nerd!) and have been one for as long as I could remember . Like most readers I indulged into the many timeless classic adventures of the many popular superhero titles like: SPIDER-MAN, BATMAN, CAPTAIN AMERICA, THORE, and the beloved Uncanny X-MEN and so forth on a weekly bases. Many of which have become the typical starter guide for any reader willing to dive into the comic realm, and in some cases these simple titles are considered by some as the holy bible of comics. But over the last few years I have come to love the not so well known, a genre of comics that’s set for a more mature reading audience like: THE BOYS, FABLES, and THE WALKING DEAD, titles like these are not for young readers and should never ever be recommended for such.

This turn in taste of genre has also given me the aired taste for the indie side of comics, which evidently lead me to Ex Occultus: The Badge of Langavat, which is written by Robert James Russell & Jesse Young of Saint James Comics and art work by Sandra Lanz. This comic is on it’s own level of dark storytelling that proves to be breathtaking and very entertaining in it‘s own unique way to say the least. The plot is based on a real legend from Scotland and follows two Victorian era investigators, Fergus Duff and Francis Wakefield traveling to the Island of Benbecula in the Outer Hebrides to find out if the legendary werewolves are responsible for the kidnapping of children in the local area. As the story goes on the pair finds the werewolves’ hideout, hoping to have the upper hand over them by catching them off their guard Fergus and Wakefield is quickly mistaken and falls into a trap which immediately thrown into the fight head on against an entire clan of blood thirsty werewolves looking to both Fergus and Wakefield as their next meal. armed to the teeth with pistils filed with silver bullets, a pair of silver chainmail and the usage of a couple of fairy-like creatures. Have the werewolves finally met their match, or could this easily become the last adventure that both Fergus and Wakefield will have?

I at first didn’t hold much stock in the comic, mainly because the story is told as a one shot issue, and usually one shots mostly work only after the readers have learned a little bit about the characters in question (I mean you wouldn’t dive into a Fantastic Four one shot issue without having some basic knowledge of Victor Von Doom’s hatred for Reed Richards right?) most tales like this are usually set in a mini series event with the story unfolding over the course of multiple issues so that the individual characters are given room for development so that there‘s a more three dimensional sense to them, with that said I was a little worried at first that the story would be cut short due to it’s length, however this was not the case as the story was fairly decent which clearly shows that Robert James Russell & Jesse Young did their home work which I commend them for, for bringing their own original uniqueness, and for deciding to write about one of the less popular folklores.

Upon doing my own little research on such before writing this review I barely could find any literature at my disposal online except for a few mentions here and there, meaning some heavy research was done on their part while trading nether action over story and viscera. Though I will say that the story doesn’t go without problems, the biggest problem I had laid with the development of the main character’s Fergus and Wakefield, because the story is 100% devoted to the comic’s plot there simply isn’t much background for the readers to appreciate the main characters, which I blame on the length of the comic, but to an extent this is in fact forgivable on the motion that it‘s better to have one problem with any story than to have two or three problems, am I right or what? The art work which is done by Sandra Lanz was pretty decent from where I‘m standing. The lovely blend of gray-tones in black and white which gives it this noir setting that works beautifully. Though there are some rough edges to some of her art work, but all that can easily be forgiven and forgotten when you stand back for a moment and see that her art work really does paint this story into a visual reality that is satisfactory.

Final Say: Ex Occultus: The Badge of Langavat is defiantly something worth checking out even if you’re not all that into comics, and though it has it‘s rough edges here and there, there’s a lot of promise here and room for improvement in the near future that shows this is a comic that’s here to stay.