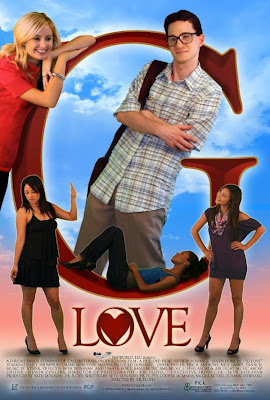 I know news articles pertaining to everything in the entertainment field haven’t exactly been on par with movie reviews over the year, but I’m hoping to turn that around with the new year on it’s way, and what better why than by starting with this article right? Recently I got word through the grape vine that a certain up and coming director has just been recognized by "The Accolade Film Awards" and was awarded an "Award of Merit" for his new film G Love, which from what I‘ve heard has left quite an impression among certain followings and even received a few nods by the awards committee. If you still haven’t s clue as to who the heck I’m talking about than let it be known that it’s only a matter of time before Director P.B. Floyd and Actor/Producer Seth Donavan make their mark. Read on below for more details.

LOS ANGELES Oct. 29, 2009 --- Youth in their teens and early twenties
get the insider's view of the actions some people will take for love
in Director P.B. Floyd's film, G Love which has won a prestigious Award of Merit from The Accolade Film Awards Competition.

Floyd took time from working on his new teen dance family film, "I
Wanna Dance," to work on "G Love." The short romantic comedy, starring
Seth Donavan as Steven Dork, presents the idea that there is love for everybody, if they can just be themselves.

Since winning the award, Floyd is making plans to produce "G Love"
into a feature-length film to share more of the humor and imagination
Donavan's Dork character brings to a wide-theatrical release.

"With the comedic talent of Jim Carrey, and the looks of a young Tom
Hanks, Seth Donavan is making his mark to ensure his spot at the top
of the motion picture industry," Floyd said.

"Seth really stood out as Steven Dork," Floyd said. "His quirky
reactions and cool responses made this movie more intense. He did a
great job of feeding off the other actors' energy to help deliver the
story with a lot of finesse."

"The entire production team, including editor Devon V. Collins and
sound designer Mike Snugg, created an exceptional product," said
Donavan, who also produced the film. "This extraordinary team was able
to put together a final product that surprised even us with its polish
and sparkle. By the ending of the script's deliverance, I recognized
that this could be something special."

The Accolade Competition recognizes film, television and videography
professionals who demonstrate exceptional achievement in craft and
creativity, and those who produce standout entertainment or contribute
to profound social change. Entries are judged by professionals in the
film and television industry. Information about The Accolade and a
list of recent winners can be found at TheAccolade.net

"The goal of The Accolade is to help winners achieve the recognition
they so deserve, but it is not an easy award to win," said Thomas
Baker, Ph.D., who chairs The Accolade Competition. "Entries are
received from around the world, so this award helps set the standard
for craft and creativity. The judges were pleased with the
exceptionally high quality of entries for this particular
competition."

In winning an Accolade, "G Love" joins the ranks of other high-profile
winners of this internationally respected award.

For more information about the film "G Love" or it’s cast head on over to studiomatrix.com and contact Wendy Shepherd and/or visit the official "G Love" Website at glovemovie.com
Posted by Clifford Kiyabu at 4:58 AM