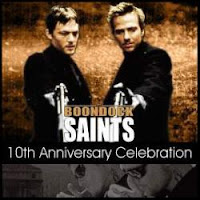 Wendy Shepherd over at studiomatrix.com has just notified me that the Boondock Saints 10th anniversary celebration is coming up and it’s definitely not going unnoticed especially with the recent publicity from it‘s sequel which was released almost ten years to the day of it‘s original! Read below on what was posted on eventful.com…

Do you want to play a role in bringing the 10th Anniversary
Celebration of the original Boondock Saints to the big screen in movie
theatres nationwide for an exclusive one-night event around St.
Patrick’s Day 2010? If so, demand that it come to the big screen in
your hometown! We’re planning to pull out all of the stops for this
event with special behind-the-scenes footage, an interview with
writer/director Troy Duffy and other special guests and surprises.
It’s up to you to make this event happen! Demand it NOW, post the
widget to your personal pages and encourage your friends to do the
same! The sooner you tell us you want it, the sooner we can start
making it happen.

The Original didn’t get the wide release it deserved nor was it well received by most of the mainstream critics. But over the years is has received a massive cult following that has spawn a sequel and cause some critics to change their opinion on the film from basing to praising! For those of you who don’t know, Boondock Saints followed Fraternal twins Connor and Murphy McManus (Played By Sean Patrick Flanery and Norman Reedus) who set out to rid Boston of the evil men operating there while being tracked down by an upbeat FBI agent (Played by Willem Dafoe).

Head on over to eventful.com to demand it in your city if you want to take part in the celebration!
Posted by Clifford Kiyabu at 9:47 AM