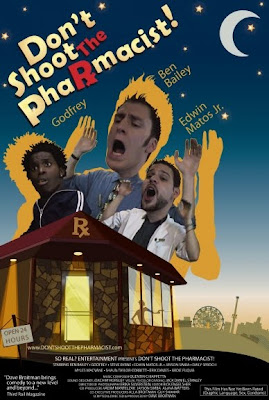 Plot: A Pharmacist, braves a memorably zany night as he muses about life as a Vegas roulette dealer while encountering a range of odd customers

The Story is about: 2008 Emmy Winner Ben Bailey plays Zack Wright, a Pharmacist stuck on a zany graveyard shift in Brooklyn who must do everything in his power to simply survive the night.

My Thoughts: I’ve always wondered, what is the definition of a dream job? For some it’s one with a high pay, while for others it’s one that holds a sense of prestige and entitlement behind it, and for the few, a dream job is simply one that does not require money nor power but requires something that neither money or entitlement can buy. While those enjoy making a lot of money, it’s greatly depressing to force one’s self to get out of bed every morning to do something that gives little enjoyment to the soul, and to do this reputedly over and over each and every day can be greatly tiresome to a point where it can be compared to a slow and painful death. For the few, a dream job is something that makes you want to get out of that forsaken bed every morning, it put’s a voluntary smile on your face everytime you walk through the doors of your work place and fills you up with glee inside. Unfortunately not everyone get’s to feel what that feels like.

ecently I had the pleasure of reviewing the film; Don’t shoot the pharmacist! A comedy about Zack Wright (Played by Ben Bailey), a pharmacist who dreams of being a Los Vegas roulette dealer but works miserably day in day out in a small 24Hr New Jersey Pharmacy. The film starts up on Zack’s day off, or what should have been his day off to be exact. After getting a phone call from his work notifying him that his co-worker who’s supposed to cover the nightshift called in sick, Zack is forced to cover for the guy wither he likes it or not. The film take place over the course of one very humorous and eventful evening with Zack encountering a slew of weird characters who hangs out around a pharmacy that’s open 24 hours. From the over priced prostitute who everyone wants a piece of, to the a guy suffering from OCD (Obsessive Compulsive Disorder) to the crazy old guy who seems to be just wondering in and out of the place constantly. You know, the regulars! Anyways, the film is a delightful indie comedy that doesn’t hold back on being raunchy and crude and sometimes a little unusual. Like a comedy straight out of the 90’s, Don’t shoot the pharmacist! Carries a certain sense of comedic film Noir that has been mostly absent in most of these modern comedies.

m the early 90‘s. Does Kevin Smith’s cult classic comedy “Clerks” ring any belles? Well it certainly should if you are any bit of a fanboy or fangirl because it revolutionized the modern comedy genre in ways we’re still trying to grasp, and the film; Don’t shoot the pharmacist! pays homage to that sense of comedy in more ways than one, rather it was the filmmakers intention to do just that or not is yet to be seen, either way the film hits all it’s comedic punch line on target which is what makes it work so perfectly. But let me get one thing clear: though I’ve said the film plays out very closely in the same sense that clerks does (Which is basically the main characters and the situations their put in) I must stress that it is not a carbine copy and or a rip-off in any way, but rather brings it’s own brand of uniqueness to the table. Does this make it a good film? Yes, is it perfect? No, not by a long shot! The film does have it’s problem don’t get me wrong, but none of which however hurts the film in any real bad way. But to add to that I must point out one problem I had with the film that I feel needs addressing which is in regards to the plot. While the plot’s main focus is supposed to be on Zack’s dream of one day becoming a Los Vegas roulette dealer. We see very little of that presented in the film, to which point you’ll often at times completely forget what was is the main character’s life goal was to begin with, I really wished they’d had included a much deeper in-depth look into the reasons behind his wanting to become a roulette dealer, never the less the film was still an entertaining peace of cinema to experience no less.

acting: what can I say, the acting was quite enjoyable here, it’s certainly nothing Oscar worthy but still something that keeps the viewer entertained. Ben Bailey whom anyone who watches the Discovery Chanel will know right off the bat from the show “Cash Cab” was fantastic in the lead as Zack Wright, he gave the character this unsettling tone of humor that projected quite nicely. Edwin Matos Jr. was very entertaining, he matched Bailey’s unsettling comedic tone with a wise guy sense of humor that made them a perfect onscreen duo. I can’t say I’m much a fan of Godfrey mainly because I’ve seen some of his past performances in other films and just like this one I wasn’t pleased, not to mention his form of comedy tends to be a bit over the top for my liking, however despite my not caring much for his performance in this film I will say it was the most tolerable if that helps in anyway. Jayson Simba and Shaun Taylor-Corbett fairly decent but could have been a little better, Myles MacVane gave probably the most wired yet peculiar performance in the film, because it‘s authentically believable to a point where you‘d believe that this man is actually somewhat disturbed. Ardie Fuqua and Emily Sproch give wonderful performances that complements the film’s tone and works incredibly well with the situations.

Final Say: Don’t shoot the pharmacist! Was an interesting film to see because it doesn’t try to be anything more than it was which is a heck of a comedic trip full of wired. Is the film full of holes? Yes, is it original? Not by a long shot, but what it was is a wonderful piece of cinematic entertainment that is worth checking out. I recommend it!

Copyright 2009 TCWreviews.com
All Rights Reserved
Posted by Clifford Kiyabu at 10:41 AM