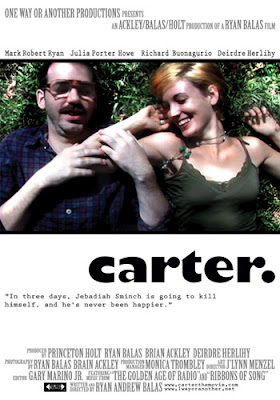 Plot: After vowing he’d kill himself at the age of 25 if he was not married by 23. Jebadiah Sminch is in love with Carter the only woman who completes him; however he is only three days away from his 25th birthday and still unmarried. Will Jebadiah stick to vow or not?

The Story is about: When Jebadiah was 17 he vowed to kill himself when he turned 25 if he wasn't married by the time he was 23. This film takes place three days before his 25th birthday. Jeb is in love with Carter, but unmarried. Now he must make the hardest decision of his life; be with the woman he loves or carry forward with his pact.

of some sort in our lives, may it be a pact to lost some of that belly fat we gained over the holidays, or one at the beginning of the new year to change something about your lifestyle. Pacts are more common than most would think. But what if someone were to make a pact with themselves that would ultimately result in their own demise? That’s where the film Carter comes into play. The film is widely scaled with the overall premise of wanting to re-live that spark of the past, and feeling the awful regret of losing the dream. The film Carter centralizes itself around Jebadiah Sminch (Played by Mark Robert Ryan) a man who made a pact with himself as a teenager that if he didn’t get married by the age of 23 he was going to kill himself on his 25 birthday, the only problem is he has found someone who makes him happy. So now he’s torn between either following through with the pact or stick with the good thing he’s got going with the woman he loves. Now I know what you’re thinking; if the main character the film is surrounded around is called “Jebadiah” than where the heck did the title name “Carter” come from? Well that’s a simple question to answer, because Carter (Played by Julia Porter Howe) is the name of Jebadiah’s girlfriend who loves him so much that it’s killing her deep down inside knowing that though he loves her, he’s too honor bound to his own pact that he’s willing to throw away the love they have just so he can remain true to himself. The question is though, what will he decide in the end, will it be a happen ending or a bitter sweet one?

What can I say? For a lack of better words, the film is a bit of a mixed bag for me. T

hough I liked some of the aspects the film presented, there were a lot of problems there as well. As a pro, the film presented this fantastic opening which introduced the female lead in a silent, yet forth telling scene where though she had no verbal lines, her overall body language communicated her intentions very well. The relationship between the two main characters on screen works well at times but also hurts the storyline too; their unconditional love on screen definitely does not go unnoticed. However, while their unconditional love proves to be atmospheric at times and gives the viewers a sense of realism, it lacks intimacy on a grand scale. I waited and waited for something intimate to happen between the two of them to convince me that they were believably in love, but upon waiting for this to happen throughout the film’s course I was left unsold on the idea and instead keep getting the overwhelming “just friends” vibe from them. Even as I watched them kiss each other on screen it felt, in my opinion, forced. The other problem I had often at times was the dialogue. Nothing personal against the dialogue in the film, but the way it’s projected on screen comes off rather weak at times. I really wanted to enjoy this film as much as I did the last two installments in the One Way or Another Productions “Naked Series”, and to some extent I did enjoy a part of it. But in my opinion the film just didn’t quite live up to the hype I felt from the previous films.

: Julia Porter Howe was great, I loved her take on the opening very much. The opening scene with her was fantastic because she managed to express so much in her emotions and body language without so much as saying a single word, which is a great talent to have believe it or not. However, there were moments throughout the film where her performance in general was how should I say, rocky? It’s not that her performance was bad after the beginning of the, it‘s just that there were times where I felt that her potential was being held back for some reason. Mark Robert Ryan was not that impressive to me, in fact I had the hardest time following his performance in the film due to the mustache. Yep you read right, that mustache of his was just one big distraction for me. So much that I had to re-watch a few scenes over just to focus better [Laughs] but it’s because of this that I honestly could not find the compassion in me to feel for his character in his most darkest hour. Deirdre Herlihy was pretty okay, her performance was slightly better in this than when I last caught a glimpse of her acting style in the film “Uptown” earlier this year. Perhaps this means she’s making great improvements? Either way she stands to be adequate in this. Aside from directing this film Ryan Andrew Balas does a pretty decent job in his performance, though I will admit that I have yet to see any of his other works to really place a true judgment.

Final Say: Carter was a very interesting concept of a film. Something you don’t see too often in movies now days. However the concept of the film may have intrigued me, I still had a hard time following this film close to heart. I really wanted to like this film, I really did because the overall concept is very alluring and yet, the film is not. If only it had a few changes done to it perhaps this film could have lived up to the promise it presented.

Copyright 2009 TCWreviews.com
All Rights Reserved
Posted by Clifford Kiyabu at 3:42 AM