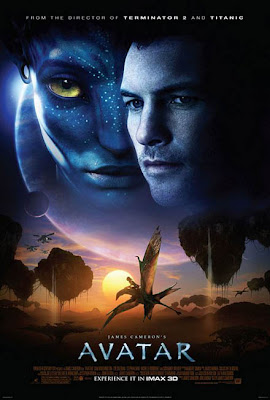 Plot: A paraplegic marine dispatched to the moon Pandora on a unique mission becomes torn between following his orders and protecting the world he feels is his home.

The Story is about: AVATAR takes us to a spectacular world beyond imagination, where a reluctant hero embarks on an epic adventure, ultimately fighting to save the alien world he has learned to call home. James Cameron, the Oscar-winning director of "Titanic," first conceived the film 15 years ago, when the means to realize his vision did not exist yet. Now, after four years of production, AVATAR, a live action film with a new generation of special effects, delivers a fully immersive cinematic experience of a new kind, where the revolutionary technology invented to make the film disappears into the emotion of the characters and the sweep of the story.

My Thoughts: In all my years I’ve always had a hunger for wanting to observe and learn the many different cultures and historical events the world has to offer, from life’s most horrific atrocities like wars without end to life’s greatest creation both natural and man made, what I‘ve learned though is that in all corners of the globe history has shown one quintessential truth: man fears what he simply does not understand, and he will destroy what he doesn’t understand! How much beauty has this world once had, and still has that is being destroyed by man all over the world? And that doesn’t include man’s thirst for taking what’s not his.

or a long, long time I have stood in disbelief over the production of James Cameron’s latest flick Avatar Mainly because I’ve always thought of him as an overrated director whom people over exaggerate from time to time, I mean sure he’s made some really good films in the past but I never really saw him as anything masterpiece like worthy, especially after he made Titanic (Don‘t get me started, I was forced to watch that movie in theaters so many times that I can recite the film’s dialogue scene for scene in my head.) so after he decided to leave directing to journey around the world by sea for all these years I figured with 12 years absent from the directing spot light he was pretty much done, and there was no way we’d get back the man we all knew from the 80’s and 90’s, I mean you’d have to take into account that 12 years is a long time, and the times have changed and he may not be able to live up to the monumental prestige he built over the course of 28 years, so I basically pre-judged this film from the get-go with a somewhat negative outlook on it, heck I didn‘t even think it would become anything note worthy when I first heard about it years ago when it was still in it‘s conceptual stage. Well that was before I sat down to watch it, and let me tell you; with all the fibers of my being telling me this film did not have the slightest chance of succeeding, I fell in love with the magnificently stunning world that is the Pandora!

Pandora is a lush earth-like moon that rotates around the gas giant Polyphemus, in the

Alpha Centauri system and is inhabited by the na’vi, a species of humanoid-like natives that are blue skin and stand at rightly 10 feet or so tall. These wonderful beings are only the tip of the ice berg in the film Avatar. James Cameron has grafted a plot that is with layers of sub-messages that many film critics who’ve criticized the film failed to notice that the plot in itself is enriched with an echoing past tale presented in a futuristic setting, it’s like a modern telling of Pocahontas, I won’t go much future into saying anything else so as to not ruin the film for anyone. But I will say that Director James Cameron has outdone himself with creating one of the most visually unique enriching worlds with the film Avatar, what he’s done is bring more than just a film, but an experience of the decade! The stunning visual effects are second to none, and the storyline is a gripping hang on to the edge of your seat experience that is fully satisfying to say the least. I cannot stress how truly beautiful a film this is overall other than it’s nothing short of EPIC! The only slight problem the film had which I honestly don’t see it hurting the film in the slightest way is the dialogue some of the characters use in the film, it often at times seemed a little cheesy, but after a second viewing (Yes, this film needs to be viewed more than once to truly appreciate the wonders Cameron has created) I found it somewhat acceptable.

As for the acting: I’m not sure what the heck actor Sam

Worthington did to make such an impression as to Star in two major films this year (the other being Terminator Salvation (2009)) but I’m glad he did it because he was fantastic in the leading male role, though I wasn’t to keen on his performance in Terminator Salvation, the latter was stunning to say the least, I greatly look forward to see what he’s got going for him next. Zoe Saldana was out-of-this-world in the leading female role, which is a huge step up I must say, because in my opinion she has usually played mediocre roles over the last decade, but in this year alone has changed my entire opinion on her after watching her preformed in this and in the summer hit Star Trek (2009). Sigourney Weaver has always been an on and off enjoyment for me, meanly because while I liked just about everything she’s done throughout the 80’s and 90’s, I’ve never fully enjoyed her work as an actress in the 00’s era as much as I’ve done in the past, but once again she has saved herself from falling from grace with her performance in Avatar as Dr. Grace Augustine, and brings out the part of herself that is reminiscent of the Weaver we’ve all come to love. Stephen Lang give a stellar performance that commanded authority on screen, and though he has some of the most cheesiest dialogue in the whole film, it’s clear the he was born for this part as he suit it perfectly.

It’s not unheard of that I’m a big Michelle Rodriguez fan, I’ve enjoyed her acting sin

ce my first viewing of Girlfight (2000), though I haven’t enjoyed much of her work in the more recent films (Fast & Furious (2009)) and I often wish she would think wisely about her choice in films she’d act in (Uwe Boll's BloodRayne (2005) the biggest disappointment for me) but we get a glimmer of that tough-girl performance that won over audiences years ago with her newest film Avatar! Though it’s not her best, it’s at least on par with her more better work which I’m more than satisfied with. Giovanni Ribisi give a pretty reasonable performance that I found very entertaining, and it’s especially nice to see him in a major film such as this again (everyone remember when he was a new up and coming actor? What the heck happened, man?). Joel Moore did impressively well, which is saying a lot from me, because I’ve always thought of him as one of those actors people consider a guilty pleasure, you can’t stand him in the roles he play, yet you can’t stop watching for the sake of curiosity.

Final Say: Avatar was an experience for the decade no doubt, it‘s one of those rare films that come along that you don‘t watch, you live it!, and after fully examining the film over in my mind I’ve come to the conclusion that such a film as grand as this would not be possible ten years ago, and had it been made earlier the film would have been an utter disaster! I’m glad James Cameron waited all these years for the technology to catch up in the film industry before making it, it certainly was well worth the wait and money, and hopefully we won’t have to wait another 12 years to see a sequel. I highly recommend it!