Kirsten Vangsness of Criminal Minds makes an appearance on episode 2 of Vampire Mob, a crime-comedy vampire web series about a vampire hitman who’s stuck with his mother-in-law living with his wife and him for eternity. Vangness plays Laura, one of the daughters of the mother-in-law (played by The Simpsons Marcia Wallace).

In this episode entitled, “You Can’t Choose Your Family”, the most recent episode of the series that can now be viewed only at VampireMob.com, things get heated as the debate of what to do with mom arises. 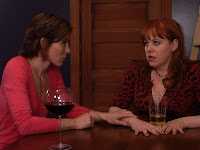 There isn’t a vicious or tragic story behind the family’s vampirism. Hitman vampire, Don, simply turned his wife even though he never planned to because ”he got hungry”. He didn’t turn himself for power, strength, or immortality, but mostly just because it suited his nocturnal life style and made it a bit easier to do his work. The immortal strength certainly didn’t hurt when every day used to be a life or death situation for him. Things got a bit more complicated when Don’s wife decided to turn her sick, dying mother; unable to watch life drain from her.
Vampire Mob has a different way of releasing its webisodes; it’s based on audience views. The next webisode is only available when the previous one gets 5,000 viewers or more. This is how the rest of the initial 6 episodes will be released through VampireMob.com. Updates to let viewers know when the next episode has premiered are available through Twitter And Facebook .
Posted by Kelsey Zukowski at 10:09 AM