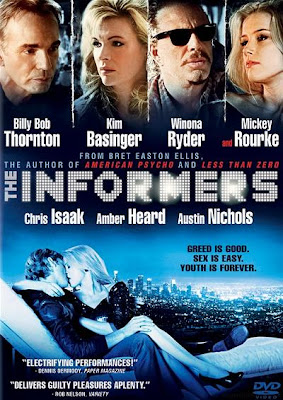 The Story is about: Set in the early 1980's Los Angeles, The Informers is a multi-strand narrative centered on an array of characters who represent both the top of the heap and the bottom of the lower class. Connecting the intertwining strands are a group of beautiful, blonde young men and women who sleep all day and party all night, doing drugs -- and one another --with abandon, never realizing that they are dancing on the edge of their own humanity.

My Thoughts: When looking back at the 1980’s, there’s a lot of eventful things that happened in this particular decade, to recall just a few things from this whacked out decade (aside from my being born into the world), there was the death of beloved rock and roll icon, John Lennon, the rise of contemporary 80‘s rock, big hairdos and embarrassingly hip clothes that made you too cool for school and ridiculously huge jewelry. There was also the fear of a cold war that felt like was never going to end, and the assassination attempt on a US president’s life, and of course the rising dangers of Aids. Yes folks, the 80’s was certainly a time out of the norm for all who remember it (or don‘t due to a LOT of experimenting) it was a decade that change our society forever, and while some say the 70’s was the last innocent time, the 80’s was era of denial because it was better to pretend your problems away rather than face them head on. 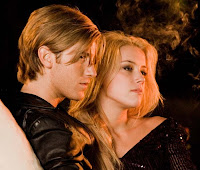 of a fan of Author/Screenplay writer Bret Easton Ellis since I first saw the film American Psycho (2000) when it was first released about a decade ago. Ellis, the man who’s written such acclaimed classics as Less Than Zero, The Rules of Attraction, American Psycho, The Informers, Glamorama, and Lunar Park, is widely known for writing violently disturbing novels and short stories. while it’s largely debatable among his fans and his most out spoken critics over which of his books are the best or worst in the bunch, it’s clear though that it’s been quite difficult for him over the years in the transference from literary writing to big screen adoption on almost all of his works over the years. And though I’ve never really read his books or followed his writing as closely as some of his dedicated fan base, I’ve grown quite found of his literary works over the years and I’ve keeping an eye out for his work adapted to film, so believe me when I say I’ve been longing to check out his latest book to be adapted to film The Informers since I first heard of it awhile back. The only question now that remains is, does his latest adaptation live up to the source material or does it follow suit with the previous film’s hit or miss curse? The film sadly follows it’s predecessors in the vain sense that the film’s plot doesn’t fully follow through consistently enough to capture it’s viewing audience, nor does it manage deliver it’s message clearly enough to it’s viewers to make it’s point, what we see is what we get with The Informers, and unfortunately what we see is a film with a fantastically authentic setting with much promise going for itself but not enough substance to go on to live up to said promise.

The stellar ensemble cast was spot on but sadly far from being perfect. The setting

however couldn’t have worked better than this, there are times when you could easily get fooled into believing that the film was actually made in the 80‘s if it weren’t for the easily noticeable modern day cast starring in it. Everything about this film screamed winner in my opinion except for the thing that mattered the most, which was it’s plot, I mean it had everything else going for it, it had a decent enough cast, outstanding pacing, it was exotic and sexy, oh was it sexy alright! But at the end of the day what you want is to be told a really good story with an adequate ending, maybe not a Hollywood generic style ending where the good guys win and the bad guys get what they deserve, but an ending none the less. Sadly we’re robbed of the ending a film like this deserves, we’re giving a film that just ends, it doesn’t give you an ending, though it builds up to what would have been a great ending, but just ends right there in the thick of it all just like that… I understand that Ellis’s books normally does that sort of thing to a degree and the films their based on do just that as well (American Psycho (2000) and The Rules of Attraction (2002)) but unlike those, the book the film is based on would have made more sense if they included more of it’s source material (mind you that part of the original did include Vampires and a supernatural setting) never the less The Informers feels like the lesser out of the bunch and a hug disappointment for me especially since Ellis himself took part in writing the adaptation. I therefore cannot respectfully recommend this film to even the most hardcore fans of the book without feeling a tad bit ashamed of myself.

As for the acting: despite the film’s plot not working out as well as I’d have l

iked, the cast was a great selection with the exception of a few bad apples. Jon Foster did incredibly well in his performance which will have viewers empathizing over the tough decision his character will have to make at the end to move on in life, and I feel he did it quite will in delivering this in the film. Whoever came up with the ideal of casting Kim Basinger, Winona Ryder, Mickey Rourke and Billy Bob Thornton in this film was a genus as they all fit wonderfully in the era the film takes place in, Basinger looks almost as good as she did back in the 80’s, it’s sad that her performance on the other hand was lagging a great deal. Ryder and Thornton’s presence in the film works effectively and is notable, but does comes up quite sort in the delivery towards the end. Rourke was a nice pick to play one of the film’s antagonists, because no matter how you want to put it, you’ll just hate him deeply in this film, his performance was in my opinion superb! Though I wish his character was giving more development as there was none. Amber Heard was okay but… look I’m as much of a red-blooded male as the next guy who appreciates the lovely female physique, but there is such a thing as too much eye candy if you know what I mean (If you’re a guy you‘ll probably won‘t, trust me it pains me to say it! [Laughs]) but her chance at letting her potential shine was clouded by the overuse of her ‘other’ talents which believe me was such a disappointment. And lastly, actor Brad Renfro was a great actor who’s life and career was both cut short before it’s time, it was a tragedy indeed, what is even more so a tragedy was the fact this film will be very last film with him in it, not only was his performance lacking a great deal, there was just nothing for the viewer to relate to, plus his character seemed way to single layered. He was a good actor with the potential to hit it big, but never quite perfected his acting technique. It’s a sham that a life and career had to end on such a low note.

Final Say: The Informers was an interesting yet highly disappointing follow up to Bret Easton Ellis’s previous adaptations, do I hold him accountable for this disappointment? No, because in my opinion the fault was not his to have in the first place, as many who’ve read his books would know, his stories can sometimes be quite difficult to present in a live action format due to the difference of opinion over the controversially overzealous statements his books often at time present to it’s targeted audience, and as the saying goes, what works for me may not entirely work for the other guy. And just like that, The Informers was a hit on re-creating a stellar 80’s setting that worked incredibly well, but missed on a plot that had the opportunity to develop into something great and failed. Watch at your own risk!

Copyright 2010 TCWreviews.com
All Rights Reserved
Posted by Clifford Kiyabu at 6:22 AM