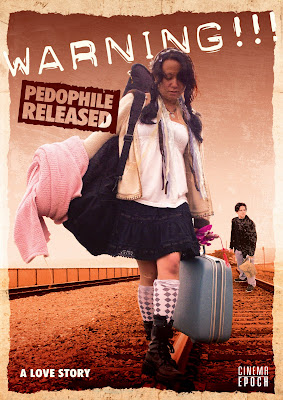 Plot: Warning!!! Pedophile Released, follows Echo (Kai Lanette) a young woman who’s life is thrown down a spiraling path of unfortunate events after 19 year old Malachi (Shane Ryan) is sentence to 6 years in prison for allegedly molesting her at a younger age.

The Story is about: A pedophile is released out of prison from a 6-year sentence after allegedly molesting a 12-year old girl. The victim, now 18, reunites with her assailant whom she calls her "soul mate" only to spark outrage in the community. Not only do they attack the Pedophile, but soon cause more harm and chaos to the girl that they supposedly were protecting.

My Thoughts: It’s known by those close to me that I’m a strong advocate for tougher law enforcement over sex crimes and harsher punishment on offenders, personally if it were up to me, I’d lock them all up and never let them see the light of day for such crimes against humanity. But that’s just my opinion, and while I may express this there are those who’ll think otherwise. Though aside from having strong feelings against sexual deviants, I do however feel that the wrongfully accused should have a second chance to prove their innocents and liberate themselves of charring the burden of a crime they did not commit.

edophile Released, I instantly had mixed feelings over it, because while the film critic inside me was curious enough to see how the filmmaker would attempt to capture the intensity of such a wickedly heinous act in a manner which would remain tasteful enough to be viewed by audiences. The humanity within me cringed at the very idea of watching it. As you already know it’s topic of choice is something I’d rather not get into, because it would be the equivalence of animal rights activist being invited over to Michael Vick‘s house for a BBQ, it simply won‘t end well. So after taking a leap of faith on my part, I jumped right into viewing this film, and I must say I was rather shocked, surprised, and very disappointed. First off, I was shocked at the course his film took from the get-go, which chronicles the teenage years of Echo (Kai Lanette) a young girl who’s been thrown out on the streets at age 15 after her father discovers a pregnancy test strip in the trash, her father’s decision comes about after having to deal with the resulting stress he and his wife endured after their daughter made-out with 19 Malachi (Shane Ryan) at age 12, which lead to Malachi being charged as a pedophile and incarcerated for 6 years in prison.

The Sex Offender", each focusing on a specific time in Echo’s life. The first segment, FEMALE, AGE - 15 focuses on Echo at age 15, after enduring a horrific gang rape by three unknown assailants she’s kicked out of her parents home because her father cannot take the overwhelming stress of having to deal with anymore drama that arose from the prior incident. FEMALE, AGE - 15 gives the viewer an interesting insight of the pressures young girls like Echo go through when such incidents occur, which is feeling partly at fault for the crime when such guilt was never their’s to bear. However aside from a few quick flashbacks of the questioning and accusations of her and Malachi by the authorities. The first segment doesn‘t offer much quite frankly, other than an incoherent start that sadly only becomes more incoherent as the viewer journeys further down the rabbit hole. The second segment, LITTLE GIRL GONE BAD, follows Echo after the events of being kicked out on the street by her father, though it doesn’t very much specify how much time have passed from the first segment and the second, it’s assumed that Echo is much older since the character is dressed in a more provocative tone and appears to have taken living on the streets much more easily. Sadly though, like the first act, the second act doesn’t really bring anything much to the table other than a repetitive routine that’s long overstayed it welcome during the first act. The third and final act, THE SEX OFFENDER, serves much of the film’s dialog, which believe me isn’t much. The main problem with the film is the disappointing lack of dialog, I understand that the director was trying to tell a story through emotion, but in case and point, emotion isn’t enough to advance a story onwards. However I admit that the film does have it’s qualities, the musical score is unbelievably remarkable, each track works spot on with the scene it’s presented in. The cinematography was very original in the sense that it’s a combinational style I have never seen on screen before. Sadly though the lackluster in dialogue killed it for me in the end because the film lost it’s sense of direction with the lack therefore of it.

As for the acting: well what can I say, the performance of these a

ctors were both a hit and miss. It seems that when none of them are speaking on screen we get a reasonable performance, however the moment someone opens their mouth all bets are off, but luckily for the actors, there’s barely any dialog to begin with. Kai Lanette was okaying in her performance as ,Echo, though I’d hardly consider her performance in the first act passable playing a teenager. Where some actors and actresses have that natural presence about them which makes them possible in portraying an age younger than they are in real life, Lanette on the other hand left me unconvinced as she obviously lacked that ability from the get-go. Though she did redeem herself in the second and third act, with a more mature look to the character which worked organically authentic towards the actress’s real age, however, her delivery in what little dialogue the film had quickly botched whatever chances she had at a spot on performance. Shane Ryan is without a doubt one of the most peculiar filmmakers I’ve come across in a quite awhile, sadly however an actor he is not. His performance in the role of ,MalachI, was painfully delivered. I’ve tried real hard to take his character seriously, but I found it overwhelmingly impossible to do just that when his performance was laughably unconvincing. I’ve got nothing against actress Molly Wryn, she had a small role in the 1984 Sci-Fi action epic DUNE, and well… that’s about it really, but I’ve got nothing against her acting personally, my only problem though, is that I wasn’t really feeling her performance, her delivery seemed too dry and way too two dimensional. Rob Dale’s performance surprisingly wasn’t as bad as I’d expect coming from a first timer (Yes I looked him up on IMDB). Elina Madison, Joanna Angel, and Sean Cain’s performance’s were… hard to judge really, I mean the only real scene in the whole movie where we’re able to see these three actors show off their acting talents, and instead we get a scene which was completely uncalled for, it makes absolutely zero sense to the film’s advancement. More than half of the dialogue doesn’t make all that much of sense, nor does the scene contribute to anything but simple eye candy by none other than miss Angel herself for the male viewers, other than that it just wasn’t called for if you ask me.

Final Say: Warning!!! Pedophile Released, surprisingly didn’t quite turn out to be the film I had originally expected, however it also did not become the film I’d have liked. It was an idea which had it‘s own unique atmosphere that presented much promise, but the execution was horribly handled, thus giving us an unsatisfying finished product. It had it’s chances to become a ground breaking cinematic piece of art but ended up becoming sub-par film with nothing to show for itself other than a decent soundtrack and an interesting take of cinematography. I cannot recommend this film as it is not deserving. Watch at your own risk!

Copyright 2010 TCWreviews.com
All Rights Reserved
Posted by Clifford Kiyabu at 5:07 AM