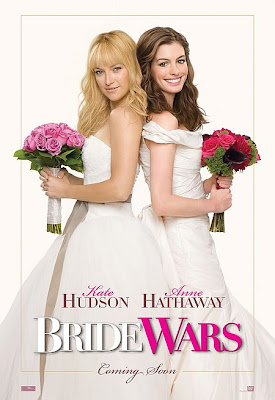 All girls look forward to their wedding day. All guys, especially the ones dating the strongly religious ones, look forward to after the reception. And then after their wedding, it goes downhill from there. The wife starts popping out kids at the rate of sound, and the man start getting gray hairs from being around her. The dreams of happiness are shattered like that, and they have no one to blame but themselves.

Now imagine being stuck in a fucking movie like “Bride Wars,” with no way of getting out until the movie ends.

“Bride Wars” is the newest romantic-comedy (and I use that term loosely) by hack director Gary Winick, starring Anne Hathaway and Kate Hudson for no selling point except to see them in a thirty second catfight. Winick, who has directed his fair share of crappy romantic comedies in the past, already has a contender for one of the worst films of the year by making a romantic comedy that has little romance and no laughs. I couldn’t recommend “Bride Wars” to anyone… except for those few pervs that would pay ten dollars to jerk off in a movie theater at Hathaway and Hudson, and I’m sure someone has already done that.

But let’s not think about some guy shooting a load in the guy’s hair seated in front of him. Let’s talk about a more harmful product than a sticky substance – let’s talk about “Bride Wars.” Now what the fuck can we say?

Well Liv and Emma (Kate Hudson and Anne Hathaway, respectively) have dreamed of getting married at the Plaza in New York since they were in their pre-teen years. Now that the time has come that their boyfriends have now proposed to them (Hudson’s boyfriend played by Steve Howey and Hathaway’s played by Chris Pratt), they can finally go see a wedding planner (Candice Bergan, who is also the narrator of this movie) to schedule their days. The weddings are about two to three weeks apart from each other, and everything is working out perfectly… until the damn wedding planner fucks up the dates.

Needless to say, if you’ve seen the trailer, you know the rest of the story: they stop talking to each other for weeks at a time, talk to their friends about each other behind the other’s back, dye each other’s hair different colors, and have it out at parties. Without showing what it would take to even have a wedding at the Plaza, such as the cost of everything and what the preparations would be and whether the grooms agree with everything, the script allows us to watch just about everything else that has nothing to do with the wedding – from Kate Hudson getting fat off of chocolates and picking out pieces of her hair off of her head to Anne Hathaway being bossed around by the manly Kristen Johnson.

But not everything can be blamed on the horrendous script; some of it has to go towards director Gary Winick. While I think guys should be the ones directing romantic comedies (because from what we’ve seen with “Forgetting Sarah Marshall” and “Zack and Miri Make a Porno,” guys do it best), I think guys should make a romantic comedy that would appeal to both guys and girls. Gary Winick has created a romantic comedy that won’t appeal to neither. I saw just as many ladies walking out of the theater as I did guys shaking their heads, saying, “Okay, so we SHOULD’VE seen Clint Eastwood.” After the movie ended I came to the conclusion how much we need Woody Allen.

My face remained expressionless throughout the whole movie. So did Kate Hudson’s. Coincidence? She plays a big-time lawyer working on this big-time case. She has the mouth of Juno McGuff and the attitude of Lil Kim. Her little subplot of this big case doesn’t go anywhere. After Hathaway keeps sending boxes of chocolates to her office, claiming to be her fiancé, she piles up on the weight. I guess obesity is the new form of comedy nowadays. Now I look forward to “Paul Blart: Mall Cop” even more…

But Kate Hudson isn’t a big deal. I knew what I was getting into with her right from the beginning. She was in “Fool’s Gold” and “My Best Friend’s Girl,” after all. The biggest disappointment, however, comes from Anne Hathaway. Right when you think that she has finally picked the right movie in her career garner attention to herself (that being “Rachel Getting Married”), she pulls an Eddie Murphy and stars in her own version of “Norbit.” She isn’t believable at all in this role. I believed her as a princess in “The Princess Diaries.” And I believed her as a spy in “Get Smart.” They were two fictional roles. But when she get to a role that is pretty realistic like this one (outside of the whole fighting between the two girls), Hathaway plays a normal everyday girl like this was her first role.

And it’s because of this movie that she won’t get any recognition for “Rachel Getting Married.”

It’s been said that the first movie of the year is usually the one to point which direction film will be heading to this year. If the film is “Bride Wars,” I’m worried we will have another 2008 on our hands. Not only did 2009 begin with a zero-star film, but it doesn’t look to get any better. Girls won’t like this movie, their limped-dick boyfriends will be sleeping, and ten bucks will go towards Gary Winick’s yacht.
Posted by TonyD at 8:44 AM