Review: In the Name of the King: A Dungeon Siege Tale (2008) [Reviewed By Clifford Kiyabu] 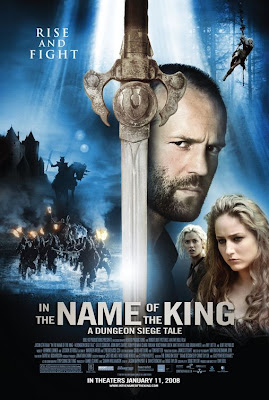 Plot: a once simple family man named Farmer sets out to find his kidnapped wife, Solana, and avenge the death of his son, who was killed by animal warriors called Krugs.

My Thoughts: Director Uwe Boll is a man known for many things, he speaks his mind rather you’ll like it or not, he’s a man who’ll do whatever he wants despite the disapproval of the masses, he’ll defend what he does with two simple words “F*** off” fallowed by a very aggressive hand gesture, he is also one heck of a boxer, anyone who’s seen the internet hit boxing match between him and a handful of movie critics getting beat down know he is not a man to screw around with, He’ll knock you down faster than you can say “HUH?” And leave you wishing you’d never spare with the man, which I will say is something to admire about the man, because how many people talk the talk but never truly walk the walk especially in a place like Hollywood, being who he is and not giving a flying f*** on what people think of him is impressive I will say.

However of all the things he is, a good filmmaker is not one of

them, but I wouldn’t dare say that to his face of course because the last thing I’d want is to piss off someone who has an edge over me (Remember boys and girls; your friendly neighborhood CW is a lover and a writer not a fighter), so angering him would be like putting an 8 year old up against Mike Tyson, it’s just simply not going to end well, well for the 8 year old that is (which of course would be me in this case). In the film industry he’s known as the maker of video game movies because the majority of his portfolio consists mainly on, well, video game films. Which are loosely based on the games they are made from, and they are always poorly budgeted and poorly directed and edited (most of the time), with probably no effort to make it how it originally was intended to be, but according to Mr. Boll it is “A work of “F***ing Genius”, because according to him he is “The Only Genius in the business” thing is; he is a genius I won’t deny that, but the only genius? No. what he lacks however is creativity and a filmmaker without creativity is no filmmaker indeed. His main problem is instead of trying to make it as how it should be; he makes the film how he wants it to be and disregards what the fans wanted, now I’m not saying that a good filmmaker does whatever the fans demand, no, but should the fans at least get their money’s worth since they are paying for it, and especially when you have a particular project set with one type of fan base. Isn’t it wise to please that fan base instead of taking what they love and crap all over it? Thing is I’ve always believed the whole point of making film adaptation of a Novel, Comic, or Video game into a movie was to satisfy the audience that appreciated the story back when it was still in its original format. But apparently Mr. Boll and I don’t share the same beliefs or the same compassion appreciating the people who made it something. Now over the years I have seen just about all of Uwe Boll’s films, yes even though I dislike his style of filmmaking I still watched them and will continue to watch every new film he makes, why you may ask.

beginning to end. I feel that you shouldn’t criticize a filmmaker unless you’ve seen his/hers work, and what kind of film critic would I be if I just spoke ill about the man and his work if I’d never see anything he’d made? I wouldn’t dare call myself a film critic if I did something as awful as that. So with that I view his films; and let me tell you, till this day his most worst film made remains to be none other than House of the Dead, but it does seem that over the years his films have gotten somewhat a little better, now I’m not saying better as in it’s worth checking out, I’m simply implying that over the years his work has gotten a little less crappy, but still remains full in shit. Like with In the Name of the King: A Dungeon Siege Tale, the film is somewhat okay if you’re a fan of fantasy films and know nothing of the game it’s based off of.

But it is way off from what the fans would have wanted. What Director Uwe Boll basically did 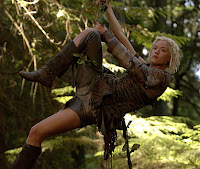 with this film was defecate all over what the fans loved about the game then poured lighter fluid onto it, lit it on fire and laugh in their faces while he puts out the fire with his urine essentially destroying the very last bit of dignity it had. the plot doesn’t really hold strong and rips off on the very concept of the LOTRS trilogy within a two hours and seven minute runtime, and to make things even more so agonizing is the fact the film has little back story for the individual characters from the get go, we know little of any of the main players but must still go along as if we’d supposed to already know who they are and what their place is in the film, the other excruciating thing is the fact that the film is only two hours and seven minutes long, with a film in a genre such as this the film is both rushed and moves way too slow at the same time, how is this possible you might ask, well I will gladly explain it to you, see the film is made to be an epic tale, or as I like to call it Uwe Boll’s “LOTRS epic tale” and as painful as it is for me to say it, it is indeed on some level an epic tale. Problem is the timeline moves way too fast in many parts of the film that one often can get lost, especially during certain scenes involving battles sequences, and then on other parts the film moves slower than it should and actually feels like it over stepped its boundaries on several occasions. And the ending, which don’t get me started on how rushed it was, it felt as though they just wanted the ending to come and be done with as soon as possible, because there just wasn’t any emotion to it, there was no power behind the ending like an epic tale should have overall I just couldn’t get into this no matter how much I tried..

The story is about an unspeakably evil army rampages across what was an idyllic, peaceful world, destroying everything in its path, looking to conquer the mighty Castle Ebb and vanquish the King himself! Amidst this backdrop of war in the Kingdom of Ehb, between the evil Gallian and the ruling King Konreid, a once simple family man named Farmer sets out to find his kidnapped wife, Solana, and avenge the death of his son, who was killed by animal warriors called Krugs.

As for the acting; you’d think with an all-star cast like the one he picked you get at least

something worth your wild, but you don’t get to have your cake and eat it, then again, you don’t even get your cake [Laughs] problem wrong is everyone pretty much phones in their performances with no effort to give a damn, you could say that everyone was ether in need for the cash or Uwe Boll had some kind of voodoo magic over them, I will admit though the special effects were pretty damn good, but what’s special effects good for if there’s no creativity or originality behind it. But of course I will say a few things. One being the fact that Jason Statham was well… Jason Statham, is it me or is he acting exactly the same way in every single film? It’s starting to look like the only character he knows how to portray is that of himself. Leelee Sobieski was a letdown, she started out as a fantastic up and coming actress who was going to be great until she to a break from acting, and now it seems like the woman who came back is not that up and coming actress I once saw, instead she gives a lackluster of a performance which looks phoned in half the time while the other half is so dead that you’d get more excitement out of standing in line at the DMV. John Rhys-Davies is a terrific actor, he’s great at acting, has a magnificent personality, and always seems to pick good projects to work in, however his choice was way off, not only did he pick a bad film to act in but his performance came out rather dry compared to his previous films, but I blame Mr. boll for this of course. Burt Reynolds who I’ve always enjoyed watching for years was disappointing, it seriously did not match for this film one bit. Ray Liotta, much like Reynolds, was out of place in this film and I often wondered why he was casted for this film. Ron Perlman is yet another who sadly does not fit in this flick at all; he was way out of place throughout his performance. Claire Forlani was once a favorite of mine, back when she acted in films that were bearable and her acting was actually good, now days it seems like she not even trying to act anymore. Kristanna Loken was once an up and coming actress who had A-lister written all over her after she starred in Terminator 3, however it seems after she starred in another film made by Uwe Boll (BloodRayne) she dropped down to the C-list faster than you could blink, she soon became yesterdays news. Her performance is very much weak; she always seems to have this same expression on her face that carries into all her films. That expression is one that resembles someone who is at a party and doesn’t know anyone there, after awhile you wonder to yourself who invited her and why she still remains. Whoever told actor Matthew Lillard that he could act was seriously lying. Not only can he not act, but he is embarrassing to watch.

Final Say: after giving this film viewing I’ve noticed that Director Uwe Boll has gotten a little better over the years and his film do seem to be a little less annoying to watch, however they still remain like chore to those who are viewing. I cannot recommend this to anyone as I see no point in ever wanting to see this film, but know that if he keeps up with bettering his directing style he may one day prove my and others like me wrong, until than his films still remain awfully bad. Watch at your own risk.

Copyright 2009 TCWreviews.com
All Rights Reserved
Posted by Clifford Kiyabu at 1:17 AM