GHOST RIDER 2 Back On? 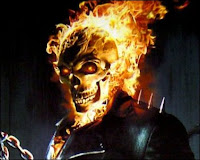 It appears some things just won’t disappear in this business, bad directors, lousy actors, and now, Ghost Rider. the good people over at Bloody Disgusting is reporting that Sony/Columbia is officially moving forward with a sequel to the comic book adapted GHOST RIDER in which Nicolas Cage starred as the skull burning bounty hunter for the Devil, Johnny Blaze. From what they’ve said the studio is currently looking for writers to write a new script for the sequel, Nicolas Cage is said to be already on board to reprise his role. Also another rumor circling around is that they are also looking into who will be the next major villain to face off against the Rider.

On a personal note; I didn’t care too much for the first film because it wasn’t dark enough, I being a hug fan of the comic was left unsatisfied with the finishing product of the first film, however if things turn out good, and this film is better the first movie than I will withhold my judgment on this film and give its sequel a chance.

More to come on GHOST RIDER 2 and more as we hear it.

Posted by Clifford Kiyabu at 5:27 PM