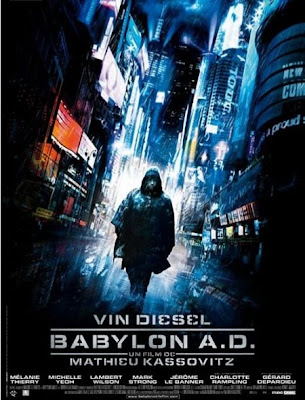 Plot: Veteran-turned-mercenary Toorop takes the high-risk job of escorting a woman from Russia to America. Little does he know that she is host to an organism that a cult wants to harvest in order to produce a genetically modified Messiah

My Thoughts: As a person of faith I knew all too well what this film’s message was trying to say, and even though I still fairly enjoyed it because what it did say was in this world humanity is vastly divided into a great deal of different demographics, from the faithful to the faithless. We have people dying in the name of god/gods everyday to those just trying to survive the chaos that life holds for us all. Overall it’s a dog eat dog world, and practically everyone is to some extent trying to f*** over the next guy. Yes it’s a harsh world people, and the faster we know and understand it the faster we can survive it.

Based off the novel “Babylon Babies” written by French-born

Canadian writer Maurice G. Dantec. Babylon A.D. is a film that takes us deep into a near-future that is clouded with destruction and death running ramped throughout the world with greed and lust leading the charge of chaos. Though I will admit I have never read any of the books this film is based off of I therefore can’t make a comparison between the books to the film but rather review the film as a standalone. The film was called one of the biggest bombs of 2008, with a lackluster performance in the box office and for receiving a bad reception by movie critics everywhere. I as a critic took a pass on this while it was in theaters due to the bad reputation it had received. However I still decided to give it a chance when realest on DVD because of the oath I took when I became a critic (Not a real oath as a critic but rather a personal promise I made to myself) that no matter how bad a film is said to be and or how lousy of a box office gross I will still see it from start to finish before judging it. So despite the incredibly bad reception (even the theater employees told me it was bad) I waited silently for some months before opening my mouth with an opinion. And I must say; yes book based films are and never will be anywhere nearly as exhilarating as the book, you name any film made to date that is in some way based off a book and I’ll tell you the book is still by far batter due to having more free space on what you want done and how events can turn for the better or worse with no worries of having a bog brother studio breathing down your neck wanting to change everything you’ve work so hard to put together.

exaggerated with how bad the film was. I personally liked it quite a bit and had fun watching it. Sure it didn’t quite live up to the hype that surrounded it prior to its release, but what film doesn’t live up to the latter of its novel? But still I do however agree the film could have been a lot better then what the final product turned out to be and quite frankly I don’t blame the director for the film lacking in storytelling or the way it was pieced together, because after all he was blocked at every corner by the film studio for the get go. And therefore was not his fault. How many times do we see good films turned bad at the hands of the bigwig executives? (Especially those at Fox studios). But aside from that, the plot is still somewhat decent, the pacing goes quite nicely and the action is very much enjoyable. The FX is fantastically done along with some really good acting. And because I viewed the “Unrated” version you could say that is why I liked it a little more than some, also on the DVD the films come with a animated prequel that isn’t much, heck even the animation isn’t all that great, it’s more like moving stick figures than actually animation, but it does in fact serve to give it’s viewer a little more insight in the world of Babylon A.D. and it’s main plot, it proves to be more helpful than actually a pain. Like I’ve said earlier, this did not live up to it fullest, however it was not at all as bad as many has described it to be. I would recommend this if you’re in the mood to kill an hour half of time with someone you know.

The movie is about; it is the not-too-distant future. Thousands of satellites scan, observe and

monitor our every move. Much of the planet is a war zone; the rest, a collection of wretched way stations, teeming megalopolises, and vast wastelands punctuated by areas left radioactive from nuclear meltdowns. It is a world made for hardened warriors, one of whom, a mercenary known only as Toorop (Vin Diesel), and lives by a simple survivor's code: kill or be killed. His latest assignment has him smuggling a young woman named Aurora (Mélanie Thierry) from a convent in Kazakhstan to New York City. Toorop, his new young charge Aurora and Aurora's guardian Sister Rebeka (Michelle Yeoh) embark on a 6,000 mile journey that takes them from Eastern Europe, through a refugee camp in "New Russia," across the Bering Strait in a pilfered submarine, then through the frozen tundra of Alaska and Canada, and finally to New York. Facing obstacles at every turn, Toorop, the killer for hire, is tested like never before, in ways he could never have imagined--as he comes to understand that he is the custodian of the only hope for the future of mankind. For the first time in his life, Toorop has to make a choice: to make a difference or walk away and save himself. Too bad it came on the day he died.

As for the acting; this was said to be Vin Diesel’s come back film, but instead turned out to be

yet another lackluster by the stare. Which is sad because I actually liked his acting, and after being missed from the mainstream spotlight for quite some time. Babylon A.D. was supposed to have been his big break back into the big leagues, but now proved to be yet another sad attempt, he was supposed to be the Schwarzenegger or the Stallone of this generation but more and more he’s starting to look like this generation’s Jean-Claude Van Damme, which believe me is not something to be proud of. Still he’s acting has proven to be adequate and therefore has my approval. Michelle Yeoh is an incredible actress, I loved her performance in “Sunshine”, but she just wasn’t doing it for me in this one, it really seemed like she was just phoning in her performance and not trying hard enough. Nothing against her personally but she should have done a better job than this. Mélanie Thierry was great, though I found her to be a little annoying at times, I really enjoyed her performance. I can’t say I’ve any of her previous work, but after watching this it makes me want to look into other films she starred in. Gérard Depardieu is a fantastic actor, and I’ve liked just about everything he’s starred in (except for a few films of course)but I felt he wasn’t really there is the film, it’s was more like he was doing this for the money rather than for the art of acting. Charlotte Rampling is another magnificent actress, who I personally enjoyed her performance in films like “Swimming Pool” and in last year’s “The Duchess”, but I really do feel that her presence in this film was really underused, for someone who is supposed to be the main villain she is only in about ten maybe fifteen minutes of the film, and that’s towards the end of the film mine you. So I really was disappointed with the fact a great actress like herself is thrown in the back of the film when she should have been up front and center of this film.

Final Say: What can I say that hasn’t already been said, Babylon A.D. is a fairly enjoyable film for me, though it had its faults, and many they were, I really have to say the downplay rep this film got in theaters was highly over exaggerated. Though I did not see its theatrical version but rather its unrated version on DVD I still could be wrong about the theatrical cut. However don’t avoid this film because of the bad rep, see it for yourself and then make your judgments about it. I recommend it.
Copyright 2009 TCWreviews.com
All Rights Reserved
Posted by Clifford Kiyabu at 6:13 PM