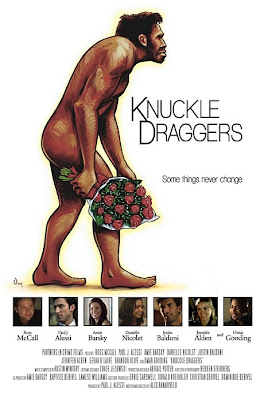 Plot: After the girl of his dreams dumps him, a nice guy (Ethan) recruits his misogynist brother (Kyle) to help him win her back.

The story is about: "Knuckle Draggers" takes a realistic, but comic look at how the behaviors of men and women have evolved very little since the caveman times. When Ethan, the needy nice guy, is dumped by his fiancée, he asks his misogynist older brother Kyle to help him win her back. Kyle tries to teach Ethan how to act like "a real man" and to never put a woman on a pedestal. Repulsed by his brother's harsh views on how to treat women, Ethan ignores his advice and ventures out into the dating world, where he slowly realizes that everything Kyle says seems to be true.

My Thoughts: What makes a man a man? Is it measured in his self confidence, his successes, his tough and arrogant nature, or is a man's true worth of being attractive to the opposite sex measured in his inner sensitivity? Whatever the answer may be, the one that most men look to is: what do women really want in a man? The answer isn’t as simple as men would hope, nor is it any easier the other way around for their female counterpart which is what really divide men and women into being opposites, men want apples and women want oranges simple as that, right? WRONG! nothing is ever that simple when swimming through these waters, but as the saying goes, ‘opposites attract!’

ntly dived into a fantastic film called Knuckle Draggers, a delightful romantic comedy that digs deep into the relationship problems from a man’s perspective. From nasty break ups to the lost of that spark in a relationship, the film doesn’t hold back on the issues and in fact brings some very valid points to the table that will have people thinking: with everything we human beings have achieved, have we yet to evolve from our primal selves? The answer is no (I just know I’m going to have a lot of people angry at me for what I’m about to say next) because what the film clearly points out which does make a lot of sense when you think about it is that: men and women still carry the very mentality of the “caveman”, most (not all) women want the perfect mate to spend their lives with but tend to settle for the lesser of the pack and go beneath their standards for the un-evolved male all for the sake of security and safety, while men may want the perfect intellectual mate that will not only pervade for their offspring but also remain a free thinking individual, will often at times settle for the most basic and sometimes degrading of choices, physical attraction over intellect (Because let’s face it, not all men think with their heads, or at least not the head you have in mind). This of course can easily be summed up to the fact that the dating scene hasn’t really changed since the days of fire and brimstone, and because of this we are brought up with a mentality of fallowing what our primal instincts are telling us to do and not what are hearts are saying. The film shows a lovely take from both sides of the sexes that are entertaining on an equally enjoyable level.

The best way to explain this however is to point out the main character of the film,

Ethan (played by Ross McCall) a down to earth guy who strives to become successful at what he loves which is directing films, he hops to make something of himself in the LA scene so that he can provide for the woman he loves, however his pure unconditional love towards her may not be a mutual feeling she shares for him and thus not being enough a man to hold on to her as his one and only. And eventually leaves him for not wanting to give up his dreams for a nine to five job, after his break up he is deeply heartbroken and feeling out luck, and it’s up to his though as nails misogynistic brother, Kyle (Played by Paul J. Alessi) and his close friends Patricia, Russell, and Renee (Played by Amie Barsky, Omar Gooding, and Danielle Nicolet) to help and support him through this ordeal. While his friends assure him he’ll meet someone better and more fitting for him, his brother on the other hand convinces him that it’s his own fault for losing his woman because he was weak and not able to be a real man about it. This lead to him seeking guidance from his brother to become the ultimate mans man. However between his brother trying to change him into something new and his friends influencing him to remain being the sweet and sensitive guy he is, Ethan learn a few new things about life as well as a few things about himself in the process and gains the confidence to become the man he was meant to be. The film itself is touching and informative and will have any gathering of friends and family laughing and full of enjoyment because just about anyone can relate to the characters or the situations in this film, I personally feel the film is up lifting to both men and women alike and is to a certain sense inspirational to the very core of our human nature.

e acting: This is where a film normally will get major criticism from me, because the choice in actors or their acting ability can either make a film or in most cases break it. Fortunately for this film, I was very impressed with the overall acting choices because they matched their role quite nicely. Ross McCall was fantastic in the lead role of ‘Ethan’, he gave an authentic performances that was sympathetic and empowering, you couldn’t help but feel for the guy, which clearly shows how well of a performance he gave. Paul J. Alessi was outstanding in the role of ‘Kyle’, he pretty much is the strength behind the film because his character is a testament to being the ultimate man, men around will come to envy him for his arrogant attitude towards life in general in the film because he is not afraid to be himself no matter where he is, and Alessi and McCall’s chemistry works great in the film playing brothers and there are times in the film where you’ll actually believe that these two men are in fact siblings. Amie Barsky who plays the character ‘Patricia’ who is ‘Ethan’s’ female fiend and opposite Alessi’s character in terms of opinions, was fantastic, she gives justice to free thinking women in her performance which I feel was empowering to women everywhere. Omar Gooding was the great in the role of ‘Russell’ and really left an impression on me with his performance, it’s never a dull moment when he’s on screen and he really contributes hard honest dedication to his character and as far as I’m concerned, he has really come out onto his own as an actor. Danielle Nicolet was wonderfully delightful as ‘Renee’, I admit though that when I first saw her acting some years back I was not pleased with her, and my original opinion on her was that she was nothing more than a talentless actress without a chance of hope, however my view on her has dramatically changed after seeing this film, I see now there is in fact hope for her after all, she has made me a fan. Serah D'Laine was really good in the film as McCall’s love interest ‘Erica’, though I can’t fully judge or compare her acting because I haven’t seen any of her other works, I will say that she was very delightful in the film and really does make herself know to the viewers onscreen. Justin Baldoni and Jennifer Alden where equally fantastic in the film and serves as the film’s main antagonists and does so very well in terms of making you love to hate them.

Final Say: Knuckle Draggers was a very enjoyable film. I never thought I would have had so much fun with it, and even left me surprisingly smiling at the end which was a rare thing indeed, for a film that is made on an indie level, I was surprised at how it surpasses the quality of many big budget mainstream films. Knuckle Draggers is defiantly a driving force to be reckoned with. I highly recommend it!

Copyright 2009 TCWreviews.com
All Rights Reserved
Posted by Clifford Kiyabu at 6:29 AM