Review: Transformers: Revenge of The Fallen (2009) [Reviewed By Clifford Kiyabu] 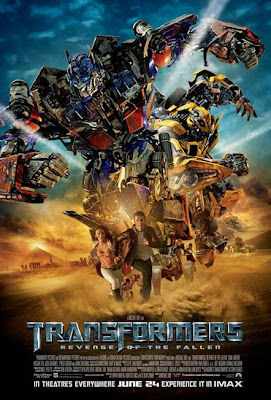 Plot: Decepticon forces return to Earth on a mission to take Sam Witwicky prisoner, after the young hero learns the truth about the ancient origins of the Transformers. Joining the mission to protect humankind is Optimus Prime, who forms an alliance with international armies for a second epic battle.

The story is about: With the help of the Autobots, the soldiers of NEST, and an old adversary-turned-ally, Sam (Shia LaBeouf) and Mikaela (Megan Fox,) must uncover the secret history of the Transformers presence on earth, and the sacrifices that have to be made to save it from an ancient threat sworn on returning here for revenge... an ancient Decepticon named THE FALLEN.

My Thoughts: In 2007 director Michael Bay wowed audiences everywhere with the release of the live action adaption of “Transformers”, a once popular cartoon and toy line produced by Hasbro in the 80’s, I personally was moved by his rendition of the never ending war between the Autobots and Decepticons onto the big screen, and eagerly awaited to see how he could top the action and story in its sequel. Well after a long two year wait the larger than life robots make their return to the big screen with Transformers: Revenge of the Fallen a sequel told on an epic proportion. With bigger robots, bigger action sequences, and the stakes couldn’t have been higher with it being on a more global scale than ever before, but the question remains; with the bigger than ever action scenes in the film and a plot in which the war is spreading out of control globally, does this block buster sequel live up to its predecessor?

The answer is yes… and NO! In the highly-anticipated sequel the

audience is treated with none stop action practically from the beginning, with a larger than ever battle between the Autobots and Decepticon, not to mention we are also introduced with a slew of all new bots from both sides of the battlefield, however all these new additions don’t quite hold up well on the big screen. It should be considered common sense that to make a fairly decent action film one must keep a consent combination flow of story, action, Story action and so forth until the big climatic ending: however Bay seems to invasion a film in which the pace goes as fallowed: Action, story, action, action, action. Now believe me I love a good mindless action flick as much as the next movie buff, but you can’t seriously think that anyone with at least half a brain could possible watch this without feeling like the film is just dragging on way too much with the nonsense action. Honestly, it was just too much explosions and guns and not enough quality. The run time, which I can’t stress enough was too long, with a run time of two and a half plus hours this film had little going for itself and could have easily been cut down a bit without hurting it or had a touch more of filming done and cut into two complete films, because in all honesty it felt as though they were trying to mash every possible idea and scenario for an awesome fight scene that had come to mind into a single film without taking in a thought of what the consequences would be with little (if any) storyline left to be told. From putting in Pretenders to introducing the Insecticons this film had way to much going on while not enough going for itself at the same time, from too many explosions to one too many lame one liner jokes this film kept viewers like myself bored and exhausted long before it struck the midpoint of the film. I admit, that when I first saw the film I was blown away by the most epic of battles throughout the film’s course, however after allowing the film to mole over in my head and came back down to reality I realized that something was gravely missing; that spark of magic that the first film had was no longer there, the magic that made the first TF film work was absent and that I, the moviegoer was cheated out of what could have been one of the greatest sequels since Christopher Nolan’s “The Dark Knight”.

But to be fair, all the blame shouldn’t go directly to Bay alone, as you should know that

director Michael Bay has never been a good storyteller, excellent in cinematography work, yes, and a god in making the most complex action scenes possible on the big screen, but a good storyteller he has never been. He has always relied on other well known filmmakers (Bruckheimer and now the likes of Spielberg) to help him in presenting a fairly decent plot for his films, hence the reason why Steven Spielberg was involved. This is also why the first Transformers film was such a huge success, because without the likes of well known filmmakers behind him, Bay’s films tend to come off as a lesser quality film with mindless action. But this of course is where the film also disappointed me; because where Spielberg is well known for fixing problematic plots into award winners, he failed in a very big way with the sequel and seemed to have allowed the plot holes and logical mistakes that both the writers of the film and Bay failed to notice, this was such a disappointment for me coming from someone like Spielberg, and even though he was only a producer of the film his influence alone could have made this film’s plot work magnificently with something as simple as a few alternate suggestions. Another common mistake Bay has made in this film which previous films of his has dictated to be his Achilles’ heel is that; he doesn’t seem to comprehend the logic of time and distance in his films (Don’t even get me started on the historic mistakes he made on the bombing of pearl harbor) he simply assumes that this little factor can be ignored and that the moviegoer audience will go with it because they don’t know any better, the fact of the matter is that the audience has noticed, and they will not ignore it. nor will they stay quite about it ether, Ultimately I still gave this film a 7 out of 10 which is basically a fairly decent (and to some very generous) rating because though the film’s plot was not as successful or enjoyable as the first film, it’s still considered more or less a guilty pleasure film for me, because let’s face it people: we’re talking about BIG ****ING ROBOTS FIGHTING EACH OTHER HERE! There’s just no other way of putting it that would get a movie buff like myself into watching it again regardless of what my opinion is on the film as a whole.

ting: it’s no lie that I’ve been quite the Shia LaBeouf fan over the years, and one could argue that I have been somewhat bias to every film he’s acted in, and because of this some have gone on to say that as a film critic my criticism could be considered an impartial judgment, well I think it’s safe to say that Revenge of the Fallen has proven that I am no more biased than the Pope is Jewish, though LaBeouf gave an okay performance, it was simply lacking in many areas of the film that could have been done better, and it seemed more like he was just trying to fly through the scene’s with the only motivation in mind is to get it over with, this is certainly not Shia’s shining moment indeed. Megan Fox has been around for quite some time now but has only achieved mainstream stardom as of recently, with her career just blasting off to the big time there’s no doubt in my mind that with her gorgeous looks she’s going to be making marks and breaking hearts along the way, but is she a talented actress? Well to be honest that is up to debate, while I thought her performance in the first TF film was okay, I thought she gave a rather poor performance in the sequel, but this might not be entirely her fault as there was simply not enough stock put into her character’s development in the sequel and instead was seen mainly as eye candy running around the screen for the male majority audience. Josh Duhamel and Tyrese Gibson were fantastic, though I was very disappointed with the fact they received smaller roles this time around, they were one of the main reasons the fist TF film worked so nicely and in the sequel their characters were handled poorly. Why John Turturro was given a bigger role in TF2 I still can’t figure out, I mean nothing personal towards the actor, but his character ‘Agent Simmons’ is what I like to call the Jar Jar Binks of the TF franchise, though I will say Turturro does a much better job this time around, however I stand by my word when I say no matter how much you try to sell it, we ain’t buying, simple as that. I could go on and on about the rest of the cast but that would only make my head hurt!

Final Say: Transformers: Revenge of the Fallen had its moments of glory that would have moviegoers hanging at the edge of their seats in awe from the sheer epic scale of the film’s premise, however it gets old after awhile and the viewer begins to count the remaining time left before the credits start to roll. Though my review may seem as though I hated this film, I admit that there is a part of me that would be willing to revisit the film again someday, perhaps on DVD or something... Anyway I don’t recommend this to be viewed in theaters but rather you wait until it hits the DVD shelves as this is a rental-fair film.

Copyright 2009 TCWreviews.com
All Rights Reserved
Posted by Clifford Kiyabu at 4:18 AM