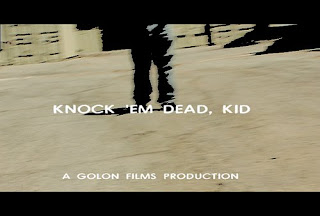 Plot: Bret (Julian) yearns to leave his Connecticut hometown and head off to college. He figures summer will be fun alongside his buddies before leaving in the fall but as a turn of events take place, Bret’s planes for going away to college are put in jeopardy.

The story is about: KNOCK ‘EM DEAD, KID” is a film about a 19-year-old who yearns to leave his Connecticut hometown and go off to college. But as the days progress, the situations he finds himself in spiral out of control. He has run-ins with the police, problems with his girlfriend involving another girl, and a revenge attack he never should have involved himself in. Needless to say, sometimes life can be a real riot.

The story is about: KNOCK ‘EM DEAD, KID” is a film about a 19-year-old who yearns to leave his Connecticut hometown and go off to college. But as the days progress, the situations he finds himself in spiral out of control. He has run-ins with the police, problems with his girlfriend involving another girl, and a revenge attack he never should have involved himself in. Needless to say, sometimes life can be a real riot.

My thoughts: I‘ve once been asked, which was the better of the two categories: Mainstream of Indie? It’s hard to say which of the two is better over the other, really, because both genres bring their faire share of contribution to the table that is an equally balanced amount of entertainment for its targeted audiences. May it be an incredible heartfelt story shot with little to work with and with no major studio backing it finically, or a mindless action flick with an insanely large budget behind it, and with enough stars to light up a sky for a cast, sure indulging in a little mindless fun is always entertaining, and sometimes a few rare cases will come along that proves to be more than your typical summer popcorn flick, but to be honest, the Indie scene has always been greatly known for not only bringing the very same pleasures to the table as mainstream films, but also bringing it's own brand of award winning films that are original and unique. So this brought me to another thought, just how small can an independent film’s budget get? This train of thought led me to the film Knock 'Em Dead, Kid, this labor of love is the latest feature length by writer/director Christopher L. Golon. Before giving this film a round of viewing I did my own little research on it, and what I found was that the film has being described by some viewers as a blend between ‘Over the Edge’ meets ‘Kids’, well I personally wouldn’t put it in those exact words, but I will say that I can certainly understand why for such a comparison, the film’s plot is set with a backdrop that is surrounded around a group of young individuals living life in the moment and not a care for the consequences that may come with their actions. I personally found the film to be edgy and set with a relatively dark overtone that showed some light hints of dark humor here and there.

he film, it was very becoming of the times, but I’ll be honest here, when it came down to the film’s overall plot I found myself sealing adrift into boredom at times due to a lack of direction in its story, it’s not that the film was a major bomb in storytelling standards, no, but the direction that the film went at times seemed to blur the bigger picture rather than giving us a more clearer view, which isn’t to say the film is truly bad or anything, just seriously flawed. The plot holes do in fact play a big part in killing the film’s sense of direction and causes the viewer’s attention to wonder away from the film (except for a particular scene in the film where the viewers are treated to a very sexual eye catching make out session with Angela Nordeng and Michael Resendez), however the film’s shortcomings do prove to be a slight win for the film, because it’s ability to remain incoherent at times does if fact resemble the realism of the real world in more ways than you’ll ever realize. On a plus note though, the film does in fact have an original story that takes some big risks along the way. And to some extent viewers will relate to the character’s immaturity because much of it comes as basic rites of passage for all those that were once young and naive. I won’t go into further details, but I will say that the film is very gritty and street, which I did find to be enjoyable on a certain stand point. Also the fact that the film was made with a very low budget of three thousand dollars and still coming out looking a heck of a lot more is very impressive for my standards and director Golon defiantly gets my respect for it. If only a few things where done just a little differently this film would be a worthy film indeed.

As for the acting: Dirk Julian gave a fairly okay performance for a first time actor,

but at times I found his narration to be very weak and out of place to the current state of the plot at times, his acting on the other hand was on an adequate level but still felt a little two dimensional at times. Michael Resendez was not so bad, well let’s put it this way, he wasn’t as bad as I originally thought in the beginning of the film, the problems I had with his performance though was basically the equivalence to a cardboard box, though it looks full, it’s really empty and hallow inside. Of all the performances the one I had the most problems with was Chad Post’s performance as ‘Jim’ because I found his character to be way too stereotyping as your typical ‘stoner’, and lacked depth as a key character in the film, we are given the chance to see a possible sup-plot dealing with Jim and Jim’s alcoholic father but instead ended up with a single layered character who is easily forgotten in a blink of an eye. Torey Marks was a real doll, though her acting wasn’t entirely the best nor was it at all in the running, I must say that she had a certain glowing presence about her that naturally made the film just feel a little less dark and added a little touch of gleam. Erin Prieto (In my opinion) came off as your typical piece of eye candy for the viewers and nothing more, sadly though, she’s meant to be much more than that, however her lack of skill in the arts really does hurt the film in the sense of it not having a single strong point when it comes to its actors, however I’m confident that where she lacks as an actress she makes up as a bright individual, and perhaps she will prove me wrong in the near future. Angela Nordeng was okay, but there simply wasn’t enough of her on screen for me to give a valid judgment on her performance. Cody Cowell didn’t do the role of detective Krej any justice and do be honest didn’t really feel the part at all. However actor Al Burke did a great job playing the cop, in fact you could say he did it on quite a good level.

Final Say: KNOCK ‘EM DEAD, KID wasn’t exactly what I had hoped, but then again I didn’t really know what to expect when going into this really, and in some sense the film still receives some respect from me on the notion it was made on a budget that is considered next to peanuts compared to other films in its genre, and if the film's sub-plots where given a little more depth to them it would have really made this film something. I may not be one who’ll jump up to see this film again anytime soon, but I’d still wouldn’t turn down the offer to give it a second view one day.

Copyright 2009 TCWreviews.com
All Rights Reserved
Posted by Clifford Kiyabu at 6:01 AM