Review: Death at a Funeral (2010) [Reviewed By Kelsey Zukowski] 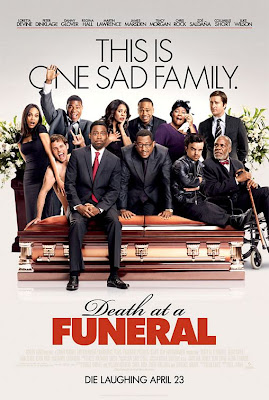 Death at a Funeral is one of the most unneeded American remakes. The original film is only 3 years old so there really isn’t any updating or bringing it to a new audience. It’s bad enough that Americans can’t read subtitles during a film thus an entire new movie needs to get made. Here though, it’s remaking a film that was already in English in to the same language, which is even more needless. That said, I actually enjoyed the American remake more than the original. The original obviously gets more credit for being creative and initially coming up with the idea. It was mildly amusing, but I found myself laughing through the vast majority of the 2010 version. Perhaps it’s because the American humor appealed more to me than the British did or that this film had such a stellar cast that was a joy to watch. Either way, the film works.

Aaron’s (Rock) father has just died and he is having the service at his house, following his father’s wishes. From the very beginning everything is going wrong. The wrong body is even brought to the funeral and they only have a pretty good idea of where Aaron’s father’s body is. Aaron is stressed about doing the eulogy. He is an aspiring writer, but hasn’t finished writing his first novel yet, while his praised brother, Ryan (Lawrence), has had multiple books published with great success. Everyone is torn that Ryan isn’t doing the eulogy since he’s not the oldest brother. Aaron knows this puts more pressure on him to deliver and just wants to give his father the respect he deserves. This becomes harder and harder to do as the day goes on.

A man in a leather jacket continues eyeing Aaron very mysteriously. Among other disasters such as his cousin’s (Saldana) high boyfriend, Simon (Marsden), knocking over the coffin and making the body tumble across the room, Aaron is confronted by Frank. He learns they were very close and in fact was his father’s lover. Since he wasn’t in the will, he wants $30,000 as compensation. If they don’t pay him off, Frank will show the photos to everyone, shaming his father at his funeral. Aaron is about to pay him despite needing the money to move out of his moms house and start a family with his wife (Hall) until he insults his writing. Ryan ends up knocking Frank down and they essentially kidnap him so he can’t show the evidence to the funeral guests. The same drugs that were in the falsely labeled valium bottle are given to Frank to calm him down. Simon is haluccinating, naked, and nearly jumps off a roof after taking just one and Frank was given 4. Soon it seems they might need a new plan as they might have overdosed him and could do hard time if they can’t hide the body. The cast really did help in making this a very enjoyable film. James Marsden was my personal favorite as the high as a kite, Simon. Marsden is a talented actor, always showing such great energy, spark, and charisma. It was fun seeing him here as it was really a chance for him to fully project all of that energy since the role was completely goofy and profiling a character who was not in his right mind, paranoid, and loopy. Marsden gave us the funniest moments in the film and anytime he was on screen he was a complete joy to watch. Chris Rock was only second to his performance as no one can really match his comedic timing and sarcastic and witty tone. He was sympathetic as our leading character, someone we could really watch the film through. I’m usually not particularly a fan of Martin Lawrence, but he did a pretty good job here as the self-centered and cocky, Ryan. His best moments though were when he was desperately trying to find a solution to the problem with Chris Rock’s character.

This is exactly the same role with pretty similar dialogue so if you saw the first you know what to expect from Peter Dinklage as Frank. He does well in the role, seeming suave and determined yet very casual and calm, as if he knows either way he’s going to win. Zoe Saldana did wonderful as Elaine, charming and strong. She is pushed to her limits in trying to keep up with Simon’s out of control actions, making it harder for her family to accept her boyfriend. Regina Hall did well as Chris Rock’s wife, although her character was pretty similar in most scenes as her main concern was having sex to get pregnant even in the morbid setting. Tracy Morgan is funny and enjoyable, but has had better roles. Luke Wilson did great as the dense yet determined Derek who was constantly after Elaine no matter how many times she rejected him. Columbus Short gave a good performance. His character was the only one thrown in between the two major disasters simultaneously going on.

Plot wise this film is identical to the original. It isn’t the same script though. The majority of the characters have different personalities and dialogue and particularly the comedy was redirected towards American culture. If you really liked the comedy in the original, who knows you might not like this as much. Personally, I felt these character felt more relatable, amusing, and fun to go along with on this ride. I think most people will be able to enjoy the film and have a fun time whether or not you watched and liked or disliked the original, or even if you haven’t seen it.
Posted by Kelsey Zukowski at 5:51 PM