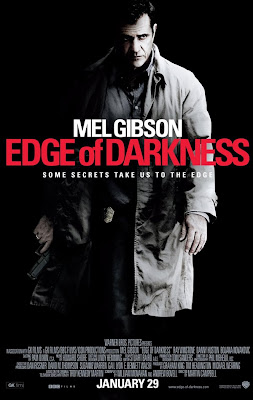 Plot: As homicide detective Thomas Craven investigates the death of his activist daughter, he uncovers

The Story is about: Thomas Craven (Mel Gibson) a homicide detective in the Boston Police Department. Witnesses his 24-year old daughter Emma (Bojana Novakovic) blown away by a shotgun blast at the doorsteps of his own home. Everyone assumes that Thomas, who was standing next to her, was the killer's intended target. However, Thomas begins to suspect that Emma was the real target. Driven by heartache and blame, Thomas initiates his own private investigation to uncover Emma's secret life and the reason for her murder. His investigation leads him down a dark and shadowy path of corporate and a government cover up that is bigger than he could ever imagine.

My Thoughts: There’s a phrase said various number of times in the film Edge of Darkness “Everything's Illegal in Massachusetts”, in short this phrase pays homage to the great state of Massachusetts for having some of tee most toughest of laws than any other state in the union, for better or worst some have even joked that this was their punishment for the Boston Tea party incident of 1773. No matter the truth behind it, one cannot deny it’s got a catchy ring to it.

People say you should fear those with power, because it’s they, the ones with the power in the

world who can take everything you love including your own life away from you in the blink of an eye if they deem it so. I on the other hand, humbly disagree with that assessment, because in reality the one you should fear most is not the one with the power, but the one with nothing left to live for, because they have nothing to live for they aren’t afraid to die which means they are to be feared most by those who control the game. Put any man in the right position where they stand to lose everything they hold dear to them, and I promise you they’ll be capable of doing unimaginable things that niter you or themselves could ever imagine. Which brings me to actor Mel Gibson’s latest film he stars in, Edge of Darkness, Gibson plays a police detective who’s just welcomed home his astringe daughter, whom he hasn’t seen in quite some time, not long after his reunion with his daughter two masked gunmen appear before his doorsteps with but one thing in mind, to kill, after witnessing his only child killed right in front of him, Detective Thomas Craven (Gibson) is left shocked and distressed as he struggles with coming to terms over the death of his daughter and feeling an overwhelming sense of guilt over the thought his daughter took a built that was meant for him, he works tirelessly to hunt down the men responsible and bring them to justice, but to his own discovery he learns that he was never the intended. As this story slowly unfolds we are treated with plot shocking twists and turns that the leave the viewers breathless, could this be the return of the Mel Gibson we fell in love with all those years ago? Well you have to read on to find won’t you!

me that this film was adapted from, nor have I read the original source material, which puts me in a spot for not being able to have a sense of comparison between the two to see witch was better. None the less, I still found this film to be very enjoyable on many levels. From it’s dark and tough as knells dialogue, to it’s somewhat dark sense of humor it lets peek into the film sometimes, Edge of Darkness is a film that revamps the classy Iconic Film Noir genre for a new generation to enjoy. I must worn that the film is not for everyone as it does follow through with it’s title for being incredibly dark, the film leaves no room for your typical Hollywood happy ending. But trust me when I say that a happy ending for a film at this stature would never work, it would actually destroy the final message the film delivers to it’s viewers “You had better decide whether you're hangin' on the cross... or bangin' in the nails.”. My only real big disappointment with the film is that; as astounding as the film’s plot was, it starts off on a rather slow moving pace and doesn’t really pick up in speed until about the half way point. Because of this hiccup the film often at times leaves viewers focus wondering away from the screen until the excitement begins to start, which I cannot stress enough how lost some viewers could be left at some point during the film, because much of the film’s ending is understood through heavy focus on the film’s first half which sets up the final end game. Despite this rough patch in the film, I found Edge of Darkness to be fully enjoyable thought provoking film that hit’s the viewers hard with an emotionally charged ending that is both dark and touching, Edge of Darkness is a film I wouldn’t mind looking into again someday.

As for the acting: when word started to spread about this film the first thing to come to my mind

was the same thought that was probably on everyone else’s; is this going to star the Mel Gibson we’ve all come to love and respect from his heyday in ’Mad Max’ OR, is this going to star the Mel Gibson we’ve come to know as simply, the Mad-Man? Well it’s safe to say we’ve been blessed with luck from above on this one, because while we don’t see the classic Gibson we all love, it’s safe to say neither do we see modern Gibson either. Instead what we get is a new side of Gibson, a side that ‘s older, wiser, and much more mature, I have a new found respect for the man after watching his performance in this film, a respect I had thought was long lost in the previous decade. This is defiantly a Gibson I look forward to seeing in future projects in the coming years. Ray Winstone is a real treat to watch in this, his acting chemistry works surprisingly well with that of Gibson, all I can say is a lot of ruggedness is seen between the two to really show off their qualities as actors. I admit I’ve never been too kind to Winstone’s past films (Beowulf, Fool‘s Gold ext. ext.) but I’m really liking the direction he’s been going in as an actor as of recently, especially in this film, here’s to hopping he sticks to it in the future. Danny Huston was fantastic in his role, mainly due to his ability to allow the role to take charge and never the other way around, if you’re like me (and have seen an insane amount of films he‘s co-starred in) than you’ll know perfectly well what I’m talking about. Bojana Novakovic was perfect for the role of Emma Craven, the daughter of detective Thomas Craven, she and Gibson matched perfectly together as father and daughter for the sort time they were on screen together. Gabrielle Popa who played young Emma Craven in the film’s flashback and daydreams was fantastic, which is a rarity for child actors in my opinion, sadly however, even though I’ve given high pries to the cast in this film and much to the film in general, one thing this film lacked terribly in was the lack of a strong enough female presence. Acknowledging the fact this film was made to be a straight-out thriller for a slightly more male viewing audience, the film’s overall background contain elements that swayed it towards a female audience just as equally and could have made this film all the more enjoyable to watch if there was a stronger female presence.

Final Say: Edge of Darkness was a fairly enjoyable film that didn’t go without it’s own share of rough edges. However, as doll as the film’s first half was, the film easily saves itself from certain cinematic death by pumping up it’s viewers with an exhilarating second half that provided a bitter sweet finale. The film may not have been all that it could have been, but something was certainly better having than noting at all, and I can go on content with just that. I recommend it.