Right now as we speak DVD and Blu-Ray disc players owned by the dedicated fan base of The Boondock Saints is on the verge of burn out from excessive over use since the release of the long awaited sequel ‘The Boondock Saints II: All Saints Day’ (2009) but one can completely understand the reason behind this, the fans have long been awaiting a sequel, 10 years to be precise, and the fan were not just given the sequel they’ve been waiting for, but the sequel they deserve! But now there’s going to be something entirely different that will be excessively used by the Saints loyal fan base! “THE BOONDOCK SAINTS II: ALL SAINTS DAY” ORIGINAL MOTION PICTURE SOUNDTRACK! That’s right people the long awaited sequel’s soundtrack is getting released on CD (Do people still listen to CD‘s anymore?!) and downloadable off iTunes! but don't just take my word for it, read on for more info on this below: 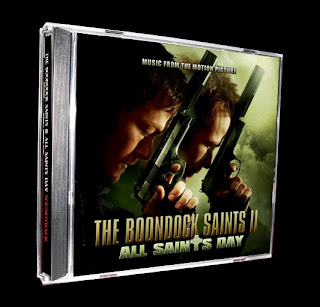 The much anticipated Soundtrack spans a range of sounds and styles, including innovative new stars such as Atlantic Recording Artist Ty Stone, The Dirges, Sean C. and former Lava Atlantic recording artists, Taylor and Troy Duffy. These stimulating tracks are featured alongside melodic tracks from the film’s score composed by Jeff Danna.

"Line Of Blood" and "Real Thang" are just two of a string of smashes Detroit-born singer-songwriter Ty Stone has racked up. Kid Rock says, “Ty Stone is an undeniable talent. He is Blue Eyed Soul at its finest. His powerful and soulful voice is truly something to witness, and the songs he writes are even better.”

The rousing sounds of the The Boondock Saints II: All Saints Day Soundtrack can be purchased at the following stores: http://www.boondocksaints.com/soundtrack/ , Hot Topic, fye stores, iTunes and Amazon. Other major retailers soon!

It is the new ‘must have’ item for all dedicated followers of Boondock Saints. Click the link below and check it out, as well as a sneak peek into upcoming comic books, mobile games and graphic novel currently in development! http://www.boondockstore.com/ . For more on the film’s Blu-ray and DVD release, please visit http://www.sphepublicity.com/.
Posted by Clifford Kiyabu at 4:39 PM