Last week the first official photo of actress Adrianne Palicki in costume as Diana Prince AKA Wonder Woman for NBC’s new Wonder Woman reboot was realest via Entertainment Weekly and it wasn’t long before the pic went viral. Well the results wasn’t exactly pleasant as a great many of the fan base wasn’t too please about the revamping of the amazonian princess’s battle attire (honestly though can it really be considered clothing of any sort when in factuality it‘s just a blue panty a red corset and a pair of boots?) the main argument about the change of look mainly dealt with the shiny bright blue latex looking pants and the changing of the boots from traditional red to matching blue.

Well it seems that someone high up must have been checking in on the forms regularly because they’ve immediately fixed what was already being considered disastrous for the reboot which is already being said by some for having one foot in the grave already. But when the production team was spotted out and about on the streets of Los Angeles this week onlookers got their first crack at seeing Adrianne in costume running up and down cars in the intersection while they filmed what I presume is a action sequence for the pilot. What caught most onlookers attention was the change in costume appearance… Well sort of that is, check out below and judge for yourself if you like the changes done… 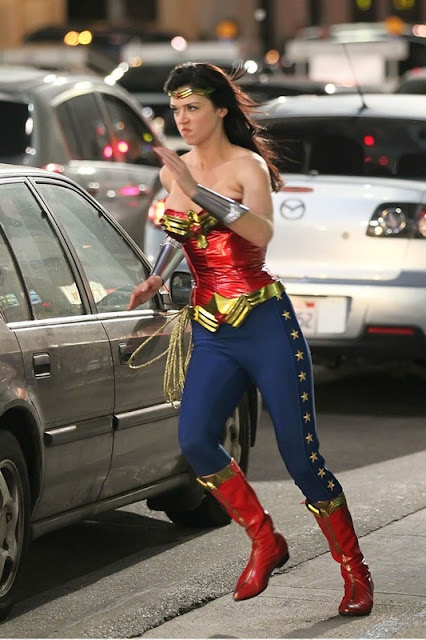 Side Note: Is it just me or does Adrianne Palicki look a little like Katy Perry in this new pic?
Posted by Clifford Kiyabu at 7:25 AM