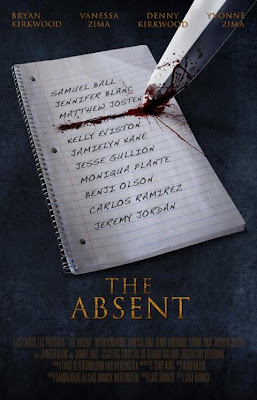 The best part of The Absent is the very beginning, which is more of a backstory than anything else. It shows two greedy parents who conspire to kill their own son so they can benefit off the insurance money. This sounds crazy enough, but watching them put this plan in to action is pretty entertaining. Even better, their son is no dummy. He knows what they’re doing.

Imagining what it would be like to be that age and for your parents, those who are supposed to care for you and love you unconditionally, to try to kill you is pretty hard to wrap your mind around. Luckily, this kid is smart and he decides to turn the tables on his murderous parents, leading up to their final bloody fall and Oscar’s jail sentence.

I’m not saying the beginning was anything great, but it was enjoyable enough just to watch everything unfold. Honestly, I think it would have been better as a short film just dealing with this subject matter. Instead, the film fast forwards to Oscar as an adult, getting out of jail. This already exposes two flaws: he would not have been in jail until he was nearing middle age, for a crime he committed at that young of an age, and it is not even clear if he was released or escaped from jail. The Absent is full of plot roles though, such as there only being one sheriff in the town and the only one investigating a string of grisly murders, leading back to a serial killer. So in retrospect these are some of the more minor offenders, the worst comes at the end, where the whole film falls flat and any merits that it did have being shattered.

Oscar comes back to find his brother, Vincent, having a relationship with one of his students. Without making his presence known Oscar sets out to help his brother keep his dirty little secret by killing off anyone who might be suspicious or have knowledge about the affair. One by one he kills off Vincent’s students, marked absent from there on out.

The acting wasn’t all that good, especially the parts with the sheriff, which were all in all just atrocious. They were cheesy, horribly overacted, and ridiculous. Some actors can bring out the best in those they work with, giving them something good to work off of. Sam Ball is the opposite. Anyone he was in a scene with he seemed to make worse, almost as if his bad acting was contagious.

I don’t know how much of the running time consisted of random landscape shots that didn’t appear to have anything to do what was going on in the film. It really just felt like filler. If it just looked beautiful then at least it would have been something pretty to look at, but the shots and scenery were nothing all that notable, for some reason though the cinematographer was clearly obsessed with them. There is even a horribly random cut to a wolf after a scene with Vincent and his student, then after a second or so cuts to another completely different scene.
I try to keep an open mind about a film until it’s over, even if my opinion is clearly being steered in one direction. I did this with The Absent, but it ruined anything it had going for it with the ending. If it was just a bad or pointless ending, that would be unfortunate, but even worse it tries to pull the twist ending that is so contrived and artificial; if it were true than nothing else we say in the film would be. I’ve seen this before and it’s one of my biggest pet peeves with films. Sure some can do the split personality, blurring the lines of internal and external manifestation like Fight Club, but most films that try this are kidding themselves if they think there is any real merit in what they’re doing aside from trying to trick the audience and shock them in to having the film stick with them.
Posted by Clifford Kiyabu at 3:03 PM