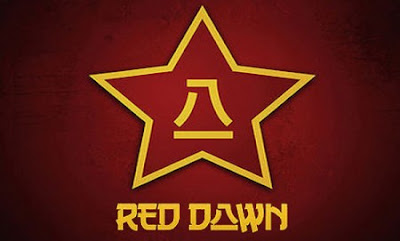 As a fan of the original I can tell you now that the RED DOWN remake is on the very bottom of my list because it’s completely and utterly unwarranted and unwanted. (And anyone who disagrees can suck it) I don’t care what anyone says, there isn’t a single person on the damn planet that can fill the shoes of Patrick Swayze, Lea Thompson, Jennifer Grey and Charlie “Duh, Winning!” Sheen. They just were the perfect cast for the perfect setting. The 80’s were indeed no doubt a high tide moment for the cold war which is what made the film’s setting work, this remake’s modern day setting with China being the occupiers over the US just sounds ridiculously cheesy (No I am not under China‘s payroll for saying that, I’m just stating a fact here how ridiculous that sounds, I mean why would they invade/occupy the US when they already own much of our debt to begin with?).

Anyway, it’s no secret that China is displeased with the choice of villains in the film and who wouldn’t when they’re being depicted as villains before an entire movie going audience (Let‘s face it, even the Russians weren’t too keen with the original for the way they were depicted onscreen, but it‘s okay because we won the cold war… right? Right?) Well I’m not insinuating anything but perhaps some high ups realized that demonizing China might alienating their upcoming multi million dollar film from most of the Asian market and has since then changed the main villains from China to, get this… North Korea! Yeah you read right, and I’m sure somewhere in Pyongyang an ailing Kim Jong Il is reading news of this and jumping up an down thinking this means the rest of the world will take him more seriously. But I digress, it seems that Ain't It Cool News received an email by the project’s producer Tripp Vinson whom explains why the sudden villain shift which ultimately shifted the film itself.

“I know there is a lot of interest and questions as to the changes announced regarding ‘Red Dawn.’

This movie has been rebooted because the filmmakers all love the original movie. The experience of seeing Red Dawn as a young boy in the middle of a Cold War, was life changing for me and a generation. I assure you that everyone involved with the reboot is keenly aware of the responsibility of delivering a movie that can stand eye to eye with the original.

The changes made to ‘Red Dawn’ in the last few weeks were made in consultation with military think tanks and people that specialize in game theory. Really smart people that spend their days constructing doomsday scenarios for our military and government. The type of people that know the limitations of the North Korean military. The type of people that can project a series of events that could lead to some very scary things happening to our Country. I can assure you, we listened well to those people, especially with regards to the capability of the North Korean military.

But! If you like meat with your potatoes, muscle cares that roar, tanks, guns and things blowing the fuck up by American’s kicking some Commie ass – the we have something special coming your way.

As many already know MGM went bankrupt recently which forced the remake to be shelved which completely knocked it off of it’s original release date so will these changes take the film off the shelf and back on the block or will they do nothing to save the film from remaining on the back burner?

To read more about this head on over to AICN

Side Note: personally I don’t think changing the villains is a bold move for a project this late in the game it only makes things look bad for the production.
Posted by Clifford Kiyabu at 4:44 AM